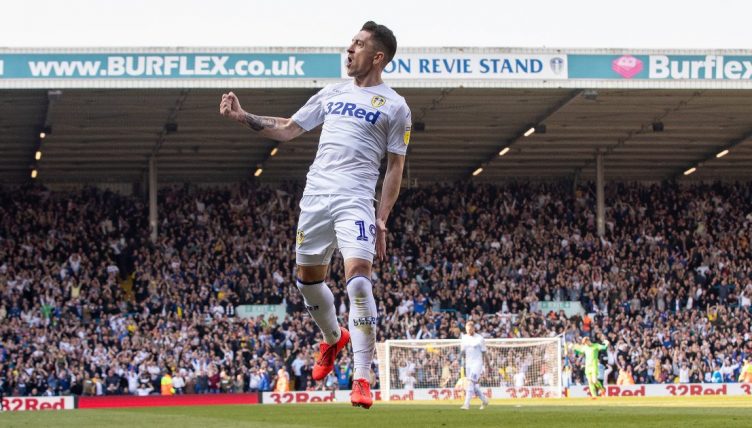 In the 14 seconds before the ball reached the feet of Pablo Hernandez, West Brom had kicked off and launched a long pass into Leeds United’s half of the pitch.

Liam Cooper had headed the ball clear and Jack Harrison had dribbled down the left wing to the edge of West Brom’s penalty area. All 20 outfield players on the pitch were in perpetual motion.

But then the ball was passed to Hernandez, and he stopped still. Two seconds later, it was in the top corner of West Brom’s goal, and Elland Road was shaking to its foundations.

In Argentina, they call it la pausa. When so much of football is a blur, it takes a player of class and courage to stand still and wait for the game to open itself up for them.

In Marcelo Bielsa’s homeland, they typically look to the No.10, the enganche, to provide la pausa. But Bielsa has never been one to indulge such talents. If the nine other outfield players are going to run themselves to exhaustion, then the tenth must do the same, even if that means denying himself the ethereal talents of Juan Roman Riquelme or Samuel Saiz.

In Bielsa’s world, there was no time to pause. Until he met Pablo Hernandez.

Just a few months into Bielsa’s reign as Leeds boss, he was asked whether he could improve Hernandez as a player. “I think he can improve me as a coach,” came the reply.

While the Spaniard was Leeds’ best technician alongside Saiz, he had already played at the highest level long enough to know that talent alone is not sufficient. When Bielsa arrived and Leeds’ squad had to change their diets and lifestyles to be able to cope with his demands, Hernandez was said to have had to make the fewest adjustments, such was the way he already looked after himself. As Leeds beat Derby 4-1 in Bielsa’s second competitive match in charge, it was Hernandez sprinting to the byline to keep the ball in play and stretching to give Gjanni Alioski the chance to score the Peacocks’ fourth.

Hernandez’s farewell to Leeds after five years on Sunday was so emotional because of the sheer number of such moments in which he married brilliance with bloody-mindedness. It is difficult to look beyond his goal at Swansea City to all but secure promotion, the most agonising of finishes to vanquish 16 years of pain, but the reverberations of that strike against West Brom will always be felt at Elland Road.

I’d gone to that game on my own. Life was feeling foggy and turgid, and Leeds United were matching my mood by doing their best not to win promotion, losing to a QPR side in freefall three days earlier in a result so damning Bielsa was pictured on his haunches, head in hands, outside the dressing room afterwards. If I was going to be drinking in the self-pity saloon, then I’ll have a table for one, thank you very much.

Sixteen seconds and one blast of Pablo’s right boot later, life had never felt better. After it was confirmed Hernandez will leave Leeds this summer, it was comforting to discover I was not the only one to have experienced the same emotions that night.

Hernandez is leaving. The week I was made redundant, I dragged myself to this game despite being depressed. 17 seconds in, Pablo did this and it just meant fucking everything. That noise. Thank you, Pablo #LUFC https://t.co/HQNcHHlTnQ

That season still ended in hurt, as Leeds missed out on promotion in the play-offs. The player Hernandez is so often compared to, Gordon Strachan, was able to lead the club to the top flight in his first full season at Elland Road and rode that wave of momentum until he had been named Footballer of the Year and made Leeds the last champions of the old First Division. Strachan, however, was signed by Howard Wilkinson, the man under whom he enjoyed all that success, whereas Hernandez’s legacy at Leeds is all the richer for the fact he had to first fail under Garry Monk, then fail again under Thomas Christiansen and Paul Heckingbottom, and, most painfully of all, fail one final time under Bielsa.

On each occasion, he refused to be beaten, belying his ageing body to find the strength to continue fighting until Leeds had finally achieved what we had all so desperately yearned for.

Amid fears the squad could struggle to reach the heights of Bielsa’s first season, Hernandez set the tone on the opening day of 2019-20 with a silent swagger, scoring a superb opening goal to get promotion up and running at Bristol City and producing a piss-taking double nutmeg just in case he hadn’t made his point emphatically enough.

Promotion was secured not without its wobbles nor anxieties, but the campaign culminated with Hernandez in cartoonishly brilliant form. Luke Ayling’s cut-back at Swansea could only ever have fallen to one man, while his shaming of Wayne Rooney and co after a guard of honour at Pride Park proved that maybe Leeds fans are allowed nice things after all.

It was too much to ask for the fairytale to continue into the beauty of Leeds’ return to the Premier League. Given it has felt like life has stopped for so many of us during the last 18 months, it is cruel that time has caught up with the one man who defied it for so long.

Hernandez could easily have played more this term. His post-substitution strop against Leicester City that earned him a spell on the naughty step overshadowed the fact that just moments earlier he had plucked the ball out of the sky, dummied past two players and curled a shot from the edge of the area against the crossbar. And within the first 20 minutes of his farewell appearance, he had pulled out a nutmeg, a backheel and an assist ruled out by an offside flag in one final reminder of the joy he has brought for the last half a decade.

But lamenting the frustrations of this season is missing the point. Leeds have only reached a place where they can move on because Hernandez dragged them here in the first place.

Now is a time for new heroes at Elland Road. But while Leeds United are moving on from Pablo Hernandez, I’m not sure I ever will.