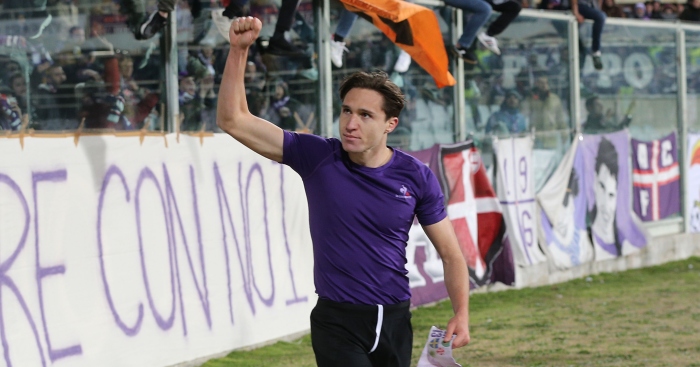 Fiorentina’s draw against Inter at the weekend had everything a fan of classic Serie A action could have hoped for.

The game at the Stadio Artemio Franchi ended three goals apiece, with Jordan Veretout firing home a last-minute equaliser from the penalty spot and inspired January signing Luis Muriel adding to his highlight reel with a thunderbolt of a free-kick from range.

However, it also had some lovely moments from Federico Chiesa, whose father Enrico also once starred for the Viola, and the youngster is one of a number of famous progeny making us pine for the days of James Richardson and Gazzetta Football Italia.

Twenty-one-year-old forward Chiesa, born when his father was part of Parma’s legendary late-90s side, has already hit double-figures for the season as he battles for top-dog status with fellow second-generation star Gio Simeone.

The pair contributed five of Fiorentina’s seven goals in a stand-out Coppa Italia demolition of Roma, but it’s not just about goals for the young pretenders.

Even within such an eventful game, Chiesa’s nutmeg on Matías Vecino stood out; it almost feels like the act of someone with the entitlement to run the game – someone who knows his name alone affords him such luxuries, while no amount of experience can stand in his way.

It’s as if he can make the Uruguay midfielder vanish into dust with little more than a snap of his fingers, allowing him to walk through unhindered in a way that leaves you wondering how it came to pass.

If Chiesa’s father had a magical ability to find the net with no warning, the younger man has shown a similarly bewildering knack to ghost into space as if finding a shortcut through clear air.

Chiesa and Simeone aren’t the only two forwards continuing a family dynasty at the top of the game, with Justin Kluivert beginning to make his mark on the league this season.

Having followed his father Patrick into the Ajax youth set-up, the Dutch international joined Roma as a 19-year-old and has already opened his account for the club in both Serie A and the Champions League.

Like Chiesa, he has begun his career as a winger despite being the son of a centre-forward, but this hasn’t stopped the teenager knowing where the goal is: he averaged close to a goal every four games in Amsterdam, and his first in Serie A showed great drive and energy as well as a composed finish to beat Genoa keeper Ionuț Radu.

The next man to leave us with pangs of nostalgia is one who hasn’t featured in Italy’s top division, though his father is well-known to more than a generation of Serie A fans.

Timothy Weah was born just a month after his father George left AC Milan for Chelsea and made his professional debut for PSG’s first team more than 20 years after his old man scored one of the all-time great Serie A goals against Verona.

More recently, though, Tim evoked George’s sharpness and self-assuredness on his debut for loan club Celtic. After racing through on goal and prodding the ball past Airdrie goalkeeper David Hutton, his celebrations began before the ball had even crossed the line.

He may not have even approached his father’s achievements, but if he displays even a fraction of the same energy it ought to be enough for him to act as a proxy for the most recent golden era of Italian football.

We’re sure to see plenty more children of great players begin to make their mark – we get it, we’re old – but we don’t need to use the situation to moan about nepotism or the like.

After all, if their mere presence is enough to remind us of some memorable moments from the games that got us into football to begin with, they’ll have done more than enough.