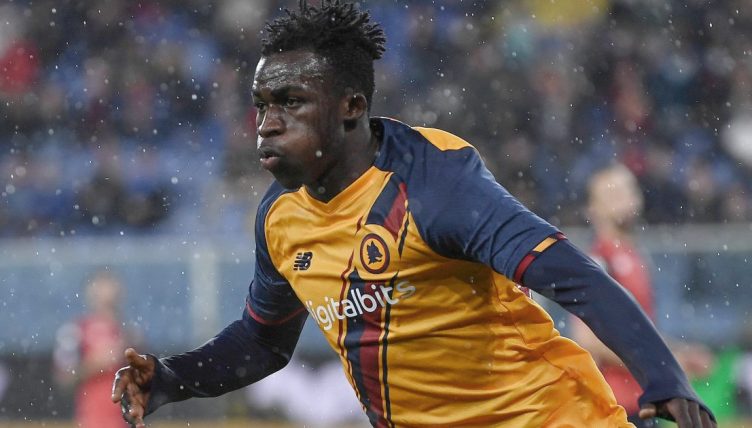 When Jose Mourinho sent on 18-year-old Felix Afena-Gyan on Sunday afternoon with his Roma side trapped in a deadlock with Genoa in the 75th minute, eyebrows were raised.

The Portuguese manager has always been capable of erratic decisions, and this seemed another ill-fated one as he overlooked Borja Mayoral and Nicolo Zanilo (say his name fast three times) to send the young Ghanaian on to make the difference.

Almost certainly some data-loving Roma fan was screaming in anger about how it was the wrong choice but, as with all gambles on youth, this was a play based on emotion as much as fact.

This time, the gamble worked. And boy, how it came off.

Afena-Gyan scored twice in the final ten minutes of the match to secure a vital victory for Mourinho’s side. The first was simple, completing a counter-attacking move with a finish across the Genoa keeper.

Cue wild celebrations, with the Ghanian running over to Mourinho who, whilst the bench went crazy, pointed to his head to signal that the match was far from over and that his team had to concentrate.

The 18-year old forward, however, must have interpreted that as ‘go ahead and score a banger’, because just before the end of the match he promptly fired in a nitro-powered rocket of a shot that announced his arrival in Serie A and sent his reputation into the stratosphere.

Two goals in 12 minutes for the 18-year-old! 👏 pic.twitter.com/gLsLPYdOkr

It was the sort of goal that makes you involuntarily shout ‘ohhhhhhhhhh’ no matter where you are or what you’re doing. It tickles that part of your brain that makes you want to watch over and over again from every angle, sped up and slowed down.

Afena-Gyan picked the ball up perfectly in stride, taking one touch to steady himself as if he had been expecting to be in this exact position. It was almost rugby-esque how the ball popped up perfectly for him to run onto, but everything else that followed could only happen in football.

With his trailing foot bent on its side to give him a better angle and more power, the young forward manipulated his foot around the ball to send his shot curling powerfully towards the goal.

It hurtled through the air, the angle confusing Salvatore Sirigu who could only reach desperately for the ball as it flew past him and thumped into the back of the net. It was not in the top corner but it didn’t need to be. The pace, the angle and the curve were more than enough to beat any goalkeeper.

The celebration was good, too. All smiles, Afena-Gyan pointed to himself as if to say, ‘Yep, that was me, I have arrived’, before being mobbed by his teammates.

It was still a costly decision for Mourinho.

“I had promised to buy Felix the boots he really likes, which are really expensive, they cost €800, so he ran over and told me not to forget!” Mourinho said to DAZN after the game, explaining the celebration for the first goal.

“You get these kids now who think they know everything, but he is humble and you can sense he just absorbs all this information from everyone around him. That’s fantastic.”

Afena-Gyan is another in a long line of young players to announce themselves with a stunning individual performance right when his team needed him.

Until last year he had been playing school football in Ghana for EurAfrica Academy and after impressing with Daniel de Rossi’s Under-19 side he has broken into the first team, his enthusiasm-fuelled dismantling of Genoa ensuring he won’t be leaving the first team squad anytime soon.

Profound to note, Roma's Felix Afena-Gyan (arrowed), who scored a superb brace vs Genoa tonight, was playing for High School Team just a couple of months ago in Ghana 🇬🇭

First player born in 2003 to score in Seria A. pic.twitter.com/J7AdWqdFI7

Of course, social media declared him the next big thing almost instantly. Someone would have immediately been on to his agent offering a sponsorship deal and in a couple of weeks time you will probably see transfer rumours about him joining Juventus or Barcelona or any other big name that will bring in clicks.

But all that takes away from the joy which the unknown factor of a young player brings.

There is no way to know whether this was a one-off performance and Afena-Gyan will fade away; whether this is a Marcus Rashford situation or a Federico Macheda flash-in-the-pan moment.

Yet therein lies the excitement. Imagining the young man leading an energetic Roma side to Coppa Italia glory or lighting up the AFCON with Ghana is a guilty pleasure because, whilst you don’t want to heap pressure on him, the possibilities are thrilling.

We live vicariously through youngsters like Afena-Gyan who are living our dream, who had their opportunity and seized it. We want to share in their triumphs and successes because in such a way we can imagine they are ours too.

So forza Roma, forza Afena-Gyan and forza exciting young players. Long may they light up our imaginations.