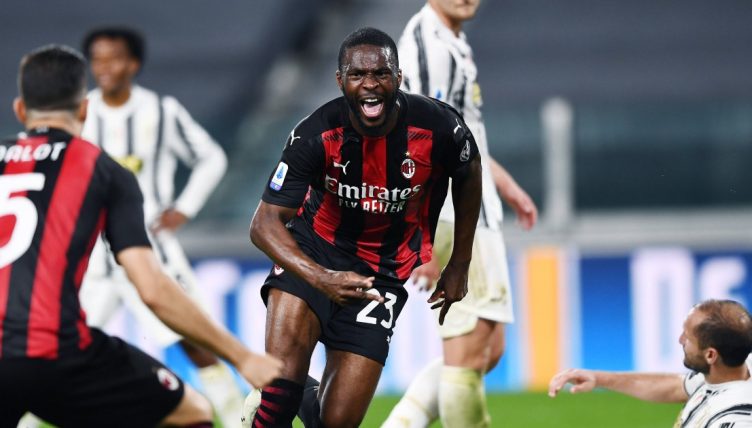 It’s easy to focus on central defenders on the rare occasions that they pop up in the opposition penalty area, climb above their marker and nod the ball past the goalkeeper.

Usually, a centre-half’s work is a lot more subtle and unobtrusive than their more attacking team-mates. They are the foundations on which football teams are built and foundations are out of sight and out of mind.

So to lavish Fikayo Tomori with praise just after he has scored his very first Serie A goal to hand AC Milan a 3-0 win over Juventus and put them in the box seat to achieve Champions League qualification is a bit of a cop out, you might think.

But worry not. We’re not going full Garth Crooks on you. Not yet, at least. The goal was brilliant, we’ll admit. Tomori made Giorgio Chiellini’s attempt to jump with him look like Muggsy Bogues trying to jump with Michael Jordan. It was a vital goal, too.

But here we are not distracted by shiny trivialities like putting the ball in the net. Here, we respect the fine arts of the wily centre-back. This an appreciation of Tomori the defender, the man who may as well have spent Sunday night’s game at the Allianz Stadium holding a sign that read: Oi, Cristiano, the Europa League is that way.

The Chelsea loanee was magnificent from start to finish. He cut out crosses, blocked shots, intercepted passes and anticipated attacking runs. When in possession he kept it simple.

Let’s go for a few numbers. Seven clearances, three blocked shots, three interceptions, three tackles, 100% success rate in aerial duels, 88% pass completion. Is that enough for you? It certainly seemed to be for Paolo Maldini, who smiled behind his mask as he watched from the stands.

It was a display to prove why a legend like Franco Baresi said that Tomori “can potentially become a great champion.”

Through Tomori’s barrage of defensive interventions, though, there still was a moment that stood out above the rest for its symbolic value as well as its skill.

As the game approached the final 10 minutes, and with the score at 2-0 to Milan, a slightly forlorn-looking Cristiano Ronaldo ran into the channel on the right side of the Juventus attack. He hadn’t received the ball cleanly in the box all day, so he must have felt that pulling wide was his only chance of having some impact on the game.

Tomori, though, wasn’t about to give up because Ronaldo had drifted a few yards from the centre. The centre-back tracked Juve’s robo-striker towards the corner like one of those red shells from Mario Kart following its target.

He was quicker than Ronaldo, stronger than Ronaldo and as soon as the ball arrived at Ronaldo’s feet, the England international dumped him unceremoniously onto the ground, where the former Real Madrid man lay for a second, coming to terms with the domination of Milan’s 23-year-old revelation.

Worse than that, Ronaldo may well have been contemplating the prospect of playing Europa League football for the first time since 2002.

With the win, Milan leapfrogged Juventus in the table. And with Napoli having smashed Spezia 4-1 on Saturday, Juve were down in fifth, looking up longingly at the top four.

It is not a position they have been particularly used to occupying over the last decade and it’s fair to say Andrea Pirlo’s first season as a manager hasn’t quite gone to plan.

To make matters worse for the Bianconeri minutes later, Tomori popped up with that header. And as we said, it was a vital one.

Fikayo Tomori puts the icing on the cake for Milan! 🔴⚫

If teams are equal on points come the end of the season, league position in Serie A is decided by their head-to-head records. With Juventus having won 3-1 at San Siro in January, Milan will, with their 3-0 win, finish ahead of Juve should they have the same number of points after the final day. Given it’s so close at the top of Serie A, that’s a big plus for Stefano Pioli’s side.

For Tomori though, the goal was merely the cherry on the icing on the big, solid cake of a defensive masterclass that he had baked over the preceding hour and a half.

First and foremost, he is a centre-half. And like so many who have preceded him in the red-and-black-striped shirt, he seems to love the subtle art of shutting out the opposition attack. If Milan don’t make his loan permanent at the end of the season, then, frankly, they’ve lost their collective mind.