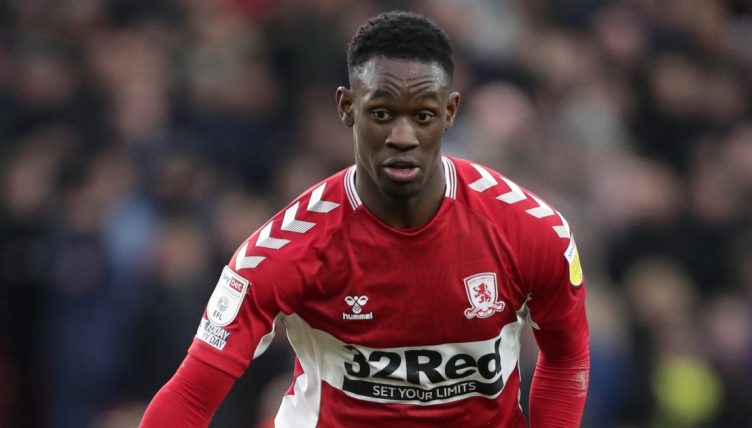 There are many ways of endearing yourself to Arsenal supporters.

You can go down the Aaron Ramsdale route and star in an advert promoting a local chippy – even if David Seaman steals the show with an expertly-timed cameo.

Or you could don yourself in the latest retro gear, definitely not released to distract attention from Arsenal’s latest insipid defeat, and pout in front of the assembled cameras.

But the quickest way to capture the heart of Arsenal supporters is by humiliating Tottenham Hotspur. Which bodes well for young forward Folarin Balogun.

Balogun has quickly outgrown the Under-23s, scoring 15 goals in 13 appearances at that level this campaign, but had found senior game time hard to come by due to the competition for places at Arsenal.

The 20-year-old moved to Middlesbrough in January and has already impressed the Teeside locals during his loan spell. Balogun picked up a match-winning assist in just his third appearance for Boro and played a key part in their FA Cup victory over Manchester United at Old Trafford.

With Arsenal struggling for strikers and goals, despite their improved fortunes under Mikel Arteta, many of their supporters have looked to Balogun to provide hope for the future.

Hope that they don’t need to spend £80million on Dominic Calvert-Lewin and his tortellini limbs. Reassurance that Dusan Vlahovic wouldn’t have necessarily been a slam-dunk success. Ammunition against the accusation that Pierre-Emerick Aubameyang was relinquished too easily.

And the New York-born striker tapped into the psyche of your average Arsenal fan to provide the answer; pick Tottenham’s most high-profile defender and leave him wishing he’d never left Argentina.

In front of a sold-out Riverside Stadium, Chris Wilder’s Middlesbrough rose to the occasion superbly while Spurs produced a performance that was the footballing equivalent of a contemptuous shrug.

Balogun was introduced as a second-half substitute and lodged himself into the subconscious of the Spurs defence with impish ease.

Quick, skilful and confident receiving the ball and attacking the opposition, Balogun’s presence was the last thing Spurs wanted on a night where banana skins and rakes competed for space on the Riverside pitch.

And Cristian Romero was subjected to arguably the biggest debasing of the 2021-22 season.

As Balogun received possession near the touchline, the Argentina international lunged into a tackle with the complacency of Montgomery Burns attempting to rob candy from Maggie Simpson.

But he’d underestimated the wily nature of his 20-year-old opponent. Rolling his foot over the ball in a titillating fashion, Balogun waited until the Spurs defender had fully committed himself before slipping the ball through his legs.

As Balogun raced into the penalty area, with a flat-footed Romero left contemplating a career change, we were left with the slightly uneasy sound of purring from BBC co-commentator Danny Murphy.

But it was understandable. Most of the watching Arsenal fans were doing the same.

Folarin Balogun's skill against Cristian Romero as Middlesbrough knock Tottenham out of the FA Cup.pic.twitter.com/UtqyYLjG56

Celebrating a momentous victory on social media, Balogun, who signed a long-term contract extension at Arsenal nearly 12 months ago amid speculation he was ready to leave permanently, pointedly wrote on Twitter: ‘Big result against familiar rivals.’

And, just like that, Balogun cemented his status amongst Arsenal supporters without kicking a ball for the north London giants.

“With Flo especially and the number of minutes that he played here, and the level that he shows when he can only play with the under-23s, it was not fair,” Arteta said last month about the decision to send him to the Riverside.

“If we want to develop that player and maximise his potential, which is huge, we have to expose that player as quick as possible to the level he needs to be exposed.

“I was really confident that for him it was the right option and he was convinced, so when that happens we have to let the player go.”

By humiliating Romero and Tottenham, Balogun has done a sterling job of enhancing his Arsenal prospects for next season.

And it could even save Arteta a few quid in the transfer market.