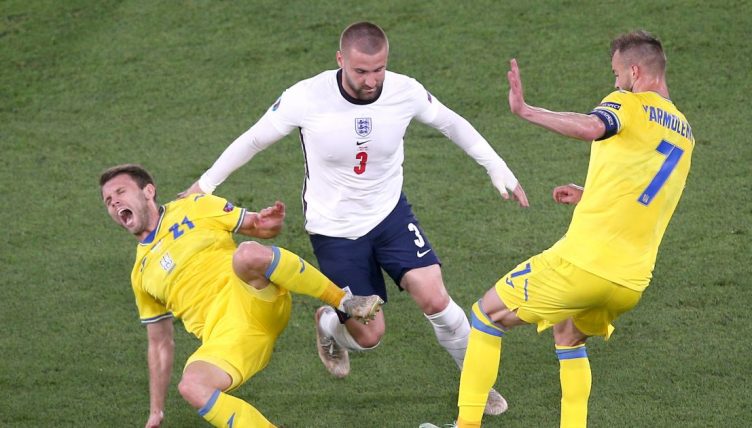 “Shaw had a good performance but it was his body with my brain,” Jose Mourinho said after Manchester United‘s draw with Everton in April 2017. “He was in front of me and I was making every decision for him.

“The communication was possible because we were very close. I was thinking for him, when to close inside, when to open, when to press the opponent, I was making every decision for him.”

Mourinho gave Luke Shaw damning criticism on a number of occasions during his two-and-a-half years at United. No matter what Shaw did, Mourinho found a way to dig him out.

The duo had a turbulent relationship at Old Trafford and Shaw looked a shadow of the player that had won plenty of plaudits at Southampton.

Since Mourinho’s departure in December 2018, Ole Gunnar Solskjaer has proved that helping a player regain their confidence is actually far better than tough love. Who would have thought it?

The left-back produced his finest form in a United shirt throughout 2020-21, winning their Players’ Player of the Year award and earning a place in the PFA Team of the Year.

Having missed out on the 2018 World Cup, Shaw also forced his way back into Gareth Southgate’s England squad and was eager to make up for lost time at Euro 2020.

But he remained on the bench for the win over Croatia and struggled to make an impact against Scotland, something Mourinho was clearly eager to point out.

“For me, he [Shaw] is not a guy to take set-pieces or be in the box to win a duel in the air,” Mourinho said in The Times. “He is very fast and a perfect position is to stay back on corners to cope with transitions.” Talk about damning with faint praise.

Yet after recently becoming the latest player to publicly hit back at Mourinho, Shaw decided to let his feet do the talking for him.

He set up Raheem Sterling’s opener in the win over Germany and put on a show against Ukraine at the Stadio Olimpico, home of Mourinho’s new side Roma.

With Mourinho’s comments still ringing in his ears, Shaw seemed determined and stepped up to take a free-kick from the left wing in the 46th minute.

The 25-year-old whipped a pinpoint cross onto the head of United team-mate Harry Maguire, who emphatically headed home into the corner of the net to put England 2-0 up.

Not bad for someone who shouldn’t be taking set-pieces.

📱"Show me a perfect start to the second half…"

📲"I've found this from Harry Maguire."

Shaw refused to rest on his laurels after getting the assist for Maguire, smelling blood in the Ukrainian backline.

While Mourinho’s brain would probably have told him to sit back and defend a 2-0 lead, the defender has seemingly adopted Roberto Carlos’ mindset and continued making powerful advances down the left wing.

During the 50th minute, he glided past Raheem Sterling and collected Sterling’s delightful flicked pass on the overlap before floating an inviting cross for Harry Kane to score his second goal of the game.

Having been criticised for perceived weight issues in recent years, Shaw was now the one feeding Mourinho some humble pie.

His two deliveries turned what could have been a nervy 45 minutes into a rout for the Three Lions. Even the most pessimistic England fan knew that they had booked their place in the semi-final.

He also became just the second English player to provide three assists at a single European Championship tournament, following in the footsteps of David Beckham. That’s some pretty good company.

Beckham was undoubtedly watching the game from home and would’ve been proud of the brilliant crosses that Shaw put into the box.

Alongside his attacking skills, the full-back has also been part of a defence that is yet to concede a single goal at Euro 2020. Southgate’s side is built on strong foundations and Shaw hasn’t put a foot wrong at the back.

He has been branded ‘Shawberto Carlos’ by fans and team-mates, while Roberto was clearly impressed by his performance against Ukraine.

After watching Shaw’s stunning display on his new home turf, Mourinho had no choice but to begrudgingly accept that he had lost this battle.

“Luke Shaw is playing better and better and better,” Mourinho told talkSPORT after the game. “I think the back four with the amazing Euros that both central midfielders are doing is more than enough to control Denmark offensively. And then you have four players to decide the creativity of the game.”

Admittedly, the Carlos comparisons are just slightly premature at this stage. After all, he’s yet to add stunning free-kick goals to his repertoire of skills.

Although, a Euro 2020 semi-final against Denmark would be a pretty good place to start….