Forget Neymar, Allan Saint-Maximin is the Ligue 1 showboat for you 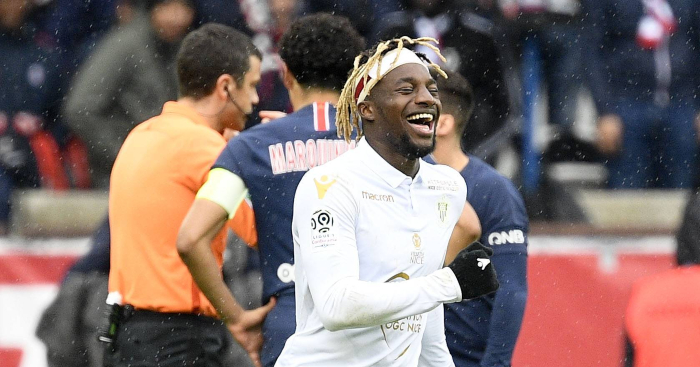 Allan Saint-Maximin, the tricky Nice winger, is one of Ligue 1’s greatest entertainers. Here’s hoping he ends up in the Premier League.

If you’re a footballer and dribbling happens to be your USP, then being ranked for dribbles per game in between Lionel Messi and Eden Hazard — two of the best with the ball at their feet — is surely no bad thing.

For Allan Saint-Maximin, however, it’s now par for the course.

Over the last few seasons, the Nice winger has cemented his reputation as one of France’s most graceful players, honing his ludicrous ball skills on the Côte d’Azur, sending defenders one way then the other and invariably going back to beat them a second time.

He’s gradually adding more end product, too. After registering three goals in his first two seasons with Nice, the Paris-born youngster doubled his tally over the 2018-19 season, grabbing half a dozen to become the club’s joint-top goalscorer.

But that minor honour — made possible by Mario Balotelli half-arsing it during the Autumn then sauntering off to Marseille — is not really what Saint-Maximin is all about.

Rather, the wide man is pure trickery, blessed with a vision and spontaneity that makes his various twists and turns difficult to counter… and difficult to categorise.

Allan Saint-Maximin: Completed more dribbles (143) than any other player in Ligue 1 this season

Rather than execute a premeditated trick, Saint-Maximin is more likely to nudge the ball one way then the other in increments, having the physical and mental quickness to react based on the defender’s movement.

One move turns into another at lightning speed, and after one defender is sold the dummy, another is sure to follow.

Bertrand Rebours, one of Saint-Maximin’s youth coaches in Paris, put it best: “He may be surrounded by three players, but he is still going to try something. He has no fear. He always keeps cool and never overthinks.”

When the winger does score, however, the goals tend to be as spectacular as his tricks.

Back in 2017, for example, Saint-Maximin scored a stunning brace for France at the Under-20 World Cup, catching the attention of many a talent scout. Indeed, he would move from Monaco to Nice just a few months later.

His first of that particular game was a rocket from the edge of the box, while his second was, for the more empathetic viewers out there, actually quite hard to watch.

Toying with his marker, Saint-Maximin danced back and forth on the left touchline as though he was running down the clock in the fourth minute of stoppage time.

He then pinged the ball, from way out wide, over the very humbled New Zealand goalkeeper, finding the top corner with something you may well classify as a ‘cross-cum-shot’.

That sounds like a criticism, but the ambiguity of the strike doesn’t diminish its quality at all.

But Saint-Maximin is entertaining for more than just his dribbles and occasional goals.

In January 2019, the Ligue 1 showman made headlines for different reasons. No, he didn’t kick a youth player after getting nutmegged; rather, he wore a red-and-white Gucci headband in a game against Bordeaux.

That in itself needn’t have made headlines — it did, of course — but Saint-Maximin’s subsequent request that EA Sports include the headband to his FIFA likeness was certainly worthy of the footballing internet.

Clearly, Europe’s seventh-best dribbler has a sense of humour that suits his on-pitch antics.

@EASPORTSFIFA could you put that headband on me in-game?

Not that his fun-loving attitude has endeared him to everyone. In fact, Nice manager Patrick Vieira — a man who, in his playing days, was more of a battleship than a showboat — has publicly castigated the player for lacking dedication.

“Allan’s problem is that sadly he thinks that talent is enough to go to the highest level,” Vieira said. “And he needs to understand that he needs to work, to make sacrifices. He needs to suffer. Sadly, he has not yet understood that.”

At least, it’s sad if you happen to be Patrick Vieira or a very sombre Nice supporter. For those of us who just want Saint-Maximin entertainment on a semi-regular basis, it’s a non-issue: everyone knows that a laissez-faire attitude to tracking back is not just tolerable, but more or less integral to being a true showman.

Do we want to see flair players helping out their full-backs? Do we balls. We want them to stand on the halfway line with their hands on their hips, putting in yards when they damn well feel like it. The sooner Vieira accepts this the better.

The question now is: Which set of fans will get to see Saint-Maximin not-tracking-back at their stadium next season?

The Frenchman has been linked with AC Milan since January, but rumours of interest from Everton, Newcastle and Crystal Palace have also been heard in recent weeks.

“I certainly feel ready to move up a level and go to a more prestigious team, but for now I still feel good at Nice,” Saint-Maximin told La Gazzetta dello Sport in May.

“It is up to me to continue to have these performances, helping my team as much as possible and then we’ll see at the end of the season.”

If the Premier League loses Eden Hazard this summer, then Saint-Maximin — one place higher in the dribbling charts, remember — would be the perfect replacement.