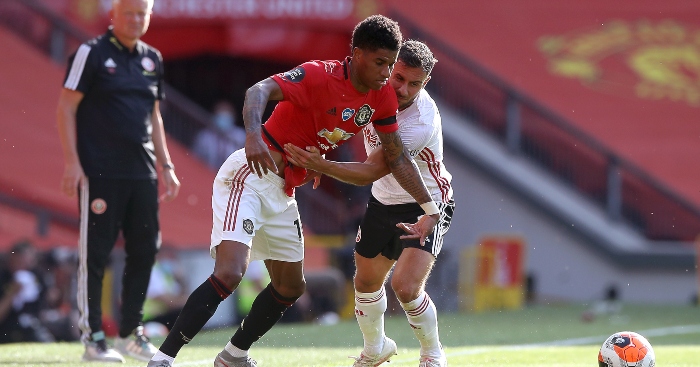 Marcus Rashford may have missed a sitter in Manchester United’s win over Sheffield United, but he’s back to embarrassing defenders – and that’s what really matters.

The England forward has justifiably received praise for his off-field actions, bringing the more cynical observers to question whether the responsibility of his work away from football might distract from the task at hand.

However, just as the ink was drying on those repetitive “stick to politics” wisecracks as Rashford fired wide of an open goal, he was back to embarrassing defenders as if nothing had changed.

Rashford’s role in the move begins thanks to his work tracking back, blocking a cross from the overlapping Chris Basham. Was his defensive contribution born out of an urgency to make up for his earlier error? If it was, then maybe we should encourage him to make even more mistakes.

As necessary as the first intervention might be, the decision to take the high road has little value beyond making Rashford look better than he might have done if going for the more straightforward option.

We realise now that this sounds like a criticism, so let us make one thing clear: needless showmanship is always, unequivocally, better than not doing that.

“Oh, you like tactical innovation?” Rashford asks as he lifts the ball over the defender’s head. “Well, innovate this.”

It doesn’t stop there, of course.

Rashford has shown lately that he’s all about equality and giving everyone the same resources regardless of initial opportunity.

It makes sense, therefore, that he would be willing to give a second Sheffield United defender just as good a chance of being humiliated live on TV.

George Baldock is the second recipient of what will from here on out be known as a ‘Rashfording’, with the Manchester United man gracious enough to pause, look around for a second, and wait for the right-back to step up for his punishment.

Baldock’s sprint is far from aimless, essentially rejecting balance in favour of urgency as he sprints from point A to point B, but it is single-minded enough that he fails to twig Rashford drawing to a stop and focusing on the space between his legs.

Basham isn’t going back in, for fear that he becomes the victim for a second time, leaving room for Baldock to essentially walk into his own nutmegging via a hastily assembled red carpet.

The biggest surprise isn’t that Rashford executes it perfectly – he has the perfect view to prepare and deliver the nutmeg, after all – but that Baldock immediately drags him back for a free-kick rather than taking his punishment before turning to the forward and politely asking, “Please sir, may I have another?”

The resumption of Premier League football behind closed doors might have instilled fears in some that the lack of a live audience would remove some of the game’s showmanship.

Thankfully, though, Manchester United’s forward line – not just Rashford – recognised the entertainment factor doesn’t diminish when the audience is watching from their sofa rather than in the stadium.

With Rashford’s nutmeg and with Anthony Martial’s delightful dinked finish for his hat-trick, we saw a version of Manchester United visibly free to pull off the kind of plays they’d love to be watching themselves, and if anyone is a good judge of entertaining football it’s surely entertaining footballers themselves.

We can only hope someone has also gone to check on George Baldock and made sure he’s been able to pick up his pride, because it would be an awful shame for him to have left it strewn across the Old Trafford turf, never to be recovered.