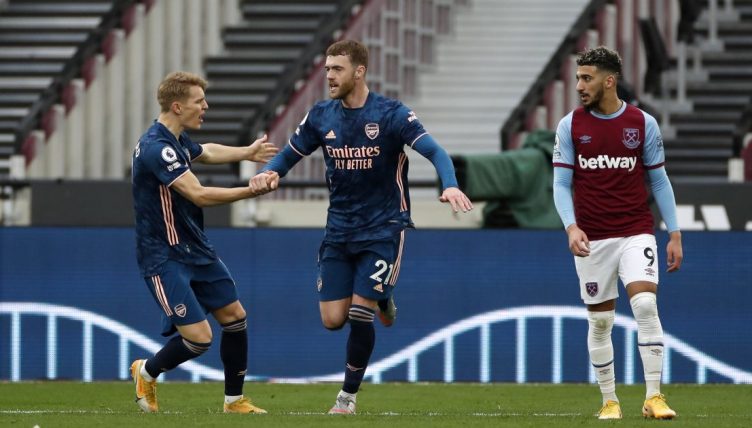 Arsenal already have the Croydon De Bruyne – a fact of which football commentators never tire of reminding us.

During their wild 3-3 comeback draw with West Ham at the London Stadium, Mikel Arteta also found he’s got the Petersfield Dani Alves in his squad.

It was just a third start of the season for Calum Chambers after spending almost a full year out with a cruciate ligament injury. But you’d never have known it.

The 26-year-old stormed up and down the Arsenal right like he was going through the full repertoire of tricks in that YouTube compilation of Brazil’s greatest full-backs he watched on repeat whilst laid up with his crocked knee.

Chambers cross for Arsenal’s first goal was good, whipping the ball into Alexandre Lacazette after Martin Odegaard had fed him down the flank.

His cross for the second was even better, pummeling a pass right down the corridor of uncertainty after a delightful reverse ball from Odegaard and forcing Craig Dawson to turn the ball into his own net.

But it was another moment between those two own-goal assists that really made us sit up, squint at the telly and think: who are you, which Brazilian beach did you learn to do that on and what have you done with the Calum Chambers we used to know?

Just two minutes into the second half, Chambers drifted from the right flank, received the ball from Alexandre Lacazette, lifted a right arm and pointed his index finger in behind the West Ham backline as if to say, ‘Go on Alex, I’m gonna stick it right in there for you.’

He did, too. With the outside of his right boot, Chambers played an inch-perfect, lobbed through-ball over the heads of Dawson and Vladimir Coufal and straight into the path of the Arsenal No.9.

The France international made a brilliant run into the box before getting his shot away, using the bounce on the pass to dink it over Lukas Fabianski and seeing his effort excruciatingly cleared off the line by Issa Diop.

It might not have quite got the desired result, but the Arsenal right-back’s pass was a work of genius.

Jamie Carragher compared Chambers to Cafu later in the half for the way he was bombing up the wing, but at that moment it was more like watching former Brazil defender Junior in the full-back-cum-inventive-No.10 role that he made his own for years with the Selecao and Flamengo or Dani Alves at his swashbuckling Barcelona peak.

A Chambers love-in soon broke out on social media and Arsenal’s fans were joined in their praise of the right-back by Arsenal’s players and manager post-match.

“[Chambers deserves] a lot of credit because he came back from a big injury,” Lacazette said. “He worked a lot in training, individually as well. When he had a chance he showed that he can play for Arsenal. I’m very happy for him.”

Arteta concurred: “He was really good. He’s been training really well. He gives us something else, some height in the backline. He was really efficient in the final third as well. He had a great performance.”

There has been plenty of talk of Arsenal’s current first-choice right-back and tree-hugging, snazzy-attire-wearing, all-round good guy Hector Bellerin moving onto to pastures new in the summer.

Yet if Chambers is playing like a marauding superstar Selecao full-back, they won’t need to be worried about who will come in to replace Bellerin.

In the Petersfield Dani Alves, they already have their man.