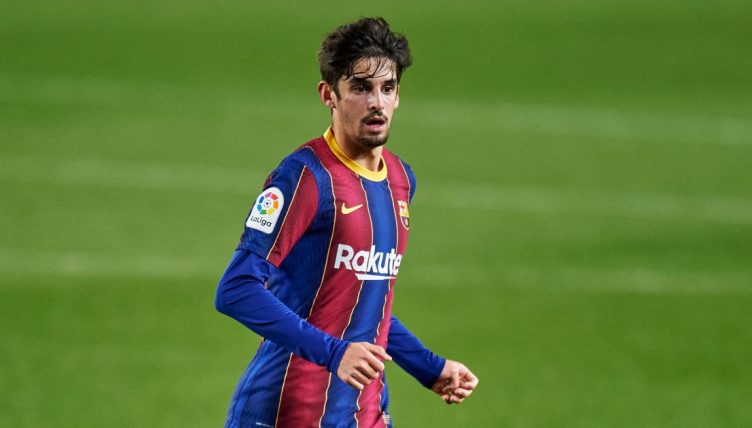 To say this season has been tough for Barcelona would be an understatement verging on the ridiculous.

After the Lionel Messi transfer saga came to an uneasy end there has been a dire run of form, some disastrous financial results, the resignation of club president Josep Maria Bartomeu, the postponement of the election to choose his permanent successor and the leak of Messi’s whopping €555million contract.

But in among the dark clouds of the ongoing football-political shitstorm, there have been a few bright spots, a few little things that Barcelona fans can hang onto with hope for a better future.

Fleet-footed young midfielder Pedri has without doubt been the most dazzling among them, but on Sunday night in Seville, they saw another too, in the shape of 21-year-old Portuguese winger Francisco Trincao.

With Barcelona trailing to Real Betis, Trincao was introduced alongside Messi with an hour gone. Between them, they proceeded to win the game for Ronald Koeman’s side.

The Argentina international was the first to strike, finishing low and predictably brilliantly from 17 yards. Then Messi’s pass set up a Victor Ruiz own goal to put Barca ahead before Ruiz fired in at the right end to pull Betis level.

Barcelona needed a win to go back level on points with arch-rivals Real Madrid in La Liga and stay within sight, if not exactly touching distance, of Atletico.

Trincao, for the first time since his €31million move to Catalunya last summer, was the man to provide the goods.

With just three minutes left on the clock, the ex-Braga player picked up a loose ball and as Betis defenders dallied around the edge of the box, took one touch inside onto his preferred left foot before directing a thunderous effort off the underside of the crossbar and in.

What a moment for Trincao! 😱

A great strike for his first LaLiga goal and a potential winner in this one for Barca 🔵🔴 pic.twitter.com/oRshe8Cxl3

Alright, it might have taken a slight deflection on its way through, but the shot was struck with fine technique and real conviction.

And given how long Trincao has waited for it to come, he certainly won’t let anyone take it off him without a fight.

That this was his first goal in his 27th Barcelona appearance this season gives a snapshot of the difficulties the Portuguese winger has had settling in.

He is yet to make a league start – his 17 league games have all come from the bench, making him the most-used substitute in La Liga.

In January, there was talk of him moving away on loan to get more minutes under his belt. And on Wednesday in their Copa del Rey quarter-final against Granada – a remarkable game that Barcelona won 5-3 in extra time – Jordi Alba showed frustration with Trincao’s lack of concentration.

But it is little wonder the Portuguese has taken time to bed in given the scorched earth in which he has found himself planted – even the press conference that unveiled him as a Barcelona player was dominated by questions around Messi’s future.

And despite occasional lapses or poor performances, there have been sufficient positive flashes to provide hope that he can reproduce the form he showed in a great Braga team last season.

As Ronald Koeman said in January: “It’s not necessary to go too fast, the player is working well and is trying to get his minutes and games. He’s on the right track, there’s a lot of competition [for places], and we count on him for the future.”

Trincao gives natural attacking width in a team that severely lacked it last season and his ability to take on his man can be captivating at times. As Koeman suggested, perhaps he just needs a little more time to get fully up to speed and unleash the lanky-legged skills and powerful finishing that make his YouTube highlights compilations such a gripping watch.

After his goal, the 21-year-old claimed in true 21st Century professional footballer style that he “didn’t need” it for his confidence and that he was “most of all very happy with the victory”. Yet inside, he must have been bursting with relief at finally getting on the scoresheet.

It was a fine end to a good week on the pitch for the Catalan giants, and their fans will be hoping the goal give Trincao the confidence he needs to push on.