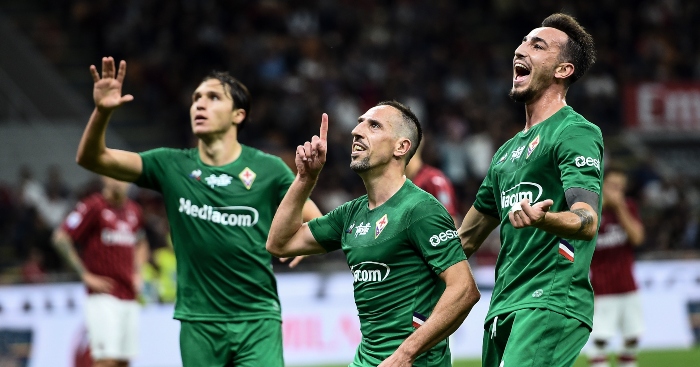 When Franck Ribery left Bayern Munich after 12 years of unprecedented success this summer, most people expected one of European football’s greats to wave goodbye as he sailed off into the distance for one final payday.

In an in-depth interview with German publication DW, Ribery was linked with a trio of Middle Eastern clubs; Qatari duo Al-Saad and Al Duhail, and Saudi Arabia’s Al Nasr. The winger had just turned 36, had won all there is to win in European football and had nothing left to prove.

It would have been hard to begrudge him following Xavi’s lead and cashing on his status earned thanks to over a decade of brilliance.

But Ribery’s departure from Bayern was never that calculated. He only accepted it was time to move on from Bavaria at the start of May, and he admitted he was a little lost, telling DW: “I don’t know. I don’t know what… I’ll keep going, of course, I still want to play football. But I don’t know where. I don’t really have a plan yet.”

La Viola had put their faith in youth in 2018-19, showing promise in reaching the semi-finals of the Coppa Italia, albeit struggling in Serie A and only avoiding relegation by three points.

Italian American billionaire Rocco Commisso took over the club in the summer promising to build a side capable of competing with Juventus. Signing a player closer to his 40th birthday than 30th, who had never played in Serie A, on a salary twice that of prized asset Federico Chiesa, seemed a strange way of trying to topple the Old Lady.

Yet just 329 minutes into Ribery’s Serie A career, nobody is questioning the wisdom of the move.

On his first start for the club, the former France international helped Fiorentina hold Juventus to a creditable 0-0 draw before opening his account for the club in a 2-2 draw at Atalanta the following week.

Fiorentina had led 2-0 heading into the final 10 minutes in that clash with Atalanta, but a 94th-minute equaliser continued their run without a league win since February – their last three points at home came in December 2018.

Those unwanted records were consigned to the history books against Sampdoria in midweek, however, and Ribery was again at the heart of things, providing the assist for German Pezzella’s opener in a 2-1 victory at the Stadio Artemio Franchi.

Fiorentina carried that momentum into their trip to Milan this weekend, in which manager Vincenzo Montella returned to his former club. And even despite his good form, Ribery confounded expectations with a masterclass display to lead his side to a 3-1 victory.

The tone was set early on as Ribery ghosted past two defenders to force a save from Gianluigi Donnarumma, with Fiorentina awarded a penalty in the aftermath that was converted by Erick Pulgar.

And it was the veteran’s dancing feet which led to the gamebreaking moment, flicking the ball past the on-rushing Mateo Musacchio, who resorted to a rash kick out on his tormentor’s shins and was given a straight red card.

From then on, Montella’s side could enjoy themselves in one of the continent’s greatest arenas, doubling their lead 10 minutes later through Gaetano Castrovilli before Ribery added the icing on the cake.

The beauty of Ribery’s goal came not through individual brilliance but rather the slick and confident ball-playing of the entire side. This was a team which prior to last week hadn’t won a game for 220 days, suddenly toying with one of the biggest teams in Italy in their own backyard.

The finish, of course, was reminiscent of the magic Bayern could rely on from either flank in the halcyon days of Ribery and Arjen Robben on either flank.

To their credit, Milan’s supporters gave the old maestro a standing ovation when he was substituted with a minute remaining, and afterwards Ribery cast a very different figure to the uncertain soul looking for a new home in the summer.

“Yes, I am old, but I feel young on the pitch!” Ribery told Sky Sports Italia afterwards. “Football is my life, I love it. I was hungry when I came to Fiorentina and it excites me to see the team doing so well.

“I came to help Fiorentina, the players and the fans. I am happy, but I need to work every day, every week to play the way I did tonight.”

Ribery is unlikely to learn any new tricks at this stage of his career, but if he can continue passing on his wisdom to Fiorentina’s young pups, La Viola can look forward to plenty of life in the old dog.