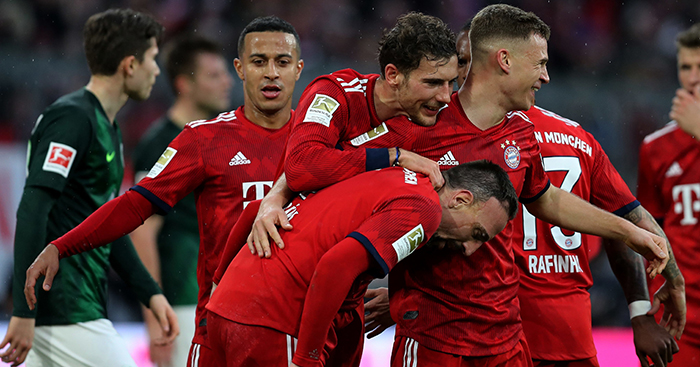 When the time comes for FIFA to introduce new rules to the game of football, there’s a case for banning Bayern Munich from introducing second-half substitutes at home to Wolfsburg.

Less than four years on from Robert Lewandowski’s five-goal haul from the bench, Franck Ribéry decided to get in on the act at the weekend, entering the field of play with 55 minutes on the clock and proceeding to produce three assists in Bayern’s 6-0 victory.

The French winger seems likely to leave Bavaria at the end of the season, 12 years after arriving from Marseille, and the legacy he is set to leave will be up there with pretty much any foreign import to spend time at the club.

That’s something few would have predicted during Ribéry’s early career. You’d have been brave to predict a decade at any club for him, let alone one of the best in the world.

By the time he joined Marseille in 2005, he was joining his sixth club at the age of just 22, including spells in the French third tier and in Turkey with Galatasaray.

After showing few signs of greatness elsewhere, something seemed to click once Ribéry moved to Stade Vélodrome.

Some players can shrink when tasked with impressing bigger crowds at teams with prouder histories, but for Ribéry – fresh from a Turkish Cup title – the opposite was true.

The opportunity to become a hero to some of the most enthusiastic fans in the country seemed to spur him on and, even if he only ended up staying there for two seasons, the quality he produced had already begun to hint at an ability to perform on a much higher plane.

One of his first, and best, Marseille goals came against Nantes, barely a dozen games into his career at the club. The strike itself was stunning, a long-range belter good enough to win any game, but it’s also worth noting the intent with which he got into a central pocket and demanded the ball, as if confident in his ability to make himself the talisman of a team in need of exactly that.

If ever a goal was the physical manifestation of a pumped-up player pounding his chest in celebration like Matthew McConaughey in The Wolf of Wall Street, it’s this one.

Ribéry has always had that capability of connecting with the ball as if it had wronged a member of his family, as he showed with a goal against VfB Stuttgart in his first Bayern season.

If the threat of team-mate Arjen Robben is defined by his ability to let you know exactly what to expect but still leave you helpless, Ribéry has often had the knack of delivering on an opening before you’d even noticed it was there.

When Ribéry came off the bench against Stuttgart in 2008, the teams were in a tight one-goal game.

When he stepped off it at the end, having beaten Raphael Schäfer once with each foot, there will have been some left wondering whether it would have been easier just to give him 30 minutes at the start and wrap things up nice and quickly rather than adding that unnecessary element of risk.

The Ribéry of those first few years at Bayern was as good a player as pretty much any club could boast at the time, regularly racking up goals in the Bundesliga and in Europe while Robben was still clinging to the last of his hair in Madrid.

More recently, though, age and injuries have forced Ribéry – and Robben for that matter – into a more peripheral role.

There are plenty of worse supporting artists to have, though, and introducing the Frenchman alongside the likes of James Rodríguez and Robert Lewandowski can feel like adding a classically trained Olivier Award winner to the cast of a Hollywood blockbuster: it’s a different kind of brilliance, developed for a different football landscape, but one which can bring the best out of those who have never needed to develop such a skillset.

For all of their hard running and energy – indeed, perhaps because of it – the kind of pinpoint accuracy Ribéry produced to set up Thomas Müller and Joshua Kimmich on Saturday will always be gratefully received.

It’s a classic example of a player working extremely hard to make the difficult look easy, giving the two Germany internationals simple tasks through an ability to just decide “we’re scoring now” and take matters into his own hands with the confidence of a man who knows those who think they’re poised to stop him are little more than decorations.

Even the final goal, a deft header from Lewandowski, is made easier by Ribéry waving an invitation in the direction of his team-mate like a jar of jam in front of a wasp.

It shouldn’t be so easy to make a Bundesliga match look like a training exercise, even at 5-0 up, but Ribéry has been playing this game long enough to be set for any and every situation.

There are some things you don’t forget as a footballer, and for Franck Ribéry that’s one of them.

Even if he leaves Bayern this summer, and even after he retires and the years go by, you feel he’ll always have it in him to produce the goods.