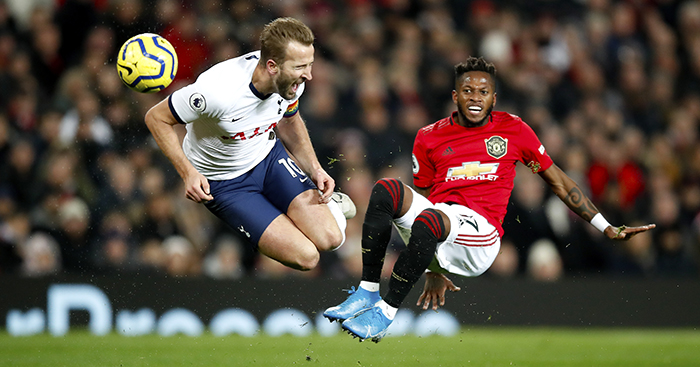 After his brilliant performance against Tottenham, Manchester United’s Fred is — whisper it — looking almost like a £52million midfielder.

That’s partly because it’s been less of a ‘point’ and more a vast, sad expanse of unfathomable depth. Sort of like the Dead Sea but filled with shit passes instead of salt.

The Brazilian has been called one of the worst signings in United’s history, and journalists recently reported that Jose Mourinho never really wanted him, only signing off on his transfer because Ed Woodward came up with literally no alternatives.

Few players have attracted as much furious criticism in recent times.

And that criticism has been largely justified: Fred has, with the exception of a handful of matches, been bad.

Players like Andreas Pereira have often been bad too, but the younger Brazilian has the handy get-out-of-jail-free card of not costing £52million. For Fred, the mountain of expectation has seemed too steep, right from day one.

So all of that makes the midfielder’s brilliant performance against Tottenham something of a redemption story.

But still time here for a Fred Red redemption*

Over the course of 90 minutes at Old Trafford, Fred made the right passes — difficult ones, too — and managed to win the ball in key areas at key moments.

He also had a shot which was so bad that Marcus Rashford was able to retrieve it before it went out for a throw-in, but hey, nobody’s perfect. Had Rashford not scored both of United’s goals, the Brazilian would surely have been named Man of the Match,

One peak above a sea of mediocrity won’t change Fred’s reputation just yet, but if this performance is any indication of what he can do, it looks like United may have found the player they thought they had bought 18 months ago.

But now let’s return to how rubbish he’s been up to now.

Yes, bad Fred performances have come at regular intervals since the midfielder joined the club in June 2018.

So regularly, in fact, that his only real standout performance in a United shirt was the improbable Champions League win over PSG, which doesn’t really count because

And Fred’s struggles haven’t exactly lessened over time. Maybe his worst string of performances came this October, when the former Shakhtar man engineered an impossibly depressing 0-0 draw against AZ Alkmaar before somehow being even worse in the 1-0 defeat to Newcastle.

After the Alkmaar game, an unimpressed Michael Owen said of Fred: “He’s just a moderate player isn’t he? That’s the bottom line.”

Martin Keown added after the Newcastle humbling that Fred’s discomfort in possession was “almost becoming a joke”.

Both games were notable for the midfielder finding creative ways to put the ball out of play: first with a confusing pass to nobody against the Dutch minnows, then with an amateurish first touch on Tyneside that had Pereira, of all people, gasping in frustration with his team-mate.

Fred wasn’t quite so bad in the 1-1 draw with Liverpool that followed, but he still managed to piss off Roy Keane by cuddling Roberto Firmino and Fabinho in the tunnel.

Not so long ago, it looked like Fred’s second season could be even worse than his first.

After The Athletic reported in October that Mourinho had agreed to sign Fred purely through fear of getting no midfielder at all, United quickly denied the claims.

Let’s choose to believe the paywalled media outlet, though, because that weird backstory to Fred’s transfer makes his glorious renaissance this week even more special.

With Mourinho back in a different section of the Old Trafford dugout, there were opportunities for current United players to show their old boss what they could do.

And although a Luke Shaw hat-trick would have been ideal, Fred’s dominant display was just about the best possible outcome for those who consider the Red Devils a lesser evil than Jose. (A flying Daniel James almost knocking over the Portuguese was, in that regard, also pretty good.)

Fred for Man Utd vs. Spurs:

The display Old Trafford has been waiting for. 👏 pic.twitter.com/7F7b6NiBrX

The Brazilian was simply everywhere against Tottenham.

Moussa Sissoko and Harry Winks, on paper the stronger midfield partnership, found themselves half a second behind Fred and the similarly excellent Scott McTominay, as time and again United’s No.17 escaped white shirts to poke the ball to an attacking team-mate.

That neither Winks nor Sissoko lasted the 90 minutes is testament to how well their opponents controlled the game.

Of course, the Fred-McTominay axis is no United fan’s dream midfield, and that duo may well come unstuck against opposition playing better than Tottenham.

For now, however, the Brazilian has shown that he can be excellent, that the absence of Paul Pogba might not prove fatal to United’s season, and that Fred is, just about, a red.