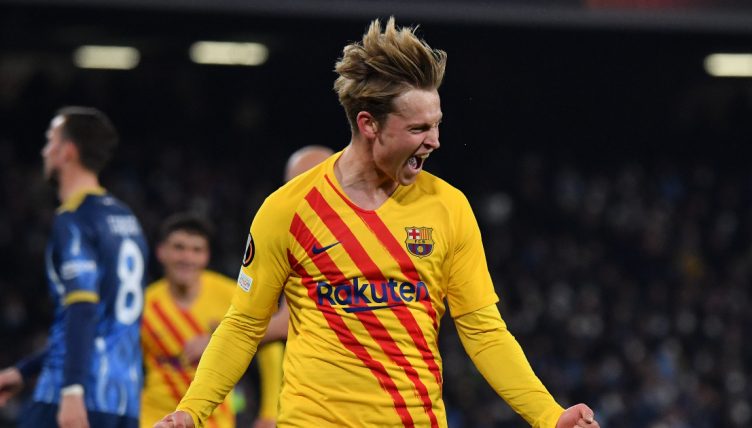 Barcelona have been finding their feet again under the management of Xavi Hernandez, and this came to a peak in their stunning 4-2 Europa League victory at Napoli on Thursday night.

January signings Ferran Torres, Adama Traore and Pierre Emerick-Aubameyang have all hit the ground running, but one of Xavi’s biggest impacts has been on someone who plays in his position.

Xavi was one of the greatest midfielders to ever kick a ball, and when the Barcelona legend returned as manager, there was hope that he would bring back the style which he, Iniesta, Messi and a host of world-class talent made famous for years.

With some impressive wins and a fresh load of La Masia products in the team, it has been a positive start to Xavi’s tenure as head coach, and the players seem to be enjoying his methods.

When Frenkie De Jong arrived at Barcelona after a stunning campaign at Ajax, there was a lot of justified hype.

This was a young midfielder who had just reached a Champions League semi-final whilst playing spectacular football, and as the old saying goes, he possessed ‘Barcelona DNA’.

However, he took some time to settle, and after two years there were serious question marks about De Jong’s long term future at the club.

He found himself on the bench watching the likes of Pedri, Gavi and Nico Gonzalez, all players younger than him, run the show whilst he struggled for consistency. It was looking very bleak.

But then, a hand of redemption reached out to him. It was the hand of Xavi.

No one knows how to be a Barcelona central midfielder better than Xavi, and he’s proved to be the perfect mentor for the 24-year-old, who’s been reborn at the club.

And it was in the Stadio Diego Armando Maradona that De Jong showed exactly how good he is now, with one of the strikes of the season.

Barcelona were rampant and Napoli had no answer when De Jong picked the ball up in the middle of the park and drove forward, before executing a finish that Xavi himself would have been proud of.

Could not have placed it better! A beautiful goal away to Napoli…

Planting one into the top corner is probably the most satisfying way of scoring, and the Dutchman did exactly that.

The goal summed up what kind of player he is.

It wasn’t an Adriano-esque piledriver to rip the net off; it was struck like he was playing a lofted pass, and placed the ball exactly where he wanted it.

A proper postage-stamp finish, it embodied the elegance with which he guides the ball when dictating the play in the middle of the park and showed just how insanely gifted the midfielder is.

Xavi was full of praise for his protege after the Napoli game, where De Jong was also awarded the man of the match for his display.

De Jong completed more passes and created more chances than anyone else, and everything ran through him. It was a performance that will be highlighted for a long time as one where he stepped up and guided his team through to the next round.

“Frenkie de Jong played an amazing game. He is great. Frenkie is a genius,” Xavi said.

“I’ve come across few players as self-critical as Frenkie de Jong, he’s very demanding and that makes him better.”

“At first he didn’t understand what we were asking him to do, but he’s getting better and better and he’s showing a big improvement.”

“Frenkie is grasping a lot of tactical concepts that he did not understand before. He’s learning how the be the free man in the midfield. But he has a lot of qualities, like scoring goals too. He has everything.”

His words highlight the difference between the De Jong seen under Ronald Koeman and his stunning performances now and show the ability of both player and manager to develop so quickly.

Barcelona are on their way back up, and De Jong will be a fixture in their midfield for years to come.

Best yet under Xavi? Seven amazing stats from Barcelona’s win vs Napoli