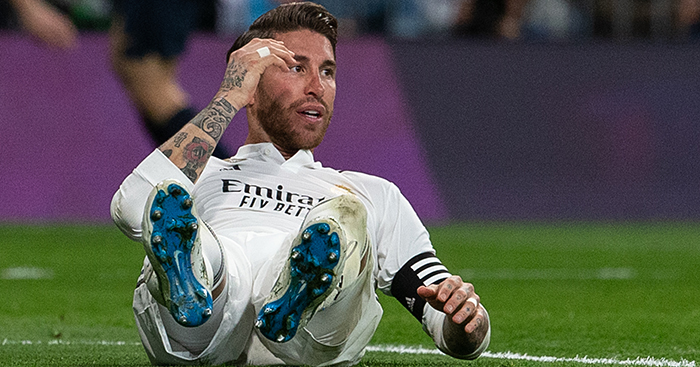 In a week of remarkable European football, seeing Sergio Ramos and Neymar squirming in the stands will for many people have been the highlight.

Football needs its pantomime villains. While fans should do everything in their power to drive out the genuine bad guys — greedy owners, price-gouging broadcasters and corrupt FIFA officials — ‘villainous’ players are an important part of the beautiful game.

Without the likes of Ramos, the king shithouse to whom we gave a loving tribute last year, football would be a mundane affair, a bloodless sequence of kicks and handshakes culminating in meaningless finals in which you don’t really mind who wins. Boring!

Villains give narrative to the sport. They make your team the protagonists and your rivals the antagonists waiting to spoil the party. They add an extra layer of emotion to the footballing experience. And however much you want to complain about them, things would be much worse without them.

But this was a particularly strange week for pantomime villains. Two of the game’s most iconic villains suffered over-the-top humiliations in the space of 24 hours. Good triumphed over evil, but to a frankly unrealistic degree.

If this was poetic justice then the poetry was basically overwritten, like a latter-day Quentin Tarantino film in which the director tries to show his moral fibre by killing the antagonist in the most violent way possible.

In a sort of Inglourious Basterds version of the Champions League, the flaying of Sergio Ramos and Neymar was bordering on contempt for the audience. It was too satisfying.

Because as Ramos sat in his private box being filmed for an Amazon documentary about himself, most neutral fans would have been happy with Ajax simply giving Real Madrid a good run for their money. With them grabbing a plucky goal before being knocked out with their heads held high.

We wanted to see Ramos squirm, for him to feel like his deliberate yellow card was actually a pretty stupid thing to do after all. Nobody expected Ajax to turn that documentary into a slasher flick.

But that’s exactly what happened. As the Dutch side — their entire wage bill less than Gareth Bale’s salary — ran riot over Madrid, football had the rare opportunity to see one of its pantomime villains hilariously vanquished. And this just a few days after he’d been punched in the head.

What’s strange is that, this week, we got to experience that emotion twice over.

Just a day after Ajax knocked out Madrid, shots of Neymar’s dangly earrings bouncing up and down, the Brazilian’s head moving side to side in cartoon-like confusion, felt borderline pornographic. Football was spoon-feeding justice to us.

Now, in his defence, Neymar is a pantomime villain mostly because he’s really good. And, in extra fairness, he missed the match after Strasbourg players kicked him to bits, not after deliberately earning himself a yellow card.

But though we might not fully understand the hate ourselves, there’s no doubting the PSG forward is a pantomime villain. And, just like Ramos, he got his comeuppance in style. His ‘Go f*** yourselves’ rant was the icing on the cake.

The unprecedented double-humbling of Ramos and Neymar should be enjoyed with caution.

Because while it can be deeply satisfying to see, let’s say, José Mourinho falling over on an ice rink for some reason, or José Mourinho tripping over a bit of red rope, there is a limit to the amount of poetic justice we can handle.

As contradictory as it seems, we need our villains to succeed in their villainy most of the time.

Neymar haters will claim the Brazilian is a diver, but they wouldn’t care so much if he didn’t supplement those dives with ludicrously impressive goals against their team.

A villain who falls on his arse too many times is simply not a good villain unless you’re actually watching pantomime — and most football fans demand a greater degree of jeopardy than that. A villain needs to succeed most of the time, or victories for the hero become hollow.

So while we should bask in the warm glow of the Neymar-Ramos implosion for a few more days, we should also hope that this season throws up a few more victories for the bad guys.