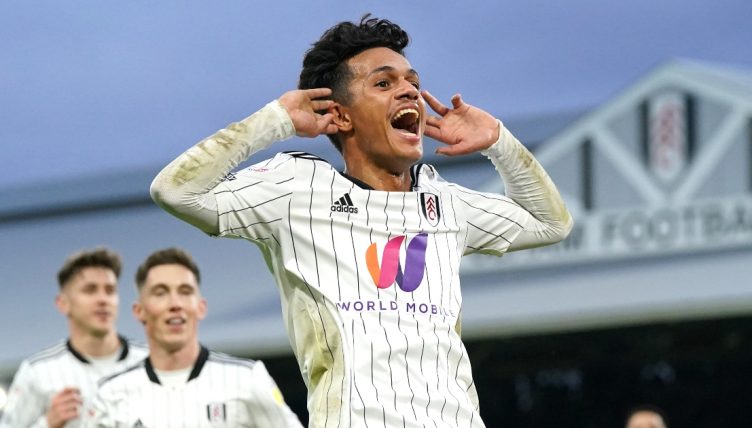 There is rarely anything more thrilling in football than watching a player dribble at his opponents.

While the modern game is based on possession, clever movement and dictating the play, players that directly run at defenders have felt like a dying breed.

But there’s something primal about watching a skilled attacker carry the ball forward, while the eyes of the targeted defender shrink to microscopic size, before a battle of wit commences between them.

It almost brings to mind a pair of medieval knights donning their armour, climbing aboard their valiant steed, and charging towards each other with jousts drawn.

All of which, in a roundabout way, brings us to Fabio Carvalho, reportedly bound for Liverpool.

Carvalho has shone as Fulham push for an instant return to the Premier League, scoring seven times and registering four assists for Marco Silva’s free-scoring side.

It could be suggested that Fulham are simply a cut above your standard Championship fare, the footballing equivalent of Gordon Ramsay serving kebabs at your local takeaway.

But Carvalho has only played 23 senior matches of football. Whatever the level of opponent, his talent is evident for anybody with a working pair of retinas.

“Fabio has natural talent, and when you have natural talent, that is the first big step to have a big career and to get to the top,” said his coach, Marco Silva, earlier this month.

“Fabio has other things that are really important. He comes in every day to work really hard, with the right mindset to learn, and he’s humble.”

He also possesses the elusive nature of an eel wearing an invisibility cloak if his goal against Barnsley back in November is anything to go by.

Fulham were leading 1-0 when Carvalho accepted possession on the left flank and left two leaden-footed defenders choking on dust.

Passing to Aleksandar Mitrovic as a decoy, the 19-year-old slipped through three defenders like a PoW escaping the clutches of armed guards before curling a delightful strike beyond Brad Collins in the Barnsley goal.

It demonstrated all the best aspects of Carvalho’s game; the fearlessness in possession, the ingenuity of his movement and the strike that was cooler than a Solero in a heatwave.

Carvalho is the latest in a long line of exciting academy talents to break through the ranks at Fulham, including Ryan Sessegnon, Moussa Dembele and Harvey Elliott — who was, for a brief time, in the same age group.

Born in Portugal, Carvalho moved to London at an early age and was scouted from local club Balham in 2014 – amid interest from Arsenal, Chelsea and Manchester United.

The forward scored on his Premier League debut at Southampton last season and has kicked on spectacularly under Silva this term.

During the recent 6-2 hammering of Bristol City, Carvalho demonstrated his enviable confidence with a mazy dribble through half of Nigel Pearson’s side.

After showing Alex Scott a clean set of heels, Carvalho drove relentlessly into the open space City had carelessly left for him.

Even the referee had to take a backward step to prevent being swept off his feet by the youngster’s speed and trickery. Only the most professional of fouls by a smarting Scott prevented his opponent from travelling any further.

The signing of Carvalho – should they get it over the line – ticks a lot of boxes for Jurgen Klopp and Liverpool.

They’ve scouted Carvalho extensively and their reports have been described as “glowing”. He would fit the bill at Anfield in terms of his age, profile and the fact he qualifies as homegrown.

While the club intends to loan the player back to Fulham for the rest of the 2021-22 season, Liverpool fans will be excited for a dynamic and forward-thinking attacker to link-up with their squad over the summer.

And, judging by his Championship form, Carvalho is the type of player that will quicken the pulses of the Anfield regulars for many years to come.