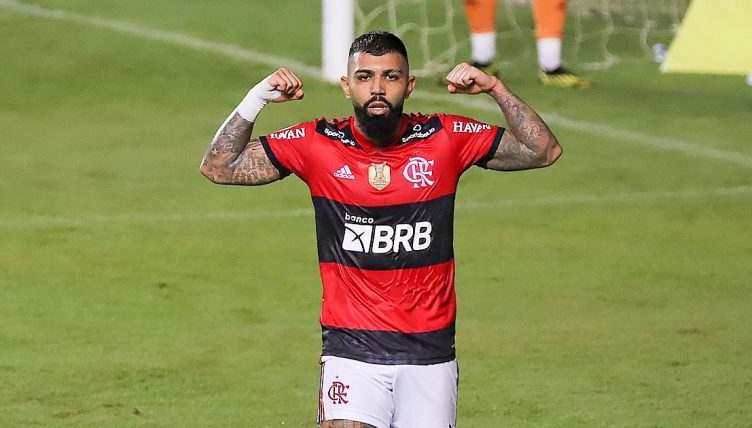 Arthur Antunes Coimbra, Edson Arantes do Nascimento, Marcos Evangelista de Morais, Ricardo Izecson Santos Leite. Heard of them? Anyone? They were all quite good at football.

What if I asked about of Zico, Pele, Cafu and Kaka? Of course you’ve now guessed they’re the same four people. See, we said they were quite good at football.

The point? Well, the nickname. It is a beautiful thing, magnificent in its evocative simplicity. And it’s one of Brazilian football‘s great traditions.

Yet it is a dying tradition. Increasingly, players are advised by marketing departments and agents to abandon childhood monikers in favour of some version of their actual name. Sad if you ask us, but apparently it works better on shirts and merchandise.

Despite that move away from nicknames, when one sticks it can still be hard to get rid of. Just ask Flamengo striker Gabriel Barbosa. His – Gabigol – is not as unkind as some sobriquets. But try as he might, he still can’t shift it.

As far back as 2013, he boldly declared: “Gabigol was a joke people made, but I prefer Gabriel. It’s my name.” Over the next two and a half seasons he scored 54 goals and well, you can guess what people kept calling him.

Fast forward to 2021, past his failed spell in Italy – where he was briefly ‘Gabi-no-gol’ – and his career resurrection first at Santos then Flamengo – where he’s re-earned ‘Gabigol’ – and he was at it again. Come the start of the season, he’d changed the name on his shirt. Now, ‘Gabi’.

Flamengo’s social media and official site took up the new, shortened name, and one of his mates told O Globo: “It’s Gabi, with the emphasis on the ‘a’, not the ‘i’.” Still though, no success. Look at any Flamengo match report in a Brazilian newspaper and it’s ‘Gabigol’ who scored.

The next ploy? Well, it seems that if he can’t convince people to change what they call him using his mouth, then Gabriel Barbosa will have to do so using his feet.

And on Wednesday night in the Paraguayan capital Asuncion, he got to work. He scored twice, it’s true; his 21st and 22nd goals in 23 games this season, that ‘gol’ suffix in evidence again.

But in Flamengo’s 4-1 Copa Libertadores quarter-final first-leg win over Olimpia, it was Gabi’s creative work that was most impressive: a pass for a goal to make it four and the pass before the pass for Flamengo’s first (yes, stats nerds, a pre-assist; but it sounds ugly doesn’t it?) that was even better.

Olimpia, though not the best of the eight teams left in the competition, is a tricky tie away from home. Fifteen minutes in, Gabi and his mates made it look anything but.

Flamengo’s No.9 was played the ball just inside the Olimpia half. Whereas once he might have crumpled under the challenge that came from behind, this time he rode it, swivelled and played in the supersonic Bruno Henrique, who set up Giorgian De Arrascaeta for the opening goal.

It was proper centre-forward play, back-to-goal, bringing his colleagues into the game, buying them time to run beyond.

To round things off 75 minutes of playing time later, Gabi was brilliantly selfless once more, laying the ball off to team-mate Vitinho to complete a 4-1 rout that put Flamengo firmly in control of the tie when he could easily have taken on the shot himself. To make it more impressive, Gabi was on a hat-trick at the time.

Between the 15th and the 90th minutes, he had scored twice, a penalty and a full-on poachers effort. Yet here he was, still happy to lay the ball on a plate for a mate, to put the collective ahead of himself.

He has certainly been in terrific form for Flamengo since his return from the Copa America, which Brazilian fans and pundits have put down to the arrival of new manager Renato Gaucho.

Renato was a fine all-round attacker himself during his heyday in the ’80s and ’90s – “better than Cristiano Ronaldo” if you believe Renato himself.

Perhaps some of that wisdom – particularly on how to create – is being imparted. Since Renato’s arrival, Gabi has seven goals in eight games but importantly three assists too.

Renato also has a reputation as a great motivator and appears to have taken the annoying uncle approach to geeing up Gabi, calling him names and telling him very publicly: “I’ve got a trophy for every year you’ve been alive,” a line which predictably made waves in the press.

But Gabi has plenty of motivation from within, or at least he should have.

Firstly, he needs to keep up his form with Flamengo to get back into the Selecao squad for the upcoming World Cup qualifiers. Though he may have been included for the Copa America, he did not excel at the tournament, so will rely on club performances to guarantee himself another call-up.

Second, he has spoken of wanting a move to Europe. In a recent interview with the Sun, he said: “It is every player’s dream to go to Europe. They have the best leagues in world football.”

He also said that he now realises talent alone was not enough for him to succeed at Inter Milan, adding: “I can still evolve even more in the coming years, becoming an even more efficient striker.”

Perhaps then, he has taken criticisms on board – that he was too one-footed, too one-dimensional, too individualistic – and started to work on them, started to diversify his skill set. Perhaps there can be more to his game than Gabi’s goals and less to his name that Gabigol – just Gabi will do fine, thanks.

If his quest is to demonstrate another dimension to his abilities, Wednesday night’s performance was not a bad place to start.

Hulk: Dominating in Brazil & looking to smash River Plate in the Libertadores