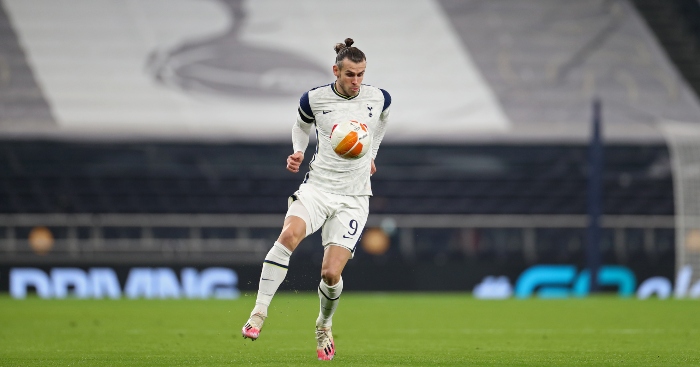 So far, Gareth Bale hasn’t been as prominent as some may have hoped since returning to Tottenham on loan from Real Madrid.

This is best summarised by Jose Mourinho leaving Bale on the bench in consecutive Premier League matches against Manchester City, Chelsea and Arsenal.

Still, there have certainly been moments in which the Welshman has shown he can still be an asset – notably his winner after coming off the bench against Brighton & Hove Albion.

With Mourinho’s side needing a win against Royal Antwerp to usurp the Belgian side and go top of their Europa League group, Bale is the man who stepped up to get things started, even if the goal wasn’t to be his.

The 31-year-old had absolutely no right even testing the goalkeeper from how far out his free-kick was, but he produced such superb technique and power that it was mightily impressive that Alireza Beiranvand managed to tip it onto the bar.

While Carlos Vinicius is the one with a goal to his name, the best thing about the goal is undoubtedly Bale rolling back the years and showing his quality can be enough to make the mind boggle.

Looking back at Bale’s first spell at Spurs, it seemed like an almost weekly basis that the Wales international was pulling off something that was absolutely unreal.

There were the hat-tricks against Inter and West Ham, as well as the incredible volley against Stoke City and far too many great individual goals to even try mentioning.

The forward may have been ostracised at Real Madrid, but he provided them with amazing moments of brilliance too.

Who could forget when the Welshman ran off the pitch to get past Marc Bartra to score against Barcelona in the Copa del Rey final, or the amazing overhead kick that sunk Liverpool in the Champions League final?

Bale may not be getting regular game time at the moment, but the way he struck that free-kick shows the quality to delight Spurs fans is undoubtedly still there.

The Spanish press famously criticised him for dedicating too much of his focus to golf. On this evidence, he’s spent just as long honing his skills with a dead ball. It’s kind of the same thing, really, when you think about it.

It even felt like he was rolling back the years to a time where Premier League defences feared nothing more than Bale’s left foot.

The magical moments may not be as regular now, but that doesn’t mean they are any less brilliant.