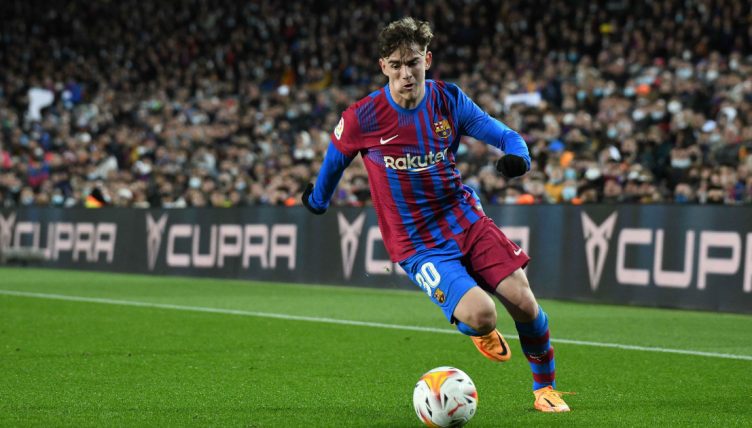 When most footballers step out onto the pitch, they have at least some modicum of respect for the opposition players, their careers and their livelihoods.

However, a Roy Keane or a Raul Garcia occasionally comes along with leg-breaking challenges and non-stop sh*thousery, attacking their opponents with the same gusto that a lion might use to attack a gazelle, but crunching tackles aren’t the only way to commit murder.

For years, Lionel Messi would kill the promising careers of most defenders he faced, dribbling past them with such speed and skill that they would trip over their own feet, falling to the ground humiliated.

In Barcelona’s first post-Messi campaign, it is the youngsters who have stepped up to fill the void of departed legends.

Pedri and Frenkie De Jong are replicating the extreme technical superiority Xavi and Andres Iniesta brought to the Camp Nou, whilst a 17-year-old wearing the No.30 shirt is giving the Blaugrana faithful a strong sense of deja-vu.

In Barcelona’s 3-2 comeback win away at Levante, it was young midfielder Gavi who took it upon himself to inspire the team to victory, whilst ending the careers of a few defenders on the way.

In the second half, with the team trailing, Gavi appeared as a substitute, and Levante didn’t know what hit them. Receiving the ball in the middle of the park, within minutes of his introduction Gavi knocked the ball past Pepelu with a touch so sublime that the Levante midfielder collapsed to the ground, desperate for the game to end.

It was a touch that truly showed Gavi’s speed of thought and majestic technique, and he did it against a team with players double his age.

The moment of true inspiration came later in the half. With the scores level after Pierre-Emerick Aubameyang’s equaliser, a frantic Barcelona attack saw the ball come out to Gavi on the right-wing. What happened next was extraordinary.

With just four touches, Gavi eased past two onrushing defenders, turning them inside out, before firing in a perfect cross for Pedri to finish. The Barcelona fans at the Estadio Ciutat De Valencia were ecstatic, and Xavi’s side had drawn level in a game they were struggling in.

The speed and utter confidence with which Gavi took on Son at left-back channelled his inner Messi with such ferocity that anyone could believe it was 2007 again.

Gavi wasn’t even born when Messi made his Barcelona debut. The legendary Argentinian wore the same squad number he currently occupies, and like Messi did before, he’s showing off a remarkable ability well beyond his years.

Already a regular starter, and a full Spain international, Gavi has the potential to reach the very top, and beyond simply having talent, these dribbles show he has the tough mentality needed to become a lethal force in midfield.

His manager Xavi, who knows exactly what it takes to become a success at Barcelona, was full of praise for his young prodigy in February.

“At just 17 years old his performance is spectacular. It’s wonderful to train him.”

With two goals and six assists in 39 appearances, it has been a fantastic breakthrough campaign for Gavi, and he’s getting better and better with each passing game.

La Liga defenders: brace yourselves. Gavi is coming to take your life and there’s nothing you can do to stop him.