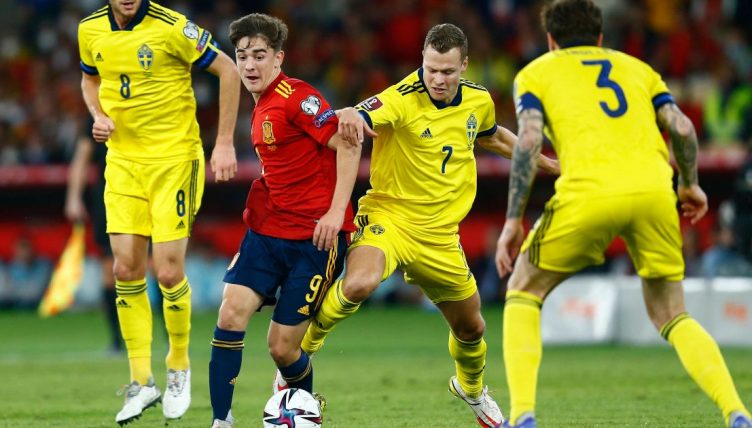 With every rung a player climbs on the steep, slippery footballing ladder, there is a period of adaptation.

Whether it’s from the Under-18s to the Under-23s, or the Under-23s to the professionals, or second division to first, or Europa to Champions League, new challenges are presented which take time to overcome – or in some cases prove too much altogether.

Yet Barcelona’s Gavi seems not to be climbing the ladder at all. While the rest toil to drag themselves upwards, it appears he is flying past them, like a man who’s had a rocket strapped to either ankle and been propelled straight to the top.

As recently as August, few outside the hardcore Barca fanbase would have known Gavi’s name.

On Sunday – back in his hometown of Seville, in front of his extended family – he dominated the midfield in a vital World Cup qualifier for Spain.

And, with his silken touch and divine dribbling skills, he gave his near-namesake and new boss Xavi a viewing experience to bring joy to the heart.

Gavi is 17. Against Sweden, in a game that Spain needed to get a result in to confirm their place at Qatar 2022, he was playing for the 18th time as a senior professional.

Yet from the first minute against the obstinate, organised Swedes, it was he who made the running, who took the ball and cherished it, who exerted a level of control beyond most players, never mind beyond his years.

One sublime moment in the first half summed up his elegant influence better than any other.

In the 18th minute, Gavi picked up a loose ball ten yards or so outside his own penalty area.

Immediately, the imposing figure of Dejan Kulusevski was looming over his wiry little frame. Gavi slipped his body between Kulusevski and the ball though, shielding it and sending the big Juventus forward tumbling to the floor. Strength is in the mind as much as in the body.

Then the teenager was faced with the experienced Krasnodar man Viktor Claesson, at which point most midfielders would have passed the ball back to their centre-half.

Instead, Gavi shifted the ball from one lighting quick foot to the other and was away. As he did, he seemed to float in the air, motionless for a split second, hovering like he had found a glitch in the law of universal gravitation.

The counter-attack was suddenly on, Spain were away and Gavi played it smoothly into the path of a team-mate who could continue the charge. Easy.

Speaking to The Coach’s Voice in October, Gavi’s new Barcelona manager Xavi said: “What interests me as a coach? To play as much as possible in the opponents’ half. If they press us high, the most important thing is to break the midfield line, go into the opposition’s half, and attack.”

If you were you were to provide an illustration to go alongside those words, it would look exactly like what Gavi did here to bypass Sweden’s block.

Often it is said of the finest midfielders that no one can get near them. But Gavi repeatedly got the ball in cul de sacs, surrounded by two or three players who were twice his age or twice his size. What makes him a joy to watch isn’t that nobody gets near him, it’s that when they do, he invariably slips away.

When he was called up for his first caps in October – becoming Spain’s youngest ever player in the process – there was something of a furore among fans. Why was a child being selected after and handful of games for Barca when Spain manager Luis Enrique has so many seasoned pros at his disposal?

Why? Well, this was why.

After Gavi won his second cap last month – against France in the Nations League final, no less – Luis Enrique said: “He played like he was in the school playground or in the garden of his house.”

Childish, perhaps. But in the most complimentary sense: free of worry, full of wonder.

And, speaking to Cadena SER after last night’s match, Gavi’s ecstatic father Pablo Paez gave a little insight into why his son is able to play so freely.

“He comes from a humble family,” Paz said. “We’re not footballers, in the sense that none of us has played. The day that he wants to stop playing football, I’ve told him to tell us, but I think it will be a long time because football is his passion.”

You see? No pressure. Don’t fancy it, Gavi? Then just stop. Do whatever else you want. Be yourself. Fortunately for Spain, this is him being himself.

La Roja had to wait and wait for it on Sunday, but eventually, they found a way through, Alvaro Morata finally converting one of his chances with five minutes on the clock.

Four minutes later, Gavi was withdrawn having made 68 of his 74 passes (two of them key passes), having completed five dribbles, won 10 of 15 ground duels and made one thumping tackle.

There will certainly be down days to come. Injuries and losses of form are an inevitability in football. But it probably doesn’t feel much like it for Gavi at the moment – and we should enjoy watching this unfathomably quick, effortless ascent while it lasts.

“It’s been a day to remember,” Pablo Paez added. “At La Cartuja [stadium], the people singing his name, Spain have won… this you don’t forget.”