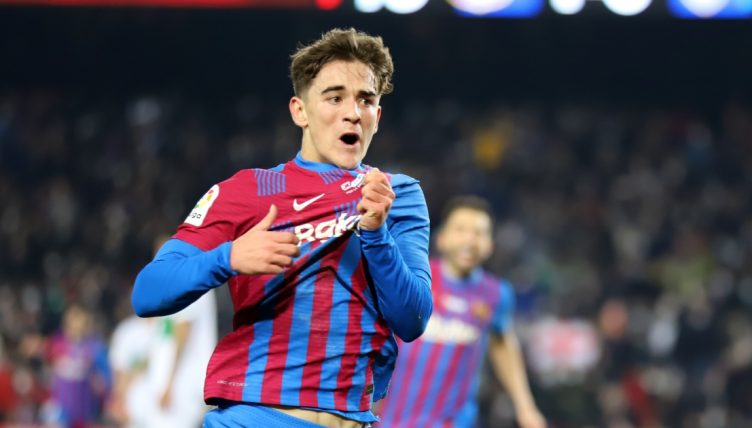 It came in the 18th minute, like the long-anticipated first flash of lightning in a storm. Gavi, just 17-years-old, channelled the subtle flair of Barcelona legends past to mystify both the Elche defence and the awe-inspired Camp Nou crowd.

Barcelona were pushing for a second goal against Elche with a dominance of the ball not seen in months in the Catalan city.

Taking the ball deftly with his left foot and with his back to the Elche defender, Gavi knocked the ball past his white-shirted assailant and was off.

No one was stopping him now.

Truthfully Gavi, whose actual name is Pablo Gavira, was aided hugely by the Elche defence, which was totally disorganised and left a gap which urged the young La Masia graduate to drive into it.

But still, the young man had to have the confidence and the gusto to do so.

He had passed one Elche defender already, now another turned to face him but with one touch Gavi skipped past him, the defender almost prostrating in respect to Catalonia’s new king as he passed.

Next in line was the goalkeeper but in stride, Gavi fired the ball low, hard and accurately to render it a non-issue.

Off the post and in it went, as perfect a goal as you could hope to score. Forget the quality of defending and instead focus on the brilliance of a 17-year-old called upon by his club at its ultimate time of need.

With his low centre of gravity, full-speed run and accurate finish you could have mistaken him for a young Lionel Messi bamboozling La Liga defences.

Alas, when you rubbed your eyes at half-time you would have seen the imperfect picture clearly once more.

What a way to score your first La Liga goal for Barcelona! pic.twitter.com/xFuYNsHq5F

If a side was two goals up at half-time, you would be pretty confident saying that they were going to run out comfortable winners.

But not this Barcelona side. In a topsy-turvy game they gave up a two-goal lead in just two minutes to let Elche draw level and trigger yet more panic about the state of the Catalan giants, both bankrupt financially and bankrupt of ideas on the pitch.

Yet they found a way to win with 19-year-old Nico Gonzalez striking in the 85th minute to bring reprieve to Xavi’s youngsters and the first win of December, 18 days into the month.

He was one of several young players on the pitch; the aforementioned Gavi, Ronald Araujo, Eric Garcia, Jutgla and Abde Ezzalzouli all started and were all 22 or younger.

That is evidence of the fact that Xavi’s short time so far at Barcelona has been loyal to the idea of youth no matter what.

For years Barcelona had tried to chase the Champions League by spending big money on stars yet it led to nothing but financial ruin.

The Barca tribute act to the Galacticos failed, a policy which demonstrated the club had lost sight of the fact that it’s past success came from developing its own players first and buying those that suited their team rather than always going after the big names themselves.

Recent talk of how the club could manipulate their finances to sign Erling Haaland and Matthijs de Ligt, perhaps getting rid of Frenkie de Jong in the process, is a testament to the fact those tendencies remain.

But currently, Xavi must rely on youth and that must be welcomed by Barcelona fans.

It has brought with it magical moments like Gavi’s goal and his emergence as a star. It will lay the foundations for future success as in the coming seasons Barcelona’s youngsters will have had almost a whole season of senior footballing experience.

But it also means that this season, and perhaps the next, will be a roller coaster of lofty highs and painful lows. Barcelona must have the strength to fight through those moments without relapsing to their old ways.

If they can, the future could be bright.