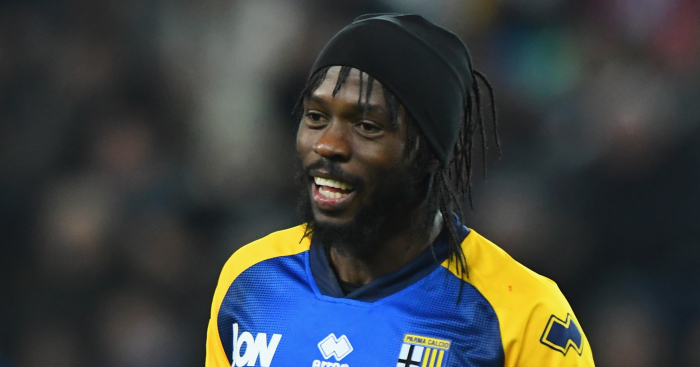 When Gervinho scored a stunning solo goal at the start of the season and followed it with goals against Empoli, Torino and Sassuolo, we wondered if things were beginning to change for the Ivorian.

Back in Serie A with Parma after a spell in the Chinese Super League, could it be that the spell outside Europe had changed the former Arsenal man? Had it forced him to dial back a bit on the decorative nonsense and turn into a boring, straightforward goalscorer?

Then we saw Parma’s six-goal thriller against Juventus and realised the answer was “no, obviously not, this is still Gervinho”.

The beauty of having someone like Gervinho in your team is that he doesn’t know when he’s beaten. And, if we’re being honest, sometimes he really should know.

This can often lead to little more than the sight of him running himself into the ground chasing a lost cause, as those around him decide it’s time to live to fight another day.

The Juve fixture was supposed to be one of these. Cristiano Ronaldo had restored the hosts’ two-goal advantage barely a minute after Antonino Barillà’s header had given Parma hope, and that was meant to be that.

Juve went into the game 30 points clear of their visitors, after all, and Parma had shipped seven goals on their previous trip to the Juventus Stadium in 2014. The newly-promoted side could have been forgiven for settling, but then Gervinho went and did this.

It is the sort of goal which gives you hope simply by virtue of how little sense it makes as a concept.

A backheel is supposed to be instinctive, something you turn to because all other options have suddenly become more difficult. Think back to Thierry Henry’s finish against Charlton, and it was the only way of getting the ball past Dean Kiely from his starting position.

He has plenty of time to curve his run and approach the ball head-on, giving himself an easier finish, but the easier finish was not what the situation called for.

Juventus went into the game with 19 wins and two draws from their 21 Serie A games.

They had conceded five goals at home all season, and the last time they surrendered a two-goal lead in the league, home or away, was October 2017.

Pulling one back in normal circumstances wouldn’t do it – they’d just see out the game as normal for a 3-2 victory. If Parma wanted to have any chance of anything, the goal would need to be stupid enough to bring in to question the entire concept of what is expected in football.

It doesn’t even matter that Gervinho’s effort takes a deflection off Daniele Rugani on the way in, you were still left with the confusing scenario of “wait, if this can happen then what else is possible?”.

Cue Gervinho stepping up again in stoppage time to fire in a powerful shot straight at Perin.

Without the first goal still weighing on his mind, the goalkeeper would have probably made the straightforward save, but instead he had the spectre of narrative putting an arm round him, stroking his neck, and telling him “no, let it go, it’s meant to be”.

Now, I don’t want you to think we’ve overlooked the most important part of all of this, namely that Gervinho did exactly what he was planning to do.

We’ve come to accept his entire gameplan is modelled on instinct and on outfoxing even himself, so the idea of him adding an element of unsurprise to his usual material makes for a very dangerous combination indeed.

Gervinho already has eight goals in 16 appearances this season, just one shy of his best return in any of his three Roma seasons, and his three goals this year against Juve represents 20% of the champions’ goals against tally in Serie A.

Of course, it wouldn’t be like him to actually make things easier for himself by introducing forward planning, and it’s exactly like him to struggle his way to four goals in 29 Chinese Super League games, only to get halfway towards that tally in 20 minutes in Turin.

If Gervinho’s entire career can be boiled down to a man hurdling a 10-foot wall instead of walking through an open door, the performance at the Juventus Stadium is equivalent to him being told about the door and sat down to watch other people walk through it, and taking that as an incentive to simply hurdle the wall more quickly.

Some things will never change, and we’d be worried if they did.