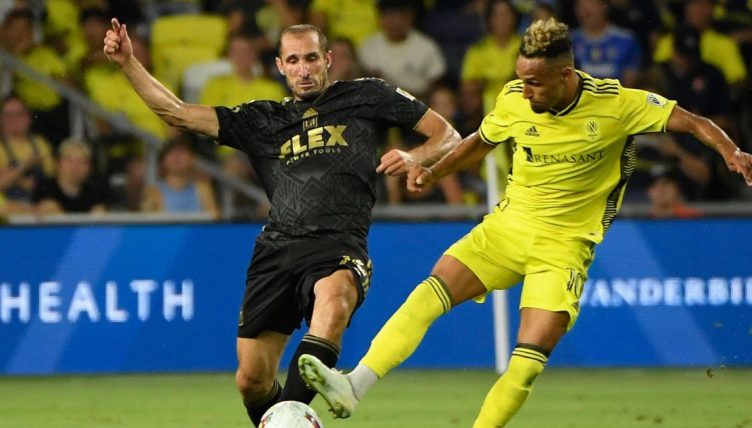 When you sign Giorgio Chiellini, you don’t just sign a footballer, you sign an ideology, a philosophy, a fully-formed approach to life. LAFC fans found that out in resounding fashion on Saturday evening during their 4-1 MLS victory over Real Salt Lake.

Chiellini is a modern football great. One hundred and seventeen Italy caps. Over 500 appearances for Juventus in the most successful period in the club’s history. Nine Scudetti, five Coppas Italia, a European Championship with the Azzurri.

Most importantly, though, Chilleni is the embodiment of one of football’s great intangibles – that desire to defend for his life, to stop the opposition scoring at all costs, to do whatever is necessary for victory.

To get the measure of the man, you only need to look at the photo at the top of his Wikipedia page. There’s a grin on his face, the sort of knowing smile you might see on the face of a wayward teenager who’s just set up the perfect practical joke.

The look in his eyes screams ‘I’m going to beat you and there’s absolutely nothing you can do about it.’ In fact, we’d place a bet that he was replaying his foul on Bukayo Saka in the Euro 2020 final in his head at the very moment that photo was taken.

Chiellini has carried that same doctrine with him throughout his entire career – and now he’s spreading his joyous shithouse gospel across the USA one game at a time.

On Saturday, Chiellini played his fourth match for his new MLS side LAFC.

Gareth Bale was there with him, of course, and the Welshman scored a deliciously brazen solo goal to wrap up their 4-1 destruction of Real Salt Lake away from home.

Yet the most head-shakingly, awe-inspiringly impudent moment of the game came not from LAFC’s wing wizard but from their wizened, wiley Italian defender.

With about 20 mintues to go, Chiellini got his angles all wrong on a Real Salt Lake clearance and it looked for all the world as if the ball was about to bounce over his head and allow Sergio Cordova in for a run at goal.

Chiellini was having none of it. Knowing that at his age he’d never catch the 24-year-old Venezuelan forward, Chiellini turned the shithouse volume up to 11 and stuck both hands in the air, pulling off a perfect beach volleyball spike to send the ball back in the other direction.

He didn’t really need to do it. LAFC were already 3-1 up. His centre-back partner Jesus Murillo probably had the space behind him covered.

But this is Giorgio Chiellini. He was never going to take that chance. He knew that was his only opportunity to stop a potentially dangerous counter-attack from developing and he grabbed it in his big, warm, terrifying embrace.

He also knew he’d get away without serious punishment. The commentators suggested it might be a red-card offence, but there was no chance. Chiellini was on the halfway line, there was a man behind him and while his intervention may have enraged his opponents, it in no way endangered them.

It was wrong, of course, but you can’t help but tip your hat at his temerity, at the perfect Chiellini-ness of it all. This is a man who has mastered his art.

Just look at the little shrug of the shoulders as the referee brandishes the yellow card. He knows what he’s done and he’s absolutely delighted with himself.

When LAFC brought Chiellini in, they must have known this is the sort of thing they were letting themselves in for. And rest assured, there’ll be plenty more of it to come.

Chiellini is the high priest of shithousery and he’ll preach it wherever he goes.

11 transfers from the summer of 2022 you might have missed