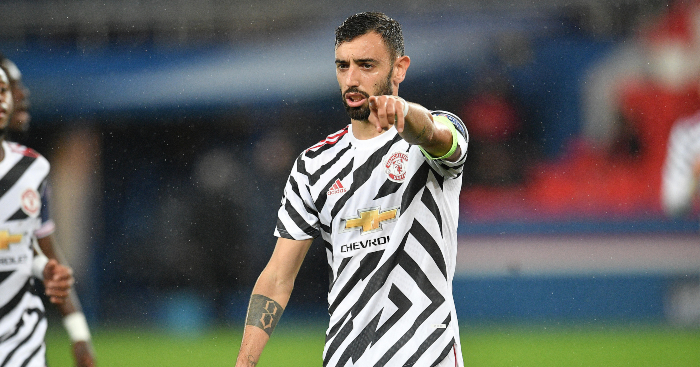 Let’s not gloss over it: Manchester United were so incredibly poor during the first half in their match against West Ham, looking stale with the ball and shaky without it.

Ole Gunnar Solskjaer opted to bring Bruno Fernandes and Marcus Rashford off the bench at half-time to try to fix things, with his side having gone into the break 1-0 down following Tomas Soucek’s opener.

It certainly worked, as the Red Devils ran out eventual 3-1 winners, and once more Fernandes was the subject of a statistic that sums up his remarkable influence on this Manchester United side.

In his 45 minutes on the pitch, the 26-year-old created eight chances in open play – more than any player has managed in one Premier League match this term.

Bruno Fernandes created 8 chances from open play vs. West Ham, the most any player has created in a Premier League game this season.

He came on at half-time. 🤯🤯🤯 pic.twitter.com/raRNF9ROcm

The above graph emphasises that a lot of these aren’t just simple sideways passes. Fernandes has the vision and ability to split opposition defences with a single pass, as was on full display during the second half against the Hammers.

Not only did the Portugal international get his team-mates in positions to score, but he also completely helped to change the pace and flow of the game.

It is this sort of influence that indicates why Solskjaer was hopeful that he could rest his talisman in the first place, with a key Champions League match against RB Leipzig coming up on Tuesday.

The Norwegian was forced to call upon his star man in the end. Thankfully for Solskjaer, Fernandes made sure his introduction was worth the wait.