Goals may have dried up, but Roberto Firmino still has magic in his feet 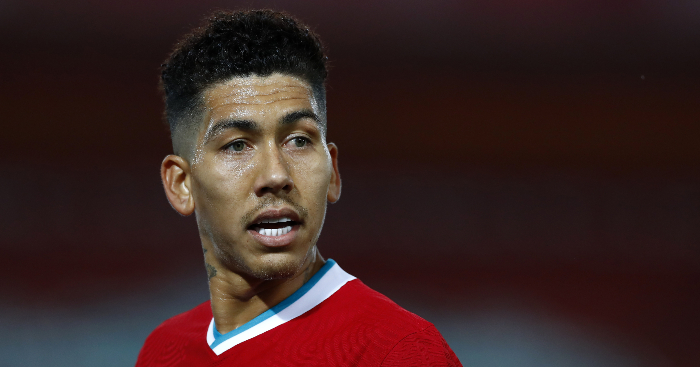 Roberto Firmino is never going to be the most prolific No.9 Liverpool have ever had, but he may well be the most fun.

Firmino has scored just twice in 17 appearances in all competitions for Jurgen Klopp’s Reds so far this season, but goals are overrated. He knows nutmegs are where it’s at. And his latest was one of his best.

The Brazil international knows that Sadio Mane, Mohamed Salah and Diogo Jota have got Liverpool covered for the really important stuff like winning games and sticking the ball in the back of the net.

That’s all well and good, but did any of the four goals scored against Wolves cause Ally McCoist to burst out into a hearty chuckle? No, no they did not.

And really that’s the only reasonable reaction to the latest example of his impudence.

Under pressure from Leander Dendoncker, dragging the ball away from the imposing Belgian, there’s a split second whereby it looks as though Firmino has lost control and let it out of his grasp.

That’s where Joao Moutinho spots his opportunity to pounce. It’s there to be got.

Just get it, Moutinho thinks, like a cat going after a laser pen.

The issue is that Firmino* knows exactly what he’s doing. There’s only ever the illusion of having given up control. The ball was never there to be won, and right on cue when Moutinho pounces, out comes the deftest of flicks from the Liverpool striker.

And there it is. That mortifying rush of blood to the head where you realise you’ve been done. Through your legs and behind you.

In that moment, in front of 2000 fans returning to the Anfield stands and millions more watching at home, Moutinho has that exact same mix of panic and regret you feel when you realise you’ve locked yourself out of your house.

The Wolves midfielder does what any right-thinking person would do in that situation, and what every player in history has tried after suffering the mortification of being nutmegged, and does what he can to make amends.

Sure, there’s a dangerous opening if Firmino can get past you and onto the end of the ball he’s just played through you. A cynical block is the clever thing to do.

But this is no longer about football and what’s best for your team. It’s about ego. It’s about – for the love of God – not allowing Firmino to complete your humiliation and get onto the end of that ball.

And it worked. Moutinho got in his way and ensured a free-kick would be his only reward.

Yet we’ve all seen what he’s done to you, Joao. In perfect 4K, replayed in slow motion and soundtracked by a fit of laughter from a jovial Glaswegian.

*Buy Roberto Firmino and thousands of other players on Football Index. 18+, UK and Ireland customers only, begambleaware.org. T&Cs apply.

Djibril Cisse, Liverpool, and the perils of a career of almost greatness