Goran Pandev: The last of Inter’s treble winners still bossing it at 37 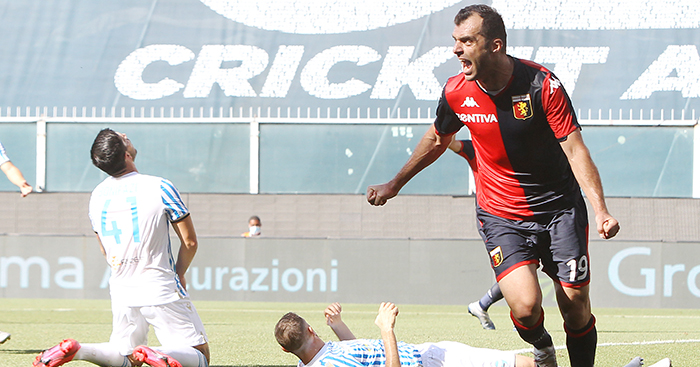 A decade after winning the Champions League with Inter, 37-year-old Goran Pandev had his most prolific season in ages. He even managed to score with his face.

Ten years have passed since Inter enjoyed the most successful season in their history, completing the treble under Jose Mourinho.

It was a momentous achievement, enabled by the South American steel of Lucio, Walter Samuel and Esteban Cambiasso combined with the individual flair of players like Wesley Sneijder and Samuel Eto’o.

Unsurprisingly, most players from that team have now retired.

Javier Zanetti became vice-president of Inter in 2014, while Dejan Stankovic, Patrick Vieira and Thiago Motta all went into management.

Kenyan midfielder McDonald Mariga, the older brother of Victor Wanyama, quit football at 31 to become a politician in his home country.

But a handful of players from the 2009-10 season are still playing.

Ricardo Quaresma, now 36, is without a club after leaving Turkish side Kasimpasa, and 31-year-old Marko Arnautovic — unloved and rarely used by Mourinho — is earning big money in China.

Mario Balotelli, 30, is back in Italy, but his stint with Brescia has been a disaster.

Neither Quaresma nor Arnautovic played a huge amount of football under Mourinho, but a versatile forward named Goran Pandev certainly did.

The Macedonian, who recently turned 37, played 27 times during the treble campaign and started the 2010 Champions League final, in which he helped Inter beat Bayern 2-0.

Of the 22 starters from that match, only he and Thomas Muller are yet to hang up their boots.

And Pandev, far from going out quietly, just played one of the wildest seasons of his career, recording his best goal tally in a decade, scoring a season-saving winner with his face, and even tempting Antonio Conte to bring him back to Inter.

On December 21, 2019, in the last match before the winter break, Pandev watched on as Genoa, his current team, faced Inter, the club that brought him to Italy in 2001 then re-signed him in 2009.

Pandev couldn’t play because two weeks prior he had received a red card in a 2-2 draw with Lecce.

In that clash, he had stolen the show by scoring a cheeky long-range goal (in the manner of his old team-mate Dejan Stankovic), getting fouled for a penalty, then picking up a second yellow card to reduce an already-depleted Genoa to nine players.

Now, the Macedonian could do nothing as Inter put one, two, three, then four goals past his team.

The thrashing put Genoa bottom of Serie A.

On an individual level, Pandev’s start to the season had been at least as bad as his team’s. Benched for the first seven games, the forward’s first start was a 5-1 defeat to Parma in which he was subbed at half time.

And it wasn’t until the week after — by then late October — that he scored his first goal of the campaign.

So by Christmas, with his side facing relegation, Pandev must have had a lot on his mind. Was he no longer at the required level? Could he do anything to prevent his club’s demise?

In their first game of 2020, Genoa simply couldn’t afford to lose against mid-table Sassuolo, and their returning veteran was trusted to lead the line alongside Antonio Sanabria.

The game was as delicately balanced as a Ligurian pesto.

The game ebbed and flowed, and the teams were still tied with five minutes to go.

Seasons are defined by moments of luck.

When 10-man Inter put on a defensive masterclass against Barcelona in the 2010 Champions League semi-final, they thought they’d lost the game in stoppage time to a winner from Bojan Krkic.

To Mourinho’s relief, the goal was ruled out for a handball.

Those lucky moments don’t tarnish a team’s achievements, but they show how volatile football can be. The tiniest margins can have the biggest consequences.

And Goran Pandev was probably thinking something along those lines when, in the 86th minute of the game against Sassuolo, the ball rebounded off his middle-aged face and into the Sassuolo net.

It was a dramatic and fully deserved slice of fortune.

This was only the third time in the campaign Pandev had played a full 90 minutes, and by this point he must have been absolutely shattered.

Yet with Genoa building a counter-attack, the veteran ran — quite slowly — from midway inside his own half into the Sassuolo box, timing his final burst of pace to perfection.

His initial prodded shot was saved, but Pandev, tumbling down under the goalkeeper’s challenge, managed to get a nose on the rebound and divert the ball home, lifting Genoa two places in the Serie A table.

Somehow he still had the energy to sprint to the sidelines and execute a perfect knee slide.

At that moment there was still half a season to play, but Pandev’s goal — ending an eight-match winless streak for Genoa — would prove pivotal.

In the end, Genoa could count themselves lucky to retain their experienced attacker.

Towards the end of January, there were rumours that Antonio Conte — always keen to get hold of veterans like Ashley Young and Alexis Sanchez — wanted to tempt Pandev with the offer of a third spell at Inter.

“In January there was a romantic flashback from Inter,” confirmed Pandev’s agent.

Fortunately for the Serie A strugglers, the forward was committed to his present relationship.

“Genoa had to be saved,” the agent explained.“He is linked to the Rossoblu colours and would never have left.”

And save them he did.

More good results meant that, by the last day of the season, his side only needed to match Lecce’s result in order to guarantee survival.

They did so without breaking a sweat.

Lecce lost 4-3 to Parma, and Genoa — despite somehow reducing themselves to nine men again — won 3-0 against Hellas Verona, Pandev setting up the second goal with a neat prodded pass.

“I am happy if the salvation has brought a little relief to the Rossoblu hearts,” Pandev reflected afterwards.

Sure, it would have been nice to see Pandev back in Inter colors, playing in a Europa League final 10 years after the amazing Champions League triumph, but his face-goal and other heroics were a major highlight of the Serie A season.

Alternative highlights of 19-20: Alexis idly dribbling then spitting on himself