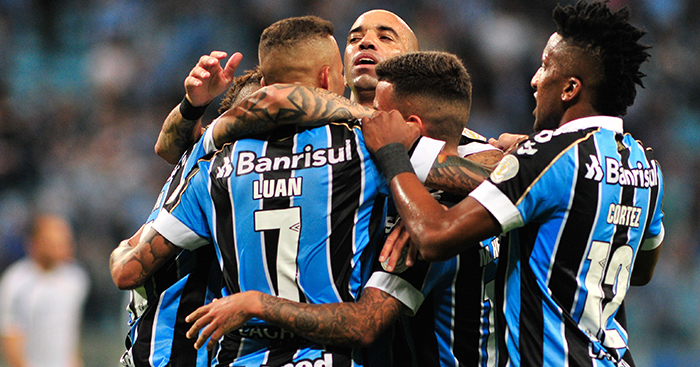 With six lightning-fast strokes of their black, blue and white brush, Grêmio had painted a counter-attacking masterpiece. And what a time to do it.

Trailing 1-0 with four minutes to go in their Copa Libertadores semi-final first leg at home to Flamengo, the Tricolor Gaúcho needed to draw level to take some hope into the second game at the Maracanã.

For the neutral, it was the goal that the occasion deserved and helped to take the edge off the feeling that the spectacle had been irredeemably tarnished by VAR.

And to make the equaliser taste even sweeter for the fans jumping up and down in the Arena do Grêmio, it was almost exclusively homemade.

Matheus Henrique, Grêmio’s 21-year-old midfield revelation and surprise inclusion in Tite’s most recent Brazil squad, picked the ball up after Everton Ribeiro’s loose pass on the edge of his own penalty area.

To most normal people, it didn’t look like much was on. But Matheus took a touch inside, spotted Pepê in space and played a sweeping ball with his left foot, setting off a devastating chain reaction.

Pepê, another youngster who has burst onto the scene in 2019, turned and did what he does best, accelerating towards the opposition goal.

Flamengo players knew what was coming next. Willian Arão looked around, desperately hoping that he’d see his team-mates flooding back to help defend, but it was five on five and all he could do was hope.

Luan used the last bit of petrol he had in the tank to pull out to the left and got the through ball he wanted from fellow Grêmio academy graduate Pepê. Luan paused, saw Maicon running through the middle and played the ball straight into his stride.

Maicon rarely takes more than two touches and after shifting it out of his feet with his first, he sprayed it wide to Copa América winner Everton ‘Little Onion’ Cebolinha with his second.

Pepê, fresh off the bench, had continued his charge all the way into the six-yard box and flew in to meet his root-vegetable-look-alike team-mate’s cross-cum-shot. The stadium exploded.

🔵⚫⚽💪Pepê was on hand to equalize late for @Gremio_en against @Flamengo! pic.twitter.com/aZTewyzyY7

Whether they deserved it or not on the balance of the 86 minutes of football that had come beforehand, Grêmio had grabbed onto a lifeline with one of the most devastating counters you are likely to see.

Flamengo, on the other hand, would have felt hard done by, especially after seeing a goal chalked off for perhaps the narrowest offside decision yet to be given by the VAR anywhere in the world.

Gabriel ‘Gabigol’ Barbosa – he of Inter Milan and Benfica flop fame – has been busy building his reputation back up in Brazil this season, grabbing 32 goals and six assists in his 43 games, including 18 in 18 in Brazil’s top-flight.

Such is the frequency of his goalscoring that Flamengo fans have taken to holding up cardboard signs at the Maracanã with ‘Today there’s going to be a goal from Gabigol’ scrawled across them. In recent weeks, they have rarely been wrong.

And on Wednesday night, Gabriel thought he had another to add to the growing collection.

It was already the second time the Rubro-Negro had had the ball in the net on the night, but Everton Ribeiro’s effort had been ruled out by the VAR for a clear Gabigol push in the build-up, showing that immature side some thought he’d left behind.

When Gabriel was played through by Bruno Henrique and saw his shot squirm past the limp wrists of Paulo Victor and into the net, he thought he’d made amends. The VAR, though, was having none of it.

This was just given offside by the VAR in the #Libertadores

Not content with footballers being the star attraction at a football match, it intervened to decide that the little plastic bit on the end of Gabigol’s shoelace was gaining an unfair advantage by being in an offside position. For those who wish to verify the decision; magnifying glasses at the ready, please.

Flamengo, despite the video assistant’s best efforts, did go on to open the scoring through a Bruno Henrique header midway through the second half, but they should really have been out of sight by then given their first-half dominance.

Yet Grêmio reacted well to going behind and came back into the game towards the end.

Before their equaliser, Everton forced a spectacular save from Diego Alves with a shot so powerful that it forced the Flamengo ‘keeper to have his wrist bandaged shortly afterwards.

🤩🧤💪 Diego Alves left it all on the pitch and provided a brilliant save to deny Éverton! @Gatorade pic.twitter.com/m3FeDy6UFX

Portuguese mastermind Jorge Jesus and his Flamengo players might not feel they were treated entirely fairly on the night, but the result is a perfect one for those who want to see fireworks from the second leg.

Flamengo fans will be getting their markers and corrugated carboard out to make their signs, hoping that there really will be a goal from Gabigol next time out. But if he fluffs his lines, Grêmio’s lightning-quick academy graduates will be ready to pounce.

Whichever way it goes, it is certain to be entertaining.