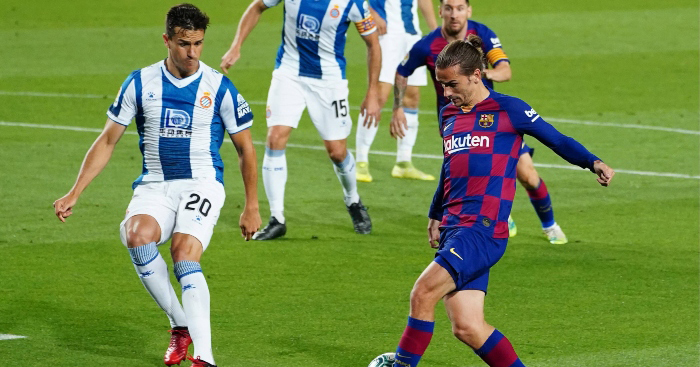 Just a couple of weeks ago, we were hearing Antoine Griezmann might be sold by Barcelona because of his incompatibility with Lionel Messi. That doesn’t seem to be too much of an issue now.

In two successive games, the duo have linked up with near-telepathic backheels, producing big goals for their team.

And no one will be happier than manager Quique Setien, who has not only held onto his job as a consequence but is now overseeing a Barca side which looks far more hopeful going into next season.

Still, the derby against Espanyol on Wednesday was much harder work than it had any right to be.

Barcelona’s opponents went into the game bottom of the league and knew they would stay there regardless of the full-time result, but they fought like a team which knew defeat would mathematically seal their relegation.

It would need some quick-thinking, then, to stop Francisco Rufete’s team continuing to survive by doing the simple things as they should.

And so, at the moment Espanyol’s defenders are bracing for a ball across the face of goal, getting into position, Griezmann is already setting himself to celebrate having laid on a perfect near-blind ball for Messi.

It doesn’t matter that the eventual finish comes from Luis Suarez after Messi’s initial shot is blocked. This goal is all about the Griezmann backheel, delivered almost between steps, let alone between moments.

Luis Suarez ends up the difference maker for Barca! 🔵🔴

Here's the goal that won the derby for Barcelona, kept them in the title race, and relegated Espanyol 👀 pic.twitter.com/cuv2wMKAML

There’s acting quicker than your pursuer, but here the Frenchman somehow manages to act quicker than even his own mind, delivering on instinct’s instinct.

He barely needs to wait for Suarez to tuck the ball away to begin his celebration, and it’s telling that he runs straight to Messi as if to reinforce the telepathy.

This is no coincidence and effectively acts as the second part of an exchange which began over the weekend in Villarreal.

On that occasion, it was Messi with the backheel and Griezmann with the left-footed shot, though such a description does the goal a great disservice.

The way Messi collects the ball from his colleague could easily be interpreted as a dominant squad member trying to do everything himself, right until you realise that’s exactly what he wanted the Villarreal defenders to believe.

With the ‘Selfish Messi’ myth in full force, Griezmann is left alone to receive a blind backheel from a man who knows exactly where he’ll be – though some more work is required.

The Frenchman’s finish is about as satisfying as they come, with the ball floating over Sergio Asenjo and ducking at the last minute to avoid a collision with the crossbar.

Goals which only just go in are often more satisfying than those which fly in, purely on the grounds that they punish the conceder by giving them the impression that they might have got away with it. It’s like a poker player letting an aggressive opponent bluff off their chips, only to realise after calling off the all-in bet that they were losing the whole time.

It’s the unthinkingness of it all which makes the goal so beautiful, though, with both of the players involved working in an advanced form of autopilot where the AI has somehow learned cooperation.

When you begin to acknowledge that, the idea of actively standing in their way becomes more hopeful than calculated, and when your counterargument to Messi and Griezmann is “let’s hope I get lucky” it’s unlikely to end well for you.

Barcelona still have some problems in terms of their squad makeup, and they still have work to do going into the 2020-21 season, but the conundrum of how to use Messi and Griezmann in tandem has vanished to the point that the idea it was ever a problem feels preposterous.

It feels like many of us have been overthinking the supposed incompatibility issues between the two, and this oversight becomes all the more embarrassing when you realise Griezmann and Messi don’t need to employ conscious thought on any level to get Barcelona on the scoresheet.

Griezmann & Suarez scored stunners, yet we still want to talk about Messi