Griezmann & Suarez scored stunners, yet we still want to talk about Messi 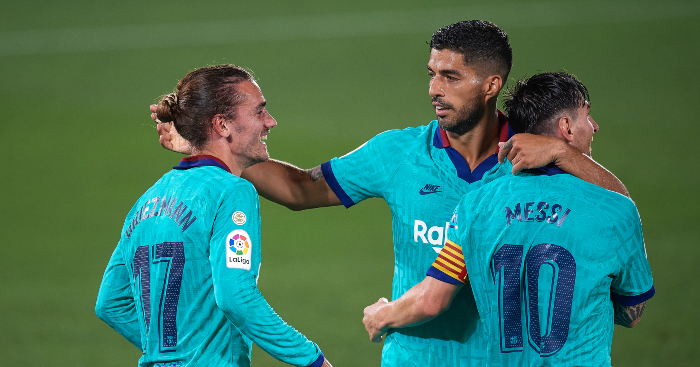 Just as Barcelona‘s season was threatening to implode in a blaze of soap opera and in-fighting, Lionel Messi and co reminded us all why we so often find them simply irresistible.

After drawing three times in four matches, Barcelona have allowed a Sergio Ramos-inspired Real Madrid to open up a four-point gap at the top of La Liga, prompting serious questions to be asked of their transfer policy, manager Quique Setien and the futures of some of their ageing key players.

But then just as all appeared to be falling apart around them, Barca travelled to Villarreal on Sunday night and produced the kind of performance that left both their players and fans grinning from ear to ear.

After coming under fire in recent weeks, Setien deserves plenty of credit for changing things up to get the best out of his attacking options. The manager had been criticised for leaving Antoine Griezmann on the bench until the dying minutes of Barcelona’s 2-2 draw with the forward’s former club Atletico Madrid.

Having been the main man for so long at Atleti, Griezmann has underwhelmed in his first season at the Camp Nou since joining for €120million, often finding himself stuck out on the left wing. But the France international was moved into a more comfortable central position against Villarreal, operating in a front two alongside Luis Suarez with Messi deployed behind them at the tip of a diamond.

Setien’s tactical switch worked wonders as both Griezmann and Suarez scored stunning goals in the 4-1 victory. Messi may have failed to score – he saw a second-half effort ruled out by VAR – but he still left us picking up our jaws off the floor with two beautiful assists.

Both sides had scored within the opening 15 minutes, and Messi continued the frantic start to the game in the 19th minute. The little magician brought down a long ball on his chest and left one defender on the floor with his next touch.

Turning to face Villarreal’s goal, another defender fell to floor at the mere prospect of trying to stop Messi, before the forward burst through two challenges to find Suarez on the left-hand side of the penalty area. Suarez took one look up and bent a wicked shot into the top corner, a finish befitting of such a wonderful assist.

What a goal from Barcelona! 😱

Messi plucks the ball out of the air from the goal kick, sets off on a mazy run, and then Suarez bends one into the far corner 🔥

Part of the criticism of Barcelona in recent years – that can also be applied to Argentina – has been their over-reliance on Messi. It’s not exactly a bad problem to have, relying on the greatest player in history, but others have perhaps allowed the 33-year-old to handle all responsibilities, or felt intimidated by his prowess.

Against Villarreal, his team-mates stepped up to match his brilliance, with Griezmann the next to follow after Suarez.

Once again finding himself in a pocket of space on the edge of the box, this time Messi ignored the option to his left and instead opted for a cheeky backheel to present Griezmann with a perfect opportunity to strike at goal.

Messi’s influence appears to be rubbing off on Griezmann, who deftly chipped the ball over goalkeeper Sergio Asenjo in an effort similar to Leo’s strike against Real Betis last season. It was Griezmann’s first goal since football’s restart, and Messi’s 19th La Liga assist of the campaign, setting a new personal best.

Griezmann’s celebration also felt telling. There have been plenty of stories this season suggesting he has failed to gel with Messi on and off the pitch in Barcelona, which did not appear the case when the duo warmly embraced with huge grins etched across their faces.

By hook or by crook, Setien may have finally found a way to keep Barcelona’s front three smiling for the rest of the season. The title may now be a stretch too far, but with the supporting cast now coming to the fore to help Messi, the Champions League may not feel like such an unrealistic prospect any more.