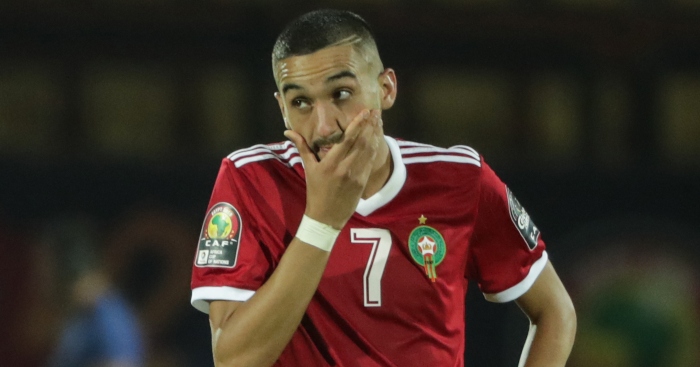 It’s safe to say that Chelsea playmaker Hakim Ziyech has been enjoying his football this season, regularly putting on a real show for the supporters at home.

The 27-year-old had to be patient as he made his way back from injury but has made his mark since coming into the Chelsea fold, recording two goals and three assists in his last four appearances.

There was no chance that he was going to fade into the background when he went on international duty with Morocco, teaming up with the likes of Inter Milan’s Achraf Hakimi, former QPR hero Adel Taarabt and Wolves defender Romain Saiss.

He was integral to their 4-1 victory over the Central African Republic, scoring two goals and getting another assist, helping to earn the three points that keep Morocco top of their African Cup of Nations qualifying group.

While there was a lot to admire about Ziyech’s performance, his second strike was undoubtedly the highlight of the game.

Looking at the goal above, the brilliant technique involved is clear to see, as he strokes the ball through the crowd and somehow finds the bottom corner.

However, it is the sheer audacity to even try a shot from that acute angle that we absolutely love.

Usually, when someone plays a short corner, we’re left screaming that they should’ve just got a cross into the box as they muck around with the ball before being closed down.

Not here though. It’s all one-touch and when Ziyech can guide the ball into the back of the net like that it would seem silly for him to simply put it in the mixer.

So much of the midfielder’s play throughout the game oozed quality, with his through ball to Hakimi for the opener splitting four of the players in blue, giving the former Real Madrid man a fairly simple finish after making an intelligent run.

Just to make your friday a little better #AFCON2021Q pic.twitter.com/5tXMnY3qXy

Ziyech even had a hand in winning the penalty that he converted, as it was the Chelsea star’s pinpoint pass into the striker that allowed him to back into the defender, which led to him being fouled.

All in all, Ziyech’s quality was on full display throughout Morocco’s victory over the Central African Republic, but it is this showing of audacity and pure skill that put the cherry on top.