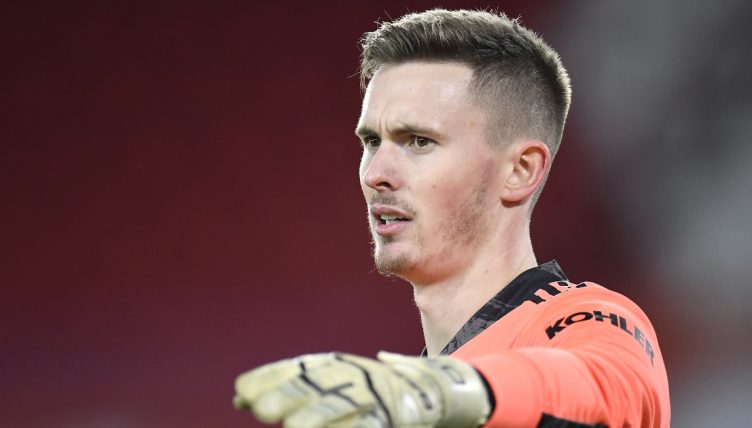 As Hakan Calhanoglu’s looping cross carved through the Milan sky, Luke Shaw tussled desperately with Zlatan Ibrahimovic at the back post, while Dean Henderson took a couple of deep breaths and readied himself.

The first leg of this Europa League last-16 clash had ended in bitter disappointment for Manchester United and Henderson himself.

Amad Diallo had given Ole Gunnar Solskjaer’s side the lead at Old Trafford with a brilliant headed finish, only for Simon Kjaer to flip the tie’s momentum with a last-minute header of his own, one which the 24-year-old goalkeeper should have saved.

There were loud calls from many at the end of last season for Henderson to become United’s new number one.

The opportunity to have “one of their own” in goal while potentially bringing in a huge lump of cash for David De Gea appealed greatly and you could see why.

But throughout much of this season, Solskjaer has continued to favour the experienced Spaniard, now into his tenth year at Old Trafford.

In all competitions in 2020-21 so far, De Gea has made 29 starts, while Henderson has made 18. A far more even distribution of games than between most goalkeepers, but it is clear that a first-choice remains.

Solskjaer knows that a big decision awaits him this summer. Henderson has reportedly made no secret of his desire to be number one at Old Trafford, informing those at the club that he has ‘no intention’ of playing a supporting role again next season. Something will have to give.

As a 39-year-old Swede waited for a cross to meet his head on Thursday night, ready to cancel out Paul Pogba’s opener, plenty hung in the balance. With De Gea away on maternity leave, Henderson knew there was a time limit on this latest spell as United’s number one. Another mistake like in the first leg and Solskjaer’s dilemma suddenly has a much simpler answer.

De Gea has not been flawless in his time in the North West. In fact, the stats from this season show that he (one every 69 minutes) concedes far more frequently than Henderson (one every 160 minutes), and that the pair each have 10 clean sheets to their name, despite Henderson playing 11 fewer games.

But De Gea has built up a stronger reputation between the sticks during his decade at Old Trafford, playing a central role in the winning of four major trophies. More than United’s European status was on the line on Thursday night.

Ibrahimovic versus Shaw was never likely to be a fair fight and the striker’s slick pony-tailed head, glistening under the San Siro lights, met the ball cleanly.

Dramatically, the header’s trajectory seemed to imitate that of Kjaer’s a week earlier, although this time there was added pace attached. A perfect trial of redemption.

If a small part of Solskjaer hoped for Henderson to make his troublesome summer quandary simpler, he was well out of luck.

Springing off the balls of his feet, an orange arm lasered towards the ball and an iron palm eviscerated any chance of the Swede scoring against his former teammates, ensuring United’s progression into the quarter-finals at the same time.

Lost in that moment, too, was any hope of Solskjaer’s summer decision being made an easy one.