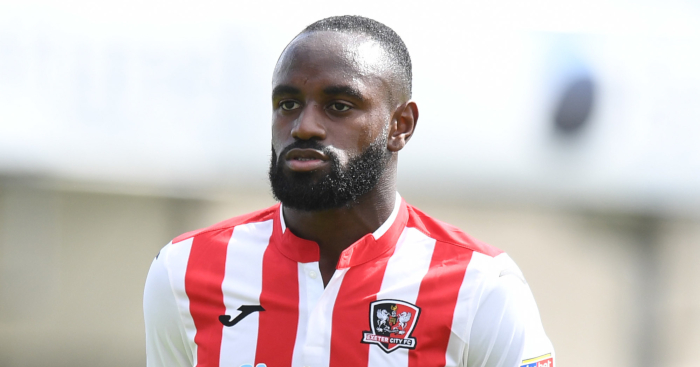 Some of the best goals we end up seeing are those from the most unlikely sources.

More people will remember Pajtim Kasami’s goal for Fulham against Crystal Palace than will recall any given goal from a more prolific Premier League player, because it’s the goal you associate with him, while Victor Wanyama’s thunderbolt for Tottenham against Liverpool in 2018 is more memorable to the neutral than most if not all of Harry Kane’s goals for the club.

The latest player to score a goal that will live with him forever is Hiram Boateng, a man whose goalscoring record is almost anti-prolific.

In more than 100 games before this weekend, the midfielder had scored just two league goals for anyone. And yet, in his second season in Devon after leaving boyhood club Crystal Palace, he scored what will surely be the best goal of his career and what would almost certainly the best goal of most other players’ careers, too.

Even finding himself as one of the furthest players forward, as Boateng does when receiving a lofted ball from Craig Woodman, there’s no reason to assume a goal or even a shot is forthcoming

However, whether it’s down to instinct, Premier League academy quality or just being possessed with the spirit of Pelé, he did this.

Boateng was on Palace’s books back in January 2016 and just two weeks away from his sole Premier League appearance for the club when Selhurst Park was the setting for a goal similar in its instinctive brilliance.

It might have come at the wrong end from the Eagles’ perspective, but Dele Alli’s late strike may well have lodged itself in Boateng’s mind, giving him a target to shoot for three years on.

As a young player waiting to make your bow, you’re always encouraged to aim for the stars. But when you witness something as special at the England midfielder’s goal, you can be forgiven for thinking you can’t come close.

In Boateng’s case, though, he just had to be confident his chance would eventually arrive.

With all credit to Craig Woodman, his ball is hardly the kind he would have expected to end up as an assist: all the hard work is Boateng’s, to the point that it feels he ought to earn an assist bonus for his own strike.

Each component of the goal is special enough in its own right, but to bring it all together is impressive to the point of seeming unfair.

To even keep the ball within his control is no mean feat, with few able to kill such a pass stone dead with his chest.

The defenders seem to back off at that moment, almost willing the midfielder to take time to weigh up his options and ultimately overthink the situation. Often, such a move can be one you instantly regret as the player spots a pass he might have missed if forced into immediate action, but here it acts as a retrospective double-bluff.

The Port Vale defence might be willing Boateng to do one thing or another, but as far as he’s concerned, they might as well not even be there. To take time to think would be to break the spell he has imposed on himself: to score a goal like this, you almost have to be unthinking in your actions, and this pure instinct is what convinces him to refuse to let the ball drop.

The second touch turns him into a diabolo performer, caressing the ball back into space as if his own achievement is secondary to the enjoyment of those watching. It’s rare to see an angled volley become the easiest part of a goal, but it’s hard to argue that it wasn’t in this case after watching the way he lays on the chance for himself.

Hiram Boateng is fucking magic. And if anyone says any different, they’re wrong. #ecfc

Boateng’s chest control is the top shelf whisky and the next touch with his left foot is the perfect measure of vermouth. The finish on the volley, itself better than it has any right to be, acts simply as the splash of bitters and maraschino cherry to elevate the other ingredients from satisfying in the moment to breathtaking enough to live long in the memory.

It’s the sort of goal that few are even capable of scoring, to the point that we might ordinarily overlook such greatness simply because most of the elite talents who can produce it are those who tear up the rulebook every single week. The fact that a League Two player has pulled it off gives us all the more reason to stand and gawk at the magnificence.

It reminds us that, while there are gaps between the highest level and the lower leagues, you still need to have a lot about you to make it at any level of the professional game.

Without a volley executed as well as that, we might still be talking about Hiram Boateng for a whole weekend. Now, though, there will be Exeter fans who will tell the story to their children and their children’s children.

Even if they weren’t at the ground to witness it first-hand, they’ll have to lie and say they were.