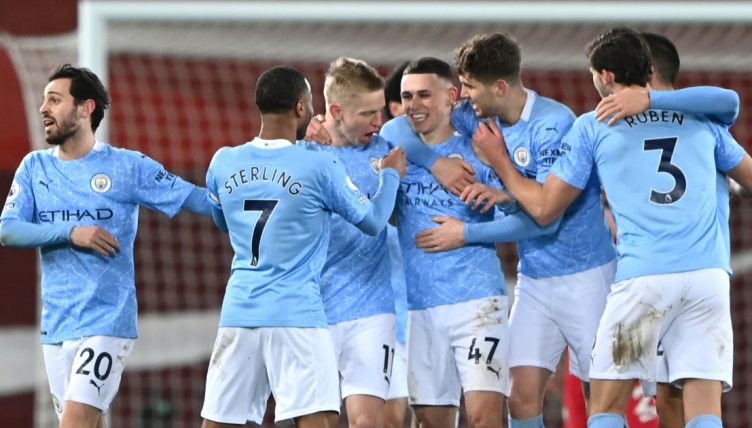 You only need to have a cursory browse of the headlines to see the name on everyone’s lips after Manchester City‘s massive 4-1 win away at Liverpool. Arise, Philip Walter Foden.

In 2021, this is the biggest game in English football, the most dominant duopoly in the Premier League since the peak years of Alex Ferguson’s Manchester United and Arsene Wenger’s Arsenal.

And with a statement win on Merseyside, Pep Guardiola’s men moved 10 points clear of the reigning champions. It’s fair to say it made an impact far and wide.

LA Lakers star Alex Caruso could only repeat his claim that Foden is a world-class talent, with the requisite flame emojis, while Carles Puyol observed: “Vaya jugadorazo” – “What a great player”.

Ilkay Gundogan might have responded to his penalty miss by scoring twice, Alisson had his own Fabian Barthez moment(s), John Stones continued his resurgence with a faultless performance in defence and City captain Raheem Sterling got his 100th goal for the club with his first at Anfield since leaving in 2015.

Yet still, in City’s first win at Anfield since 2003, this day belonged to Foden.

“How thrilling Foden played four different roles against Liverpool,” was the analysis piece from The Athletic, “Phil Foden bewitches Liverpool: this is the best young player in England,” headlined Barney Ronay’s take in The Guardian, while Henry Winter in The Times went with: “Masterful Phil Foden puts Manchester City firmly in control of title race.”

Think of some of the mediocre Liverpool sides over that time, and some of the great City players. David Silva, Sergio Aguero, Yaya Toure, Kevin De Bruyne: none of those have helped inspire the club to a win at Anfield, but a 20-year-old lad from Stockport now has.

The Sheikh Mansour era at City has been defined by the club’s big-money investments in midfield, with some of the best players in the world in their positions arriving at the Etihad over the past 12 years.

You only need to look at City’s XI, lacking a traditional No.9, to see evidence of Guardiola’s abiding love of the midfielder, with six ahead of the backline.

Left-back Oleksandr Zinchenko was originally signed as a midfielder, while on the other flank Joao Cancelo looks more like a playmaker than a traditional full-back.

Even in that context, Foden stood out as his team’s most technically accomplished player.

His stunning finish for City’s fourth ensured his place in the headlines, but it was only the icing on the cake after putting in the all-round performance of a ready-made marquee £70million addition as opposed to an academy player still finding their way.

Things you love to see 👇

But his most decisive contribution came 10 minutes prior, registering the assist to put City back ahead. Only a few seconds before, Alisson had received a huge let-off for an errant short pass out from the back, but Foden wasn’t to be as forgiving.

Accepting the sudden gift by taking the ball under his control, the 20-year-old midfielder then got his head down to burst into the box, demonstrating the required close control and balance to skip past Jordan Henderson as if he weren’t there before laying on a tap-in for Gundogan.

Here are his 2⃣ costly errors against #MCFC as he handed the visitors two goals in quick succession! 😮 pic.twitter.com/xaR9Vz3dHw

He doesn’t quite have the status yet, but this was “the one man you don’t want to give it to” territory, such was the ruthless efficiency with which he exploited Alisson’s error. A perfect touch, a perfect run, a perfect pass – a moment of brutal simplicity that lived up to his Stockport Iniesta nickname.

Liverpool’s Brazilian goalkeeper was visibly rattled from then on, blushing like an Anime character after committing a similar howler a few minutes later for the visitors’ third.

Some questioned if he might have got in the way of Foden’s shot for the fourth – but could you really expect him to after being broken by Foden’s assist?

This was the kind of performance, and subsequent (entirely justified) noise, that put the City star into Wayne Rooney 2004 territory. Not since then have England boasted such a game-changing young talent.

We’re now only four months away from the Euros, with the potential of a Wembley final. Please, Phil, whatever you do, watch those metatarsals.