How Germany is reacting after World Cup exit: Surely there’s a word for this? 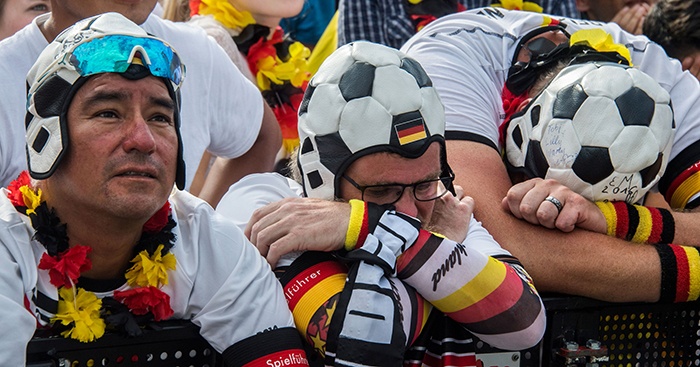 Thursday morning brought a new, unfamiliar reality to Germany: Die Mannschaft are out of the World Cup. At the group stage. At the bottom of Group F.

This has not happened for 80 years.

Front pages of the national and sporting press decried a lack of passion and cohesion. Colleagues discussing the 2-0 humbling over coffee exchanged wry smiles and shook their heads as if still not quite believing.

On a crowded tram, a mother could be overheard explaining to her son, “no, Germany aren’t playing anymore; only winners become world champions.” Germany is hurting.

As they try to digest the loss and understand just what happened, others took to the internet to savour the moment: Mexican fans thanked a team of Korean saviours; Fox Sports Brazil tweeted a classy message featuring nothing but laughter transcribed via caps lock; memes dredged up German failures in Russia from darker times, noting a lack of snow to blame.

The internet was revelling in Germany’s failure. Look to the German language to put a concise label on it: This was pure Schadenfreude.

In the land of the now previously-reigning champions, this World Cup has had a different feeling about it.

The so-called Public Viewings that became popular when Germany hosted the World Cup 12 years ago have become noticeably fewer in number. For the second game in Cologne, a crowd of only 15,000 (plus Lukas Podolski) represented the largest public viewing in Nordrhein-Westfalen, Germany’s most populous state.

Perhaps the hype may have blown over. Perhaps football fans were simply favouring the comforts of home (read: proximity to both screen and toilet facilities) and the company of friends. Some have suggested fears of terrorism perpetrated against large crowds could be keeping attendance down and costs up.

Further angst playing in the back of people’s minds could have sprung from watching Germany’s performances in friendlies against heavyweights Austria (a 2-1 loss) and Saudi Arabia (an unconvincing 2-1 win). Fans may have (rightly) worried that sharing the viewing experience with thousands could amplify the pain should things go wrong.

Those worries were cruelly validated by Javier Hernández and Hirving Lozano`s scintillating counter-attack in the opening match.

The Germans lacked invention and were ponderous throughout the tournament. Toni Kroos’ magnificent 95th minute winner against Sweden was mere paper over the cracks in a crumbling house that finally fell in stoppage time in Kazan. 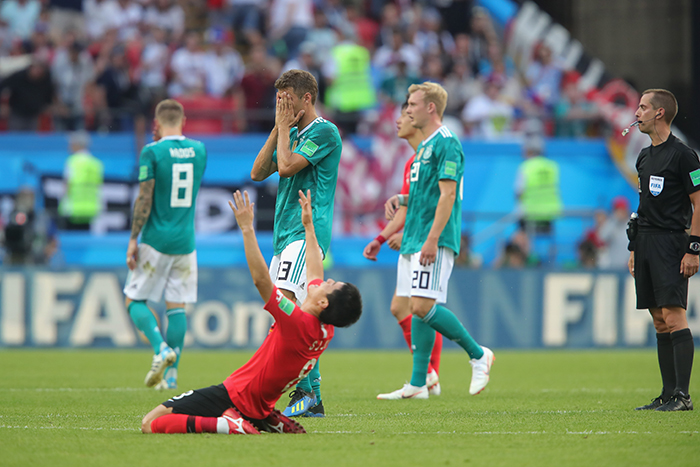 The aftermath of that defeat was a time for reflection.

“I find it really sad,” says André, a computer programmer from Cologne, still proudly wearing his 2014-vintage shirt. “I hoped Germany would progress and thought that they had a good chance to defend their title.”

He’s not alone in his disappointment and frustration, as countless photos and video clips of tears and gritted teeth can attest.

However, negative emotions aren’t enough to displace a very German directness and honesty: “They didn’t play well and deserve to be heading home.”

But now is not the time for wallowing in self-pity. “Of course not!” said André, laughing at the suggestion that he might simply stop watching now.

“There are still lots of exciting games, and I think that, in this World Cup, anything is possible; even smaller countries have a shot.”

Bottom of the group or not, Germany is still football mad. 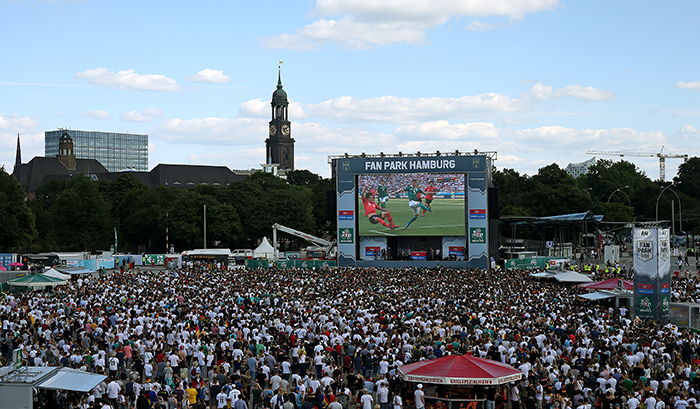 Which other countries will now enjoy German support? Reasons for picking a second favourite are as diverse as the country’s metropolises: Japanese, French, Portuguese, Spanish, English and Belgian flags hang proudly outside many bars and restaurants.

André, for one, is keeping his options open, “I’ve always liked the English game, but Belgium have been playing beautifully. I’ll know tonight.”

Appreciation for the beauty of the game is one thing, but Germans are bitterly disappointed; this was not the start to summer they had been banking on.

Millions were ready to celebrate, but instead long faces filed out of offices and bars, heading home to put flags and shirts back in the drawer earlier than expected.

If the German language could so perfectly sum up the joy others were feeling at the champions’ misery, surely there was a word to encapsulate all the feelings brought up by the teams failure. André needed only an instant to find it: Scheiße!