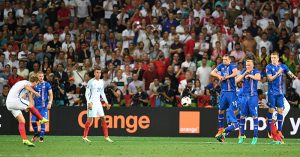 Gylfi Sigurdsson (4L-R), Kolbeinn Sigthorsson and Jon Dadi Bodvarsson of Iceland block ball shot by Harry Kane (L) during the UEFA EURO 2016 Round of 16 soccer match between England and Iceland at Stade de Nice in Nice, France, 27 June 2016. Photo: Federico Gambarini/dpa (RESTRICTIONS APPLY: For editorial news reporting purposes only. Not used for commercial or marketing purposes without prior written approval of UEFA. Images must appear as still images and must not emulate match action video footage. Photographs published in online publications (whether via the Internet or otherwise) shall have an interval of at least 20 seconds between the posting.)