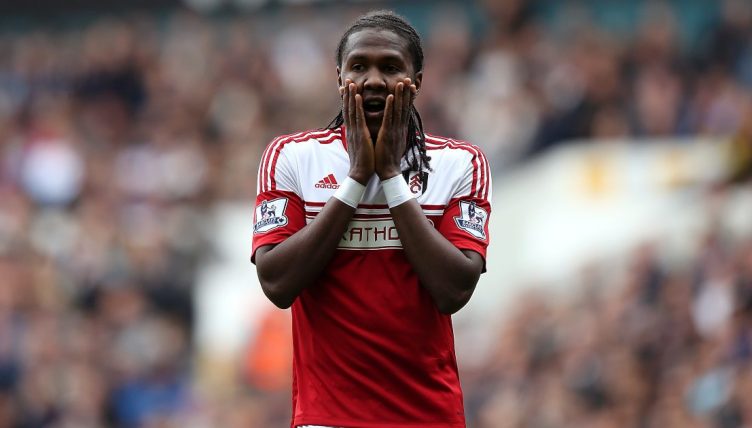 Hugo Rodallega enjoyed mixed success in England. At his best, he was scoring screamers for a rollicking Wigan Athletic side. At his worst, on the sinking ship of Rene Meulensteen’s Fulham, he looked wasteful and sulky.

Come to think of it, that ‘best’ was a very long time ago. Rodallega, signed by Wigan for £4.5 million in January 2009, was at his Premier League peak during the 2009–10 and 2010–11 seasons, when his Wigan team-mates included dinosaurs like Chris Kirkland, Titus Bramble and Mario Melchiot.

The man nicknamed ‘Hugol’ scored 19 goals over those two campaigns, making him popular in Wigan and, more excitingly, making Wigan popular in Colombia.

“Wigan have become very popular in Colombia because I’m playing here and all the matches are shown on TV,” Rodallega said in 2010. “People walk around in Wigan shirts; I have absolutely no idea where they get them from.”

However, after turning 26, the striker suffered a massive drop in form, netting just seven times in three years of Premier League football between 2011 and 2014. Truth be told, he looked off the pace by 29.

Given that he turns 36 in July, you might be surprised to hear that Rodallega is currently scoring a ton of goals for Turkish minnows Denizlispor — even though they’re bottom of the Super Lig, managed by their seventh coach in two years.

He might be older than Charles N’Zogbia (who retired five years ago), but Wigan cult hero Rodallega is somehow, in 2021, playing better than ever.

Back in June 2015, Rodallega, on the brink of turning 30, was released by Fulham after a season in the Championship.

During his Wigan heyday, the forward had been linked with a move to Arsene Wenger’s Arsenal; now it seemed the most likely destination was a move back to South America.

Indeed, just days after his Fulham contract ended, the striker was back home in Colombia, where he was expected to sign for America de Cali near his hometown. The two parties could not agree on a salary though, much to the disgruntlement of local fans.

After narrowly escaping death in a car crash, Rodallega headed straight back across the Atlantic — to the surprise of many — to sign for Turkish Super Lig side Akhisarspor, who had recently enjoyed three promotions in five years.

Not that the striker had been following developments. “To be honest, I don’t know much about Akhisar, nor about the league,” he said.

He did, however, express his excitement about playing against Nani, Robin van Persie, Wesley Sneijder and Ricardo Quaresma — big names in world football with plenty left to play for despite their advancing years.

But then something strange happened. Rodallega, who had just been playing second fiddle to Ross McCormack in the Championship, outperformed all of those household names, scoring 19 league goals in his debut campaign.

The only players to beat him were Samuel Eto’o, with 20 goals, and Mario Gomez, with 26, both of whom were certified goal machines. Had the misfit forward found the perfect home?

After a season and a half at Akhisarspor, the 31-year-old made the step up to a bigger Super Lig side, Trabzonspor, who paid £1.5million to sign him in January 2017.

There he spent two and a half seasons, saving his best form for his final campaign, where his 15 goals helped the club qualify for the Europa League.

With two standout goalscoring seasons in four years, Rodallega had massively enhanced his reputation while playing in Turkey — and continues to build upon it today.

When his Trabzonspor contract expired in the summer of 2019, there were further rumours of a return to Colombia. Again, however, nothing materialised, and Trabzonspor president Ahmet Agaoglu, sounding somewhat embittered, said Rodallega’s wage demands were too high.

“He had thought about playing in his home country, but he did not see the figures that we offered him,” Agaoglu said. “Frankly, I don’t think there is any club that can afford Hugo right now.”

In the end, it was Denizlispor, another Turkish Super Lig club, who decided that Rodallega was still a worthy investment. More than that, the newly promoted club made the 34-year-old their new captain — something Rene Meulensteen may not have foreseen or endorsed.

Despite two years of turmoil at the club, Rodallega has scored some brilliant goals and, at 35, is as good as he’s ever been.

During the pandemic-interrupted 2019–20 season, Rodallega managed a modest total of six league goals, the last of which was a spectacular though evidently mishit cross.

This season, however, the veteran has been at his best, scoring 14 goals despite Denizlispor going through managers like pie barms. With four games left, he could still just about equal his best ever tally.

And he’s scoring with quality, not just quantity. His first of the campaign, against Genclerbirligi in October, was one of the best goals of his career: a 30-yard drive into the top right corner, celebrated with due bravado.

Some of the others haven’t been bad either. A lovely slalom against BB Erzurumspor in December showcased the Colombian’s guile and two-footedness, while his dummy and chip against Sivasspor in January looked like the handiwork of someone 10 years younger.

Of course, there’s a danger that the Rodallega’s impressive evolution may be overshadowed by the fact his club are dead last in the Super Lig and heading for relegation, having not won a game since early March.

But for those of us who remember the forward’s early promise at Wigan followed by steady decline then total collapse — his first start of Fulham’s horrible 2013–14 season was a 6-0 defeat to Hull City — this late-career rejuvenation in Turkey seems nothing short of remarkable.

Rodallega has confirmed he will leave his struggling club this summer, and he may finally decide to return to Colombia.

Fans over there have had to wait a long time, but they shouldn’t be angry: they’ll be getting a better version of Rodallega than the one we saw in England.