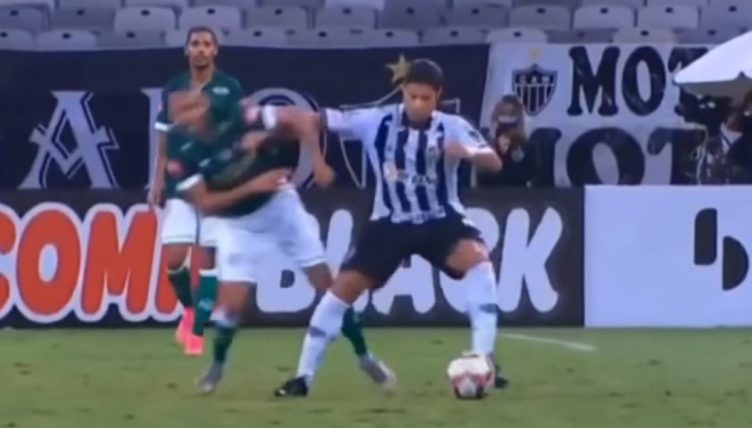 Hulk has returned. No, don’t worry, not the big green one. 794 films with the same storyline is enough already, Marvel.

We’re talking about the Brazilian footballer with the upper body of his cartoon namesake and a left foot like the proverbial Partridge traction engine.

Hulk’s 34 now, believe it or not, and he’s back in his homeland after pocketing millions in Russia and China, ready for a last hurrah – and a shot at some more silverware – with Belo Horizonte-based side Atletico Mineiro.

More importantly than any shiny pots though, he’s back giving Brazilian defenders a taste of what they have (not really) been missing since he moved to Kawasaki Frontale from his first club Vitoria back in 2005.

On Sunday, Hulk made his debut for his new side against Uberlandia in the Minas Gerais state championship and, as well as setting up Diego Tardelli for the fourth, he was ready to remind anyone who’d forgotten of his rather significant physical presence.

Halfway through the second half, he picked the ball up in the opposition half, with pressure being applied by Uberlandia midfielder Franco de Paul Ferreira.

The ex-Porto and Brazil attacker set himself and stuck out a right arm, sending Ferreira flying so far across the pitch that he pretty much disappeared from the camera shot focusing on the pair.

If it’s a sign of what’s to come, then defenders and midfielders across the Brazilian nation will be heading to the gym and guzzling protein shakes in an attempt to bulk up a bit before they face him.

It will, though, be in vain. Nobody outmuscles Hulk.

Alongside old-timers Hulk and Tardelli, Atletico have brought in a raft of talented (and expensive) supporting cast members like young attacker Marrony, right-back Mariano, midfielder Matias Zaracho and left-back Dodo. They will be hoping for big things this season.

The Minas Gerais state league should be fairly easy pickings, but supporters will be looking beyond that, believing it possible to challenge Flamengo’s dominance in the domestic league and take Palmeiras’ Copa Libertadores crown.

Nutty professor Jorge Sampaoli may have recently deserted the club in favour of Marseille, but they have brought in Cuca, who led Atletico to their last Libertadores title in 2012 and managed Santos to the continental final in January 2021.

It is the sort of investment that many a Brazilian club has seen come back to bite them on the backside when unserviceable debts pile up. But this season promises to be a wild ride for Galo fans.