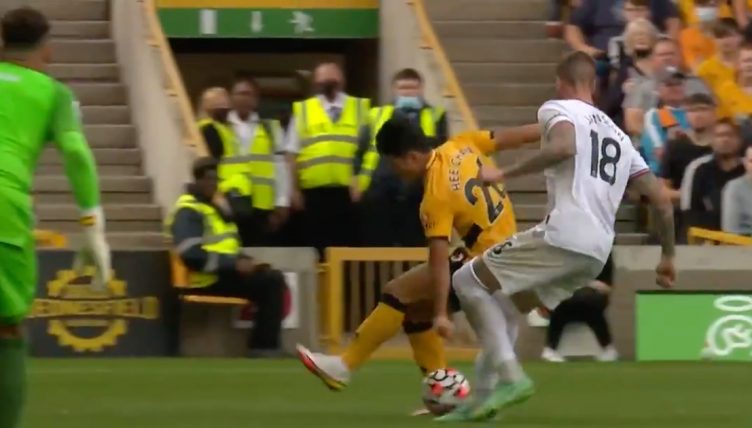 Wolves may have come up empty-handed against Brentford, but Hwang Hee-Chan is beginning to show his quality.

By the end of the meeting with the Bees, Bruno Lage had decided to forego any sense of traditional formations and throw on all his attacking players – a move which, while we can’t entirely make sense of it, we can definitely respect at a base level.

Did it work? Absolutely not. Not only did Wolves fail to score, but they failed to register a single shot on target in the entire match, and yet the approach – and one moment from Hwang in particular – meant it was a lot of fun for the neutral.

While Hwang struggled for goals in his first season in Germany with RB Leipzig, prompting his loan move to Molineux, he was also part of the thrilling Red Bull Salzburg side which famously came back from 3-0 down at Anfield in 2019, scoring the first of the visitors’ goals.

He’s a player who we have seen have a lot of fun going forward, and even a couple of cameos off the bench have allowed him to show as much.

There was the run-out away at Watford, when he scored the easiest goal anyone will put away in the Premier League this season. And then, against Brentford, he took one look at Pontus Jansson and did this.

The nutmeg as a concept is entry-level showboating. Doing it on the run is phase two. It goes up another notch when you play it through the defender’s legs with your heel. And when that defender is Pontus Jansson, you’ve got yourself a full house.

Hwang has walked into the prison yard and punched the biggest guy straight in the jaw. However, said guy has taken a couple of seconds to figure out what’s going on, and taken a couple of extra steps before collapsing to the ground.

Jansson is like Wile E. Coyote running off the edge of a cliff-face while chasing the Road Runner. He’s just carried on like everything is normal, barely breaking a stride as he turns to attempt to recover the ball, but you still get the feeling that reminding him of what has actually happened would be enough for the move to have the intended effect and send him crashing to earth in a fit of shrunken pride.

At some point after the next international break, with Brentford playing a random league match and nothing much happening, Jansson will randomly go to ground with no obvious explanation. Commentators will be at a loss, and his team-mates will look confused. But we’ll know all that’s happening is the cogs are turning in his head, finally reaching the point where the nerve endings wake up and tell him ‘wait, did that guy just nutmeg me?’.

Liverpool and Salzburg put on a 𝒔𝒉𝒐𝒘 last time out..pic.twitter.com/GuQc63TgMk

Will that end up being one of the highlights of Hwang’s time of Wolves? We certainly hope not.

At some point this season, Lage might feel the need to focus on things like ‘winning football matches’ and ‘making sure his team picks up enough points to keep him in a job’ – very short-sighted thinking, as we’re sure you’ll agree.

When we look back on the campaign, we won’t remember who picked up three points on a random Saturday in September, and we’re glad for that fact. Football might be about results in the short term, but our longer-lasting memories of football are all about moments. Thank you, Hwang Hee-Chan, for giving us something we’ll always be able to look back on.