A while ago, I came across an interview on ESPN Brasil with ex-Arsenal full-back André Santos, whose spell in the Premier League was certainly memorable, albeit not necessarily for the right reasons.

He always seemed most interested in entertaining himself whilst playing, marauding down the left flank with the reckless abandon of someone having a kick about on the park near the Emirates rather than fulfilling his duties as a supposedly elite professional inside it.

In addition to his manic performances on the pitch, there was the half-time shirt-swapping incident with the recently-departed Robin van Persie and the speeding charge that led to Arsenal fans serenading him with the lines, “André Santos, he drives how he wants.”

When he was sold to Flamengo in 2013, there weren’t too many tears in Gooners’ eyes.

It was unsurprising, then, to discover that after his spell in North London he had struggled to remain at the top level. A season with Flamengo was followed by contracts in India and the second divisions of Switzerland and Turkey.

The real intrigue in the interview, though, lay in the revelation that he was carefully planning for his post-football career by opening a restaurant in São Paulo, the city where I reside.

He’s not the only high-profile player to move into the food business – but the picture he painted was irresistible.

Flavours.sp, he said, is “small, sort of vintage”, before going on to extoll the virtues of the eclectic offerings: “We serve wraps, gourmet hamburgers, unusual sushis with special sauces, as well as ceviche.”

“The food and the sauces are excellent”, he insisted, in case that delectable selection hadn’t got you salivating already.

A quick perusal of the Flavours.sp Instagram reveals a slew of current and ex-stars of Brazil’s beautiful game, interspersed with photos of André’s epicurean delights.

Gabriel Jesus is there with a slightly pained expression, as is Seleção player turned ultra-opinionated daytime TV presenter Neto. Vagner Love and Diego Lugano also pop up and are joined by some synthetic-looking pop star and Instagram influencer types.

The tagline in the profile picture seals the deal: “Taste our #FoodPorn”.

I’m convinced. André Santos’ excellent sauces: a gastronomic opportunity that nobody in their right mind could forego.

Situated in Moema, the sort of affluent São Paulo neighbourhood where residents’ monthly dog-grooming bills are higher than the average Brazilian’s monthly earnings, Santos’ emporium looks as coherent as the combination of #FoodPorn which he had described in the interview.

There are lots of white tiles, yellow wooden chairs, neon signs and a wall covered in a piss-poor imitation of the work of famous Brazilian graffitist Kobra. Hydraulically-retractable iron window grates complete the seedy Mexican motel/maximum-security prison chic they were aiming for.

Hopefully, I think, the food will be nicer than the décor.

As we sit down, the affable waiter insists we try the house special with the same fervency as the establishment’s owner tried to sabotage Arsenal’s chances of Champions League football.

According to the ridiculously extensive menu, the dish, Uramaki Miami, consists of, “A [sushi] roll of crispy salmon in breadcrumbs, covered with blowtorched buffalo mozzarella, bacon bits and special sauce.”

First, though, we are treated to the starter. A deep, rectangular white plate arrives with five lumps of raw salmon – a poached quails egg glued on top of each with wasabi mayo – plonked on a mound of grated radish, floating in about half a litre of soy sauce. The restaurant is on a hill. All the soy sauce gathers at one end of the plate. 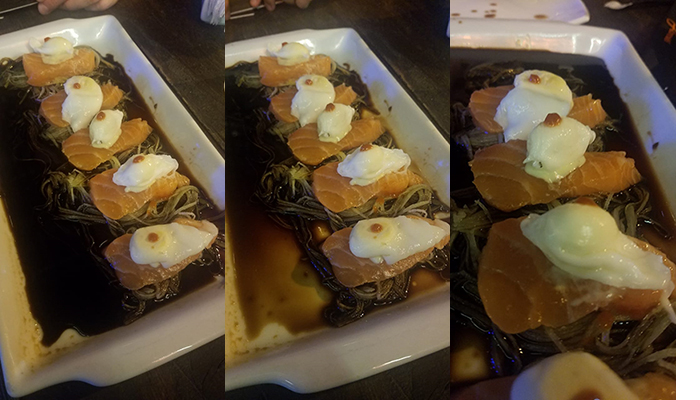 The little dots of sweet chilli on the eggs do little to make it look more appetising, but I stick one in my mouth anyway. As I chew and chew and try to swallow, we notice an ant – prostrate and with a look of intense suffering on its face – poached securely into the side of one of the eggs.

The manager hears us point it out and whispers at the waiter not to talk about it too loudly.

At this point I realise that, of the other customers in the restaurant, only one table is actually eating. One next to us has ordered drinks, another has a plate of food in front of them which looks untouched.

Unfazed, we keep our focus on the task at hand; I mean how could you resist that Miami thing he so passionately endorsed?

It comes and it’s clear they really mean business with this special sauce. Lashings would be an understatement. The hare-brained mixture of wasabi mayo, sriracha chilli, and sweet, salty, gloopy tare covers everything. 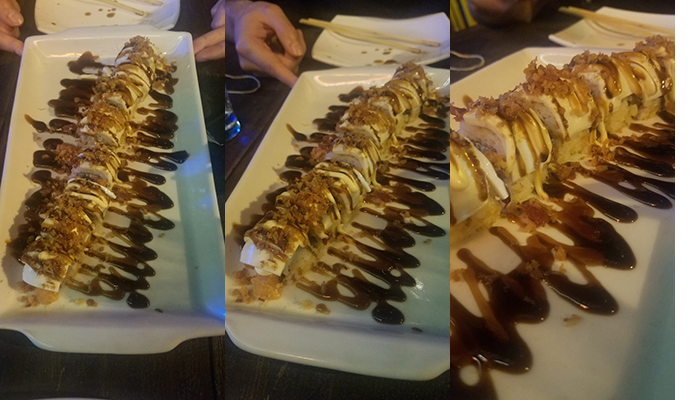 The “buffalo mozzarella” instead turns out to be those plasticky cheese squares; the bacon bits are, well, bacon bits, and hidden under all this is some fish that may or may not be salmon and may or may not have been crispy at some point.

I struggle through a few slices, poke what’s left on the plate and ponder the thought process that led to this concoction. I want to finish it, but my hatred of food waste is overpowered by the disgusting prospect of bacon bits floating in Santos’ sauces.

As it can’t get any worse, we persist, and the next dish soon arrives.

Described as a ‘Sushi Burrito’, it is another rice roll, this time thicker and uncooked, stuffed with more crispy salmon, some raw salmon, cream cheese, sweet chilli sauce, red onion, spring onion and… wait for it… Doritos.

Fuck. At least there’s no special sauce, I suppose.

It’s cold; like really, properly, been-in-the-fridge-for-a-week cold. The green seaweed stuff that holds the ‘burrito’ together has the texture of a car tyre. The Doritos (Cool Original, in case you were wondering) have long since gone soggy, saturated in the sweet chilli sauce. 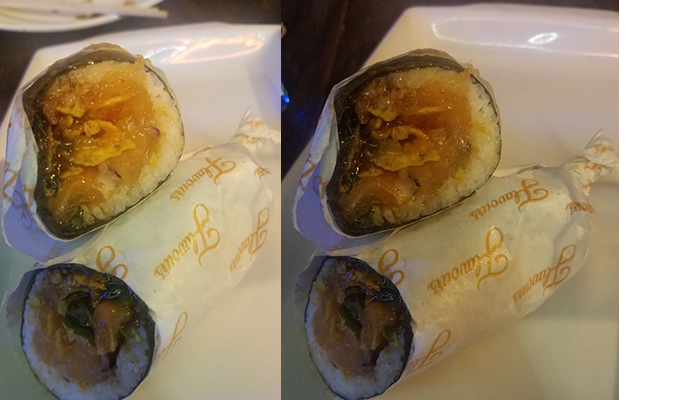 The waiter asks if we are enjoying it and we point out the texture of the seaweed rather than any of the other defects. “The sauce makes it go a bit rubbery like that”, he says.

Santos, who topped off his career by getting a doping ban whilst playing for a Brazilian third-tier side, is obviously as committed to the culinary arts as he was to the art of defending.

One more creation is served – a temaki. For the uninitiated, a temaki is like a flake 99. But instead of the cone, there is that green seaweed paper; in place of ice cream, there is rice; where the flake would be, there is fish; and instead of strawberry sauce and hundreds and thousands, there is cream cheese and spring onion.

In this instance, the fish is deep-fried prawns, and there is more – a lot more – special fucking sauce. To make it things even more special, the viscous pap is now infused with a dash of American mustard. 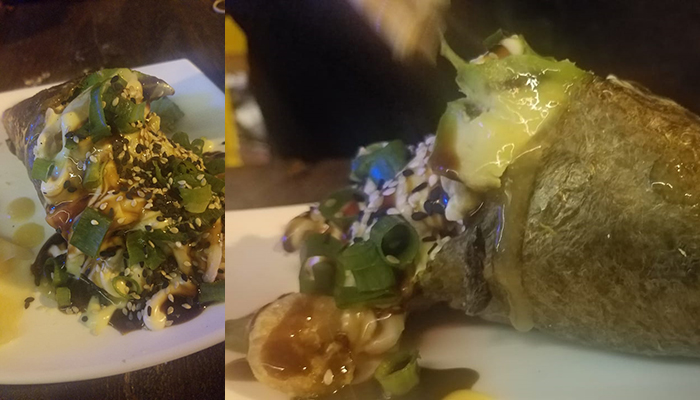 Once again, my waste not, want not disposition is quickly outweighed by my desire to vomit on the table.

All the while, the manager has been glancing at us anxiously from the other side of the room, then pretending to do something else when we look across.

We ask for the bill.

The waiter looks utterly baffled by the concept of paying with paper rather than plastic and gives us our change in the Brazilian equivalent of 2p, 5p and 10p coins.

As we walk away, the question in my head is not ‘why?’ but ‘how?’. How do they survive? How do they get so many people to write positive reviews on Google? How the fuck can anyone finish a plate full of that stuff?

But then I realise that they don’t, and it doesn’t matter.

He’s opened a restaurant for footballers and footballers’ wives, B-list pop stars and people who make a living putting photos on the internet. People who have loads of money, like to be seen out, but, as a result of their profession, aren’t allowed to eat.

And now he’s conned us into giving him money for raw salmon and Doritos.

André Santos is a fucking genius.