If England can’t always be the best, at least they can be the weirdest 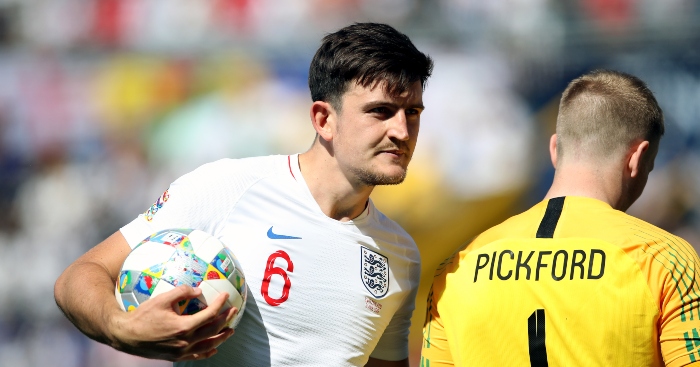 After Sam Allardyce was caught out, among other things, drinking a pint of wine, Southgate was the obvious easy choice for the FA. A company man. A Steady Eddie.

He had an underwhelming record as a club manager and an uninspiring record as Under-21 boss. He wore a waistcoat. He was perfect.

It’s hard to make sense of everything that’s happened since.

Under Southgate’s New Football Man guidance, England reached the semi-finals of the 2018 World Cup by mastering the Allardycian principles of set-piece solidity while playing a continental three at the back formation.

Following that tournament, he has revamped the side with a number of promising young players, who have helped England play some genuinely excellent football at times, notably beating Spain and Croatia in actual exciting international fixtures on their way to reaching the Nations League semi-finals.

Even in fairly tepid clashes with the Netherlands and Switzerland, England have managed to be interesting, with a Monty Python-esque surrealism at the heart of it all.

It starts at the back with Jordan Pickford, a goalkeeper who at times seems to be playing a character of a Sunderland fan who has somehow ended up as England’s No.1, like an unused plotline from Mike Bassett.

In these Nations League finals he has caught the eye with some fine saves, forced commentators to sheepishly apologise to the viewers after microphones picked him up calling a linesman a “useless c*nt” and become England’s penalty shootout hero for a second consecutive summer – converting his own spot-kick with aplomb against Switzerland before crucially saving from Josip Drmic.

Pickford wasn’t even aware he would be in line to take a penalty until the final whistle was blown. “The gaffer in extra-time went ‘number five’, and I went ‘oh wow’,” he said afterwards. “I’m not a normal penalty taker, but I just relaxed and trusted my ability.”

In front of Pickford, while one of Pep Guardiola’s £50million Manchester City robots in John Stones has a nervous breakdown, England’s new cult hero comes in the shape of Harry Maguire, a man who to date still has more appearances in League One to his name than the Premier League.

Maguire marauds forward with all the grace of a giraffe on acid, yet it’s impossible to argue it’s not incredibly effective. Against Switzerland, he pulled off one daring turn in almost the exact same position that cost Stones so dearly against the Netherlands.

When Maguire stepped up to take England’s first penalty in the shootout, there was half an expectation he could be the first footballer to convert a spot-kick with his head.

The Leicester City defender was the only member of England’s back four to keep his place against Switzerland following the 3-1 defeat to the Netherlands in the semi-final, and Southgate made some curious choices around him during the clash with Xherdan Shaqiri and co.

Trent Alexander-Arnold, who has suddenly become England’s most creative player, started at right-back with Danny Rose on the opposite flank. But when Rose came off after 70 minutes, Southgate opted for another right-back in Kyle Walker to take his place.

For the rest of the game the Three Lions then deployed the unconventional tactic of swapping their full-backs over on a number of occasions, as if they suddenly had a defence containing Arjen Robben and Damien Duff in their Chelsea pomp.

Southgate himself will struggle to make sense of England’s attack in these two games, as the team that put Spain to the sword and hit five in consecutive games against the Czech Republic and Montenegro suddenly banged its head against a wall for 240 minutes, scoring only from the spot.

The one piece of genuinely brilliant play they strung together resulted in Jesse Lingard’s ‘winner’ against the Netherlands, but VAR ultimately overturned that and similarly left England frustrated after Callum Wilson seemed to have broken the deadlock against Switzerland.

“I’d rather have lucky generals than good ones,” Napoleon Bonaparte supposedly once said. But if you can’t be lucky either, being weird ensures you at least have some fun.