Whenever a young, exciting English footballer bursts onto the scene, there’s a temptation to indulge his every move and run the risk of overstating his excellence.

Let me begin by saying this is absolutely the right thing to do on every single occasion.

Jadon Sancho might not end up having the career many of us expect from him, but that’s no reason to wait and see whether he hits those heights.

Especially when – even in flashes of first-team action for Borussia Dortmund – he’s doing things like this.

As the England international begins his run, you can see Freiburg’s Lucas Höler in two minds.

His head tells him Sancho needs to be stopped, but his heart is screaming that he is not the man to do it.

Backing off and letting Sancho embarrass his team-mates is the smartest thing Höler will do in his career, followed by the dumbest, as he talks himself into going back in for a nibble.

It’s as if he’s donned safety goggles while cooking a fry-up to prevent the hot oil from getting near his eyes, only to dive straight in and try to pick up the boiling pan without using the handle.

Once Sancho escapes the clutches of the Freiburg No.9, he has clear air in front of him, yet the eagle-eyed among you are probably getting ready to point out there was just as much real estate at his disposal before a single opposition player entered the picture.

Some might criticise his decision to come inside and beat three men only to end up in a position not all that much better than the one in which he started. While not wanting to cast aspersions on the character of strangers, these people are both wrong and bad. 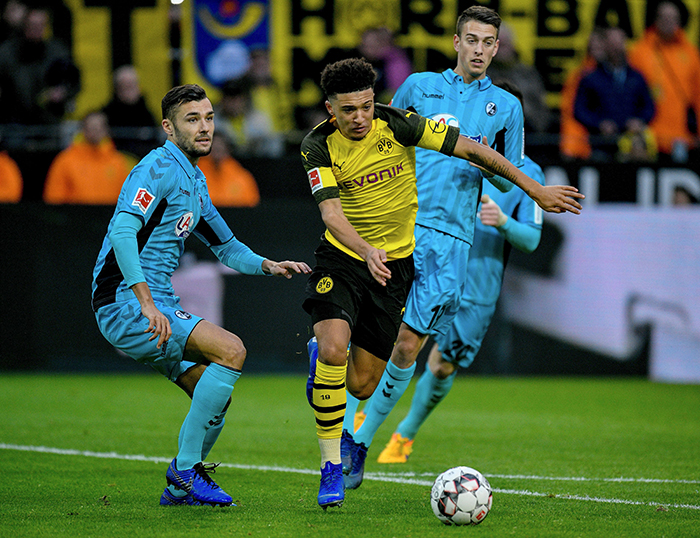 The two others who approach Sancho go into it with the best of intentions.

They know the game is lost, with their team facing a two-goal deficit entering stoppage time, but they’re in no mood to throw in the towel.

Perhaps, though, they should have been.

Sancho doesn’t dance around them as much as he coaxes them to part around him, leaving the pair facing in opposite directions with his speed of movement.

It’s as if he has sent his opponents off on a scavenger hunt where one of the tasks requires them to find an item which doesn’t exist: he does enough to make them think they know where to begin, and by the time they realise the impossibility of their task he has sped into the distance, spelling out “so long, suckers” with his feet.

Was the second pirouette necessary? Absolutely, both in proving the first was no fluke and in demonstrating he makes the rules. Any suggestion that he can be stopped by normal means disappears in a heartbeat.

Sending out a warning

Not only that, but others will see the mincemeat he made of Freiburg – in fact they’ll see it over and over for a week or more.

It’s bad enough trying to contend with someone who sets out to keep your defence on the back foot without throwing in a desire to embarrass you on the way to achieving the feat.

We’ve seen enough from Roberto Firmino to know there’s nothing more satisfying than schooling an opponent while literally looking the other way, and Sancho’s pirouettes let him go from staring down Freiburg to forcing them to look at the name on the back of his shirt as he becomes little more than a blur.

Jadon Sancho tore it up against Freiburg 🙌

He's having the time of his life at Dortmund 💛🖤 pic.twitter.com/0sSIAh9eC7

Time and time again, both this season and last, Sancho has treated defenders as if they’re guests in his own house.

However prepared they are, however much they might think they know about what to expect, he will be in control and only let them settle when it suits him for others to feel at ease.

Want to step to him on his own territory? Fine, but be aware of the risks and know he’s prepared for this scenario much better than you could ever be capable of.

If you’re wondering why he steps up to the plate as if he knows he’ll leave you flailing and baffled, it’s because he does know.

Not knowing how to react is your first mistake; not knowing that he will know is your second.

No player has more assists than Sancho in the Bundesliga this season, despite six of his 13 appearances coming from the bench, and he feels he can run the show whether he gets nine minutes of 90.

The exasperation of the Freiburg defence is exactly why you don’t even let someone like Sancho think he can get at you.

However, in his case, there is every chance he’d have no trouble sensing the panic before even stepping onto the pitch, like a dog sniffing out the fear of a rookie postman as he enters the front yard.

The most terrifying thing about all of this, though, is that he is still just 18 years of age.

This is just the beginning.