If Lamela was the north London derby’s joker, Gabriel Magalhaes was its ace 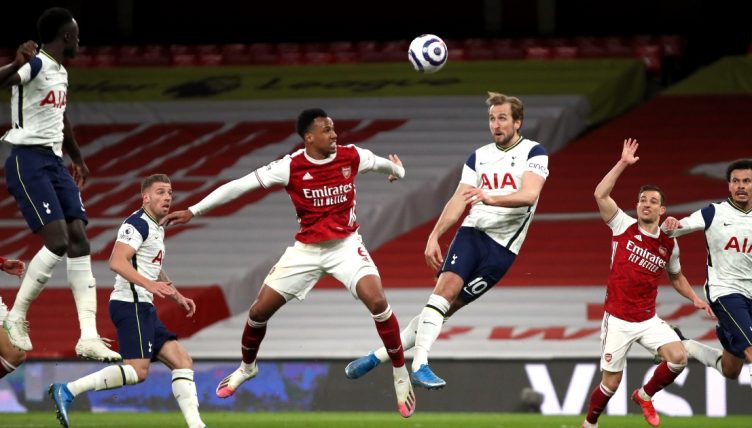 No player has scored more goals in north London derbies than Harry Kane, but in the latest clash between Arsenal and Tottenham, he was kept in Gabriel Magalhaes’ pocket.

Gabriel hasn’t been flawless in his debut season with the Gunners, and in recent weeks has had to make do with watching their Premier League campaign from the bench, making do with opportunities in the Europa League.

When the Brazilian arrived from Lille for a reported £27million fee last summer amid plenty of hype, he probably wasn’t expecting to find himself watching Rob Holding and Pablo Mari from the stands.

But in his first Premier League appearance in a month, he put in the kind of performance that demonstrated that the 23-year-old centre-half could feature at the heart of Arsenal’s backline for years to come.

Slotting in alongside compatriot David Luiz, the two Brazilians were instrumental in bringing Mikel Arteta’s gameplan to life, playing it out from the back and taking the game to the visitors, gladly obliging as Jose Mourinho appeared to be asking them to.

The two, along with Granit Xhaka, who so often would be the one receiving the ball from them in midfield, came out on top when it came to the progressive distance of their passing, playing it over 800 yards towards the opposition goal between them – over 250 yards more than Spurs’ two centre-halves (via FBref.com).

Being comfortable on the ball was only half the story, though. Gabriel seems to revel in the nitty-gritty of actually defending, in a Tony Adams, body-on-the-line kind of way.

Either scoring or assisting all four of Spurs’ goals in last weekend’s 4-1 mauling of Crystal Palace, taking his tally to 16 goals and 13 assists in the Premier League this season, Kane was looking in ominous form coming into a fixture he so often defines.

Gabriel welcomed the challenge, staying on Kane like a hawk on the rare occasions that Spurs got the ball up to the striker. The defender did so without getting his knees dirty, as the only outfield member of Arsenal’s starting XI that didn’t even attempt a tackle – because he never needed to.

It was only from a ridiculous moment of inspiration from Erik Lamela that the Gunners’ backline was breached, whereby Gabriel was elsewhere, carrying out his job by staying on Tottenham’s talisman.

The man-marking job evidently got to Kane, who arrived late for a challenge and left one on the Brazilian, smashing him with a shoulder charge late on.

Kane taking revenge on Gabriel after being pocketed all game. Disgraceful pic.twitter.com/NP7i5flZXk

Borne out of pure frustration, it was a challenge that told you everything about whose derby it was. And whose it wasn’t.

Kane did eventually have some moments after Alexandre Lacazette’s penalty and Lamela’s sending off seemed to stir something in his side. It took until the 80th minute, but the visitors finally put Arteta’s side under some sustained pressure.

They came closest in the 89th minute, with Kane doing well to whip in free-kick in underneath Arsenal’s wall and above their ‘draft excluder’ Cedric Soares. Bernd Leno was beaten, but the strike found its way back out off the post.

Davinson Sanchez arrived at the penalty spot to send the rebound goalward, but – as he was always seemed to be – Gabriel was in the right place at the right time, with a match-saving headed block.

It was a header at the other end, putting Arsenal back ahead in Thursday evening’s 3-1 Europa League win at Olympiakos with an astonishingly springy far-post leap, that might have convinced Arteta to stick Gabriel back in.

And once again the defender came up with a match-winning header, capping off a near-perfect individual display at the back.

Where Lamela turned out to be the north London derby’s joker in the pack, Gabriel was its ace.