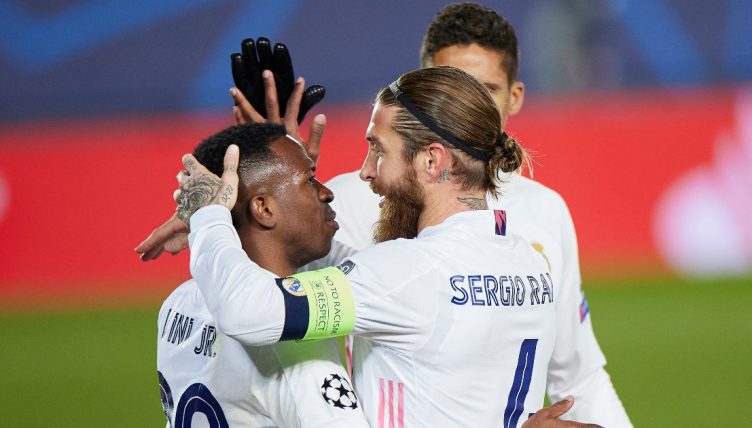 Sergio Ramos’ reaction was the proverbial 1000-word picture. He bent over, head in hands, before slumping to the floor and throwing his arms in the air, anguish and frustration writ across his face.

Real Madrid were 1-0 up on the night and 3-0 up on aggregate in their Champions League last-16 tie with Atalanta. Another goal would see them through to the quarter-finals for sure.

Then the moment to seal it came. Vinicius Jr picked the ball up in his own half, knocked it around one side of Ruslan Malinovskiy, ran round the other – a skill they call the ‘half moon’ back in Brazil – and set off.

A swift one-two with Ferland Mendy set him in behind most of the Italian side’s advanced backline, with just one defender and the ‘keeper still to beat. He feinted right and left, a drop of the shoulder and swing of the hips that Ronaldo Fenomeno would have been proud of, then cut inside onto his stronger right foot.

He was closing down on the ‘keeper now, almost inside the six-yard box, the goal gaping and… oh. Oh, Vinicius. A poke with the outside of his boot sent the ball trickling sheepishly past the post.

Vinicius Jr did everything right, and was so close to an all-time great #UCL goal, until…

Ramos despaired. As did his manager Zinedine Zidane, one imagines. Vinicius clung to the inside of the empty net and looked like he wanted the ground to swallow him up. “Caralho,” he said – fuck. His sentiment was echoed by everyone watching at home.

It wasn’t the first time he had frustrated his team-mates on the night, either. In the first half, Karim Benzema had twice been seen throwing his arms out huffily – first as Vinicius missed a chance Benzema had set up for him, then as Vinicius forewent an opportunity to cut the ball back when the French striker was well-positioned in the middle of the box.

But it was this third spurned opening that rankled most. He had done everything, everything, but the most simple thing; to poke the ball inside rather than outside the post. Earlier in the week, he had told El Pais: “Dribbling past a defender is easier for me than scoring a goal.” Oh, Vinicius.

Immediately and inevitably, the meme brigade warmed up their laptops and smartphones, gleefully rubbing their hands at the opportunity for hilarious jokes at his expense.

we need to implement this when fans are allowed back in the stadium so that vinicius can score pic.twitter.com/1RPVZl7E6o

It was easy and a guarantee of loads of likes and interaction. Not only did the miss look bad, but it summed up a lot of Vinicius’ Madrid career so far – brilliant pace, brilliant skill, poor end product.

That is the image he has cultivated, a player who cannot produce the interventions that truly affect games; his record of four goals and three assists in 33 games this season testament to that.

Yet instead of focusing on what Vincius can’t do, we should perhaps enjoy the powers he has; his ability to make his fellow professionals look like they’re running through treacle, his capacity to sit baffled defenders on their backsides. That’s certainly what he did on the night.

Unfazed by the miss, he picked up the ball moments later, dribbled straight at the Atalanta backline, causing more disarray, and won a penalty that Ramos – the face of frustration a few minutes prior – happily tucked into the bottom corner.

Sergio Ramos makes it 2-0 from the penalty spot for Real Madrid and they're surely out of sight now! ⚽

Their talismanic captain always turns up on the big nights 💥 pic.twitter.com/3WWh2HMAPE

When Madrid paid Flamengo €50million to bring Vinicius to Europe, they knew what they were getting. Spectacular acceleration, mesmerising dribbling, directness and ability – but all of it raw, the edges unsmoothed.

Zidane clearly knows that what Vincius has, even with those imperfections, is invaluable to the team. As he did with the miss, Vinicius alone can drag Madrid 80 yards up the field. Zidane has plenty of other options in his squad but chose Vincius for this game.

And his team-mates’ faces of frustration are as much compliment as insult. If they thought Vinicius was useless, they would not react with such emotion. It is because they know how spectacularly effective he could be if he added a little more final product that they despair.

The way they celebrated Ramos’ penalty goal with Vincius as much as the man who converted the kick showed how Madrid’s players feel.

And let’s not forget, he’s still only 20. Footballers are not immutable, their abilities and competencies are not fixed from the start of their careers to the end. In the season he turned 20, Cristiano Ronaldo scored nine goals in 50 games.

Vinicius still has time to add things to his game and to sharpen that rough cutting edge. But for now, let’s just enjoy him for the destabilising, chaotic wonderfulness he does bring.