If you need a reason to watch the MLS Cup, Nico Lodeiro is that reason 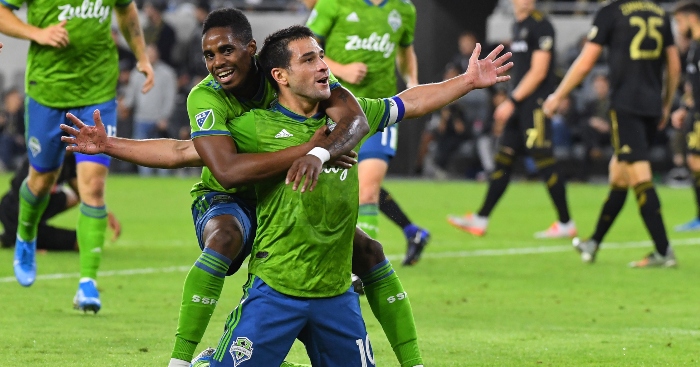 The last two times Seattle Sounders made it to MLS Cup, they lacked a cutting edge. If that is to change in 2019, Nico Lodeiro will need to bring his A-game.

The west coast team recorded just two shots on target across 210 minutes against Toronto FC in 2016 and 2017, and while they won the first of those meetings (a penalty shoot-out after a goalless draw where goalkeeper Stefan Frei kept them in the game), they’ll hope to be able to do things differently this time around.

As luck would have it, they’re up against the same opponents for a third time after stunning Carlos Vela and Los Angeles FC in the Western Conference final. Lodeiro has been on fire for years, but now it’s time for him to do it on the biggest stage.

You can almost forgive Lodeiro for not leaving everything on the pitch, given what happened the first time he was given a big stage on which to impress.

At 21, he was the youngest member of Uruguay’s squad for the 2010 World Cup after impressing for Nacional and earning a move to Ajax, and was thrown on for Nacho González in an effort to help break the deadlock in the opening group game against France.

However, just 18 minutes later his day was done thanks to two yellow cards. He was restricted to just two more appearances, both from the bench, and missed out on the semi-final and third-place playoff altogether. Worse still, he picked up an injury in South Africa which kept him out of the entire 2010-11 season and more or less put paid to his hopes of a long and healthy career in Amsterdam.

There were some high points over the next few years as he moved around South America, but none of his clubs in Brazil and Argentina really felt like home in the same way as Seattle does.

Not just the best player

“When your DP [Designated Player] – the guy who’s your best player – is your hardest worker, that sets a tone that nobody else can replicate,” Sounders General Manager Garth Lagerway said.

The wage disparity in MLS, with DPs often earning significantly more than regular squad players, might theoretically cause problems in the competition. However, where Lodeiro is concerned, this has not been an issue.

Part of this comes from the fact that he’s not the kind of player who will dominate attacks to the point he has to be the man on the end of them. Instead, his best work involves getting the most out of those around him, be it due to his tireless work off the ball or his creativity with it at his feet.

Part of his brilliance comes from manipulating opponents into thinking they’re in control just enough to leave a gap for Raúl Ruidiíaz, Jordan Morris or whichever other member of his supporting cast is there to capitalise.

Back in June 2018, Víctor Rodríguez was the man in position to capitalise as Lodeiro cut in from the right and swung in the sort of cross that will leave defenders swearing at you, each other and, most crucially, themselves. You can’t even accuse him of putting the ball into the corridor of uncertainty, as there’s absolutely zero doubt about the end result.

In 101 regular-season games for the Sounders, Lodeiro has 48 assists. To put that into context, Sebastian Giovinco – one of the stars of MLS in recent years – finished with 52 from 11 games, while David Beckham ended with 40 in his 98 LA Galaxy appearances.

It’s not just about assists, though – he has 26 goals in those games, and a further six in 17 post-season matches, including a belter in this season’s playoff win over Real Salt Lake.

The idea of players making difficult things look simple has been played out, but there’s still something to be said for making a goal look like a foregone conclusion before you have even received the pass from your team-mate.

Lodeiro’s go-ahead goal against LAFC might have been the more crucial in Seattle’s run to MLS Cup, but the strike against RSL paints a better portrait of the man.

You want the ball in a certain place? He’ll put it there, and make it look pretty when it happens, but he’ll also do the hard running to get into a spot where both he and you can make a difference.

When asked about Lodeiro’s qualities, the simplicity of Morris’ answer says it all.

“He just puts it on your foot, he makes it easy for you.”

A lot of the time, that’s all you really need.