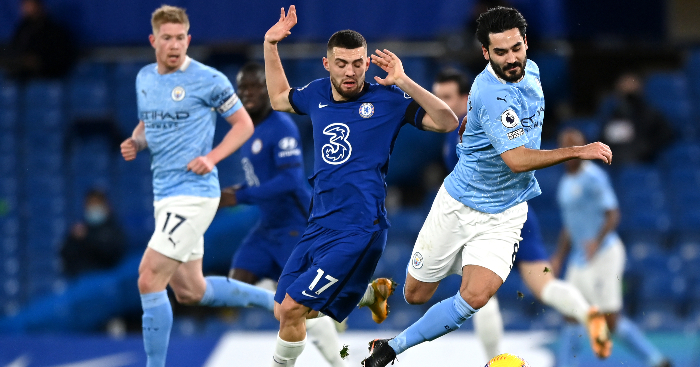 Manchester City‘s Ilkay Gundogan came agonisingly close to capping off the perfect half of football away to Chelsea on Sunday.

As we reach the halfway stage of the season, Chelsea, Spurs and now Manchester United have all been talked up as potential title contenders, but on this latest showing you’d be daft to write off Pep Guardiola’s men.

Stepping onto the pitch with a point to prove as if they were Dr. Dre stepping into the studio to record ‘Forgot About Dre’, City produced a first-half performance to remember at Stamford Bridge.

The hosts had the better of the first 10 or 15 minutes, but City seemed to spark into life when Kevin De Bruyne – playing as a false nine – was played in for a one-on-one by Joao Cancelo.

He missed, but from then on City were clicking – and Chelsea couldn’t live with them. For 30 scintillating minutes, this looked every bit the team that won-back-to-back titles with 100 and 98 points respectively. Even off-colour last year, they finished 15 points ahead of third.

Gundogan*, so often an undervalued cog in the City machine, was front and centre on this occasion.

Opening the scoring after 18 minutes after making Thiago Silva look his age with a perfectly-executed feint on the edge of the box, he didn’t waste the opening he’d done so well to open up and rocketed the ball past Edouard Mendy.

Ilkay Gundogan scored Manchester City's first goal, finishing off a spell of passing with this slick turn and finish 🔥🇩🇪 Could Mendy have done better?

An even better finish from Phil Foden followed three minutes later after a similarly well-worked move. On 34 minutes, De Bruyne extended the lead by rounding off a rapid counter. Not long after, Foden missed a golden chance to head in a fourth.

This was the irresistible football that no other team had an answer to in that all-conquering two-year period. Chance after chance created after impossibly sophisticated positional interplay. Every pass executed perfectly.

At no point was this more evident than in the 43rd minute, when Raheem Sterling went bursting forward through the centre of the pitch, riding a challenge from N’Golo Kante to leave him in his dust before releasing it to De Bruyne.

The Belgium international – let’s just take a minute to say: f*cking hell he’s good – in turn played the ball into the penalty area to Foden, who crossed first time into the six-yard box.

Gundogan had run just ahead of the ball but still had the speed of thought to get a decent backheel connection with the ball, emblematic of how self-assured the German and City as a whole were then playing.

Unfortunately, Gundogan couldn’t quite direct it on target, sending the ball just wide of Mendy’s post.

It would have been the perfect coda to cap off a stunning, statement half of football, but it wasn’t to be. Chelsea still got the message loud and clear; now it’s time for the rest of the Premier League to sit up and listen to what Pep’s side have got to say.

*Buy Ilkay Gundogan and thousands of other players on Football Index. 18+, UK and Ireland customers only, begambleaware.org. T&Cs apply.