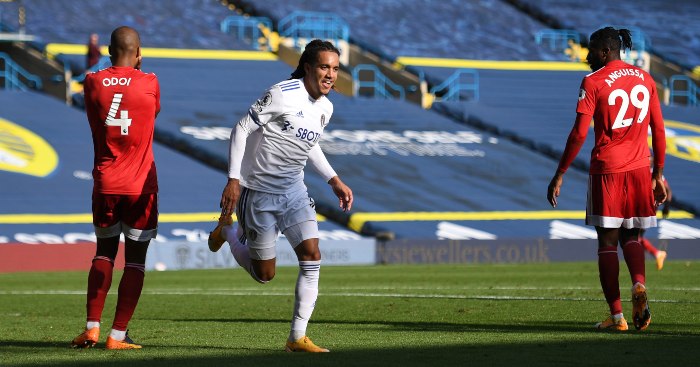 Whenever you watch Helder Costa run at a defence with the ball at his feet, you can almost see a footballer trying to remember how good he can be.

There are times when Costa lines up an opposition full-back, takes a big brave gulp, and then looks almost surprised when – to quote Leeds United’s greatest right winger and record goalscorer, Peter Lorimer – “you’d discover [the full-back] was the tosser you always thought he was“.

Costa’s debut season at Leeds provided just enough glimpses of the quality that convinced Marcelo Bielsa he was one of the missing pieces of the jigsaw to secure promotion at Elland Road, but there was a general undercurrent of frustration on the part of supporters and a lack of conviction and confidence on the part of the player himself.

Now 26, Costa arrived at Leeds amid the promise of a big fee and a highlights reel showing him dismantling Championship defences over and over again with Wolves. Lacking context, it was largely overlooked that Costa’s brightest season at Wolves came not under Nuno Espirito Santo’s league winners but rather Paul Lambert’s relegation battlers.

But the winger missed the start of the following campaign after undergoing surgery to correct a long-standing ankle injury, returning to find Nuno had crafted a side suddenly challenging at the top of the table. The reigning Player of the Season had to settle for starting fewer than half their league games in 2017-18.

Even fewer starts upon promotion with Wolves prompted his switch to West Yorkshire, where Leeds fans grew accustomed to watching him flicker in and out of games. Playing on the front foot against cramped defences was never likely to suit his style, but Costa had a tendency to look timid, so much so that even his shots appeared apologetic.

The progression of Jack Harrison in his second season under Bielsa offered hope for Costa’s future, but after a particularly dismal miss at the end of a difficult draw against Luton – when the tension of a Championship promotion race threatened to wrap its hands around Leeds’ throat – the promise of potential offered little consolation.

“Shame, as he’s class on his day, he just hasn’t had his day for about two years now,” were the words of a Wolves-supporting friend.

Injury saw Costa miss Leeds’ next fixture, when Gjanni Alioski impressed in his place as the Peacocks bounced back with a 3-1 win at Blackburn.

Sticking with Alioski appeared the obvious move, only for Bielsa to place a huge amount of faith in Costa by restoring him to the starting XI for the visit of Stoke five days later. Costa repaid Bielsa’s trust, scoring once and providing two assists to help Leeds thrash the Potters 5-0 before playing a key role in Pablo Hernandez’s dramatic winner at Swansea to leave the club on the brink of promotion.

While the helter-skelter 4-3 defeat at Liverpool, Leeds’ first game back in the Premier League for 16 years, was meant to be the type of game that saw the winger thrive in open spaces, there was a worrying reminder of Helder Costa 1.0 shortly after half-time.

With Leeds on the break in Liverpool’s half, he had both Patrick Bamford and Luke Ayling making runs ahead of him, only to roll a meek pass straight into the path of two Reds players stood side by side.

Around 15 minutes later, Costa collected the ball in a similar position out wide on the right with Leeds players once again flooding forward. This time, something seemed to click, as if 12 months of murderball, regular first-team football and programming from Bielsa saw his mind and his muscle fibres finally coalesce.

Suddenly Costa could see The Matrix, patiently waiting for Ayling’s run into the penalty area to open up space for Mateusz Klich to ghost into the box unnoticed. Where his previous pass had been apprehensive, on this occasion it was more forceful, perfectly weighted for Klich to flick up and volley into the bottom corner in one swift movement.

Fast forward to Leeds’ next Premier League fixture and this time Costa hit the ground running, opening the scoring against Fulham with an emphatic half-volley after just five minutes.

Brimming with confidence, midway through the second half the ball was calmly dispatched into a similar destination after Bamford’s cut-back had found the winger patiently waiting on the penalty spot to make it 4-1.

It was Costa’s first brace of his career. Having scored 10 league goals in 2016-17, the double took him to 12 league goals in just over three seasons since. Five of those have come since December 2019.

After Klich finished off Costa’s pass at Anfield, the inimitable Peter Drury screeched in commentary: “Boy, they are welcome back. They are very welcome back.”

When it comes to Helder Costa, those words were more fitting than he could have realised.