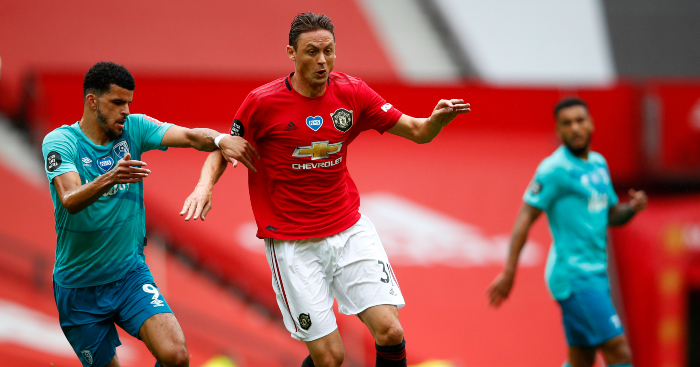 Nemanja Matic is not built to be a footballer loved in the modern game.

While the world is forcibly moved on its axis by gegenpressing, counter-attacks and Mason Greenwood, Matic likes to sit in, keep things simple, stay still quite a bit. Surrounded by eager young pups out to impress, Matic often looks like the old family labrador, never straying too far from the comfort of its bed in front of the fire.

Plenty of Manchester United fans have wondered whether it’s time for that final trip to the vets, but just as Ole Gunnar Solskjaer’s side have started to speed up, Matic has shown the importance of occasionally slowing down.

Over the first half of the Premier League season, Matic played just 160 minutes in those 19 matches. Since then, he has started 17 of United’s 24 games in all competitions, earning a new three-year contract after starting the campaign tipped to leave on a free in the summer. The man dumped twice by Chelsea has appeared out of step at Old Trafford on numerous occasions yet continues to survive, an old dog with a cat’s nine lives.

Matic’s revival has put something of a temporary pause on the rise of Scott McTominay and resurgence of Fred. While the younger, more exciting duo may have more to offer in United’s future, the Serbia international has been the ideal anchorman for the here and now.

Most surprisingly, the 31-year-old’s influence has only become more apparent since the arrival of Bruno Fernandes and return to fitness of Paul Pogba. Fred and McTominay may be more likely to join in the fun created by the form front five in the Premier League, but Matic gets his kicks in a different way – often, it must by said, by kicking people.

A key player in Chelsea’s last two title triumphs, Matic is the perfect candidate to happily sacrifice himself to provide balance for Fernandes and Pogba’s effervescence. He may lack the dynamism of some of his peers but, with plenty of energy around him, his experience and intelligence in reading of the game offers the ideal springboard to break up opposition attacks and launch United’s own – as evidenced by his role in United’s third goal at Brighton.

Greenwood’s assist and Fernandes’ finish may have grabbed most attention, but Matic identifying the threat in front of United’s penalty area before volleying a superb pass out wide created the opportunity in the first place.

Plus, every squad should have space for a midfielder with a left foot that can do this…

His first goal for the club, back in 2018, was pretty special!pic.twitter.com/lPtKqkzT8j

Matic will be all too familiar with the feeling of coming in and out of vogue throughout his time in England. Even Jose Mourinho, the man who described the midfielder as his “assistant coach”, seemed to lose faith in the player during that disastrous title defence at Chelsea, subbing him on and then off again in an embarrassing 28 minutes against West Ham.

He thrived once again under Antonio Conte, only to be sold after winning a second title in 2016-17. “I wouldn’t have let him out of the building, I would have chained him to the training ground walls,” was the verdict of Phil Neville as the Blues saw yet another title defence end in ruins upon the player’s departure.

You suspect having experienced so many highs and lows, Matic is the best person to keep a perspective on what he can and can’t offer.

Matic may not be built to be loved in modern football, but he has proved better than most at surviving in it.