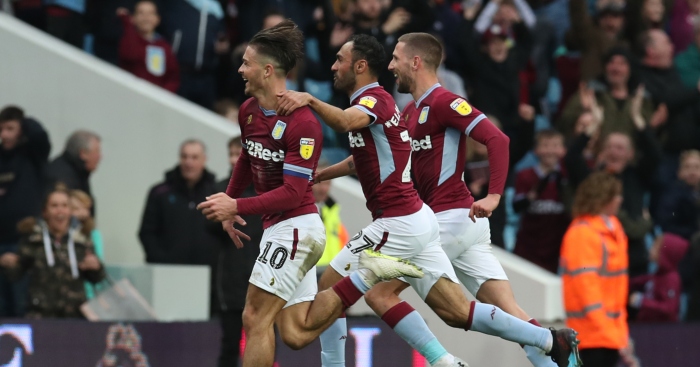 It was a big weekend of Premier League football, but Aston Villa’s Jack Grealish reminded us there was more to the English games than the teams battling it out at the top.

On Saturday evening, as Declan Rice nodded in West Ham United’s opener against Newcastle United, it could have been easy to forget about another young man who made the difficult choice to declare for England ahead of Ireland at international level.

Jack Grealish might be a little further from a senior call-up, but his performance in Aston Villa’s comprehensive victory over Derby County reminded us that he shouldn’t be removed from the picture altogether.

Grealish has played 22 times for Aston Villa in the Championship this season, during which time they have picked up 35 points – an average of 1.6 per game.

The 13 games he has missed have brought just 13 points: with 1.6 points per game throughout the season, the club would be in the final play-off place rather than six points outside it.

Under Dean Smith, the club has also tended to score more goals with the 23-year-year-old in midfield, specifically 25 goals in 10 games with Grealish compared to 16 in 13 with him missing.

Within 45 minutes of Grealish’s first-team return at home to Derby County, Villa were four goals to the good against a team which hadn’t shipped four in ninety minutes since way back in August.

Stats don’t tell the whole picture, though – if they did, some might point to Grealish’s record of just three goals all season and therefore miss out on watching and rewatching one of the greatest goals to grace Villa Park in a long time.

The strike has the celebratory effect of a champagne cork being popped, with the tension of the ball being sent across from the corner flag by Glenn Whelan followed by the release of pressure as Grealish arrows the ball into the corner of Scott Carson’s net.

As Whelan floats the ball over, it would be easy for Grealish to take the time to contemplate all manner of things, from what he’s having for dinner to whether Green Book deserved to win Best Picture at the Oscars, but he is patient enough to maintain his focus.

If some players seem to always know where the camera is for their celebrations, Grealish appears to identify the best angle before taking the shot, figuring out that everyone watching will have a better view if he hits the ball back across Carson rather than driving a flatter shot towards the opposite corner of the net.

Or perhaps he just wanted to avoid the comparisons with Paul Scholes, who fired in a volley from similar range at Villa Park after a corner was cleared to him back in 2006.

Still, even Scholes’ effort wasn’t as emphatic, and there was almost a sense of surprise in his reaction to the ball hitting the underside of the bar and dropping into the back of Gabor Király’s net. The outcome of Grealish’s strike, in contrast, never once felt in doubt.

Grealish has some form for this kind of thing, too, with a strike during last season’s victory over Cardiff City which was almost more Scholes-esque.

On that occasion, rather than having the time to watch the ball drop and prepare the celebration before the strike, he required quick reactions to watch the trajectory of Sean Morrison’s clearance, adjust his body, and fire a swerving volley in off Neil Etheridge’s left-hand post.

While we might have seen Aaron Ramsey proclaim “this is my pitch” after scoring Arsenal’s opener at Wembley on Saturday, Grealish doesn’t need to vocalise his claim to Villa Park.

Jack Grealish’s early development can easily trick people into thinking he’s older than his 23 years, but he certainly still has time on his side.

Goals of this quality don’t roll around that often outside the Premier League, or even in the top division, so he already has a bit of a headstart on those around him.

Even if he doesn’t fulfil his potential, and just becomes a wonder-goal merchant but nothing more, is that even such a bad thing?