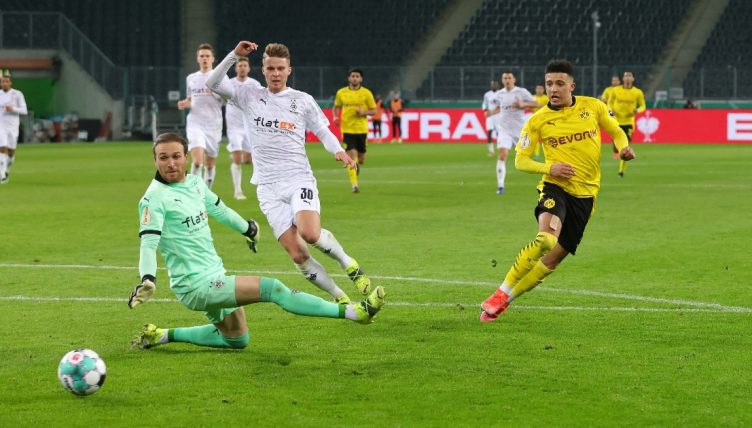 Is there anything more satisfying in football than a perfectly-executed counter-attack? One finished off the inside of the post, maybe.

Thanks to Erling Haaland and Jadon Sancho, we were treated to just that for Borussia Dortmund‘s match-winner in their DFB-Pokal quarter-final against Borussia Monchengladbach.

Intercepting the ball on the edge of their own box after a Gladbach corner, Dortmund were absolutely ruthless in exploiting the space afforded them.

Four players involved, nine touches, three passes (two of them first-time) and just 12 seconds between Dortmund getting the ball and sticking it into the back of the net at the other end. Brutal efficiency.

It helps when you’ve got players like Haaland, who sprinted beyond his markers as if he were a high school kid turning up at a primary school sports day, and Sancho, who is increasingly becoming a dead-eyed killer in front of goal.

The England international took one touch before a perfectly-placed bottom-corner finish.

Back in 2015, analytics writer Michael Caley divulged the numbers behind exactly the unique opportunity presented to teams defending corners, and this type of goal in particular.

“From the roughly 13,000 corner kicks which did not result in a shot, about 1,800 lead to a counter-attack that reached the opposition final third,” he wrote in the Washington Post.

“There were 526 shots from counter-attacks off corners and 72 of them were scored. That is a scoring rate about 40% better than average.

“Overall, compared with a scoring rate from corner kicks of about 3.5%, there is also a goals-conceded rate of about 0.4%.”

It’s something that gamers have complained about on various editions of FIFA, whereby you’ve often been even more likely to concede on the counter in the game than in real life.

If you’ve played it regularly, you watch this goal and can practically feel your synapses clicking into gear, with twitchy fingers like a backseat driver intuitively reaching for pedals that aren’t there.

It’s easy enough on FIFA. Somehow Dortmund made it look just as easy in real life.