Sancho and Haaland’s farewell performance was one to savour 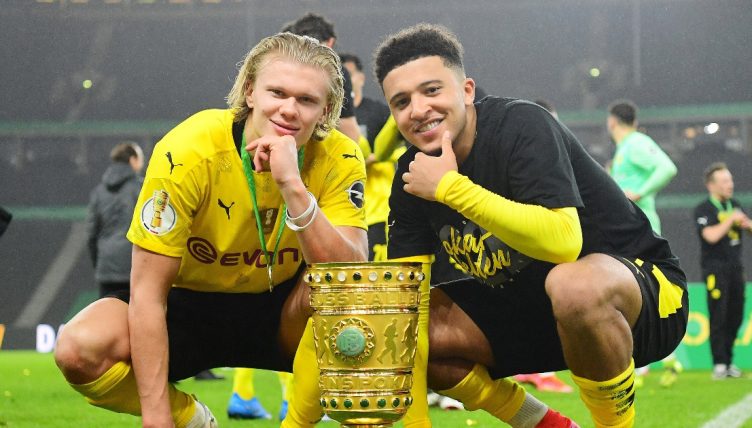 Romeo and Juliet. Carmen Electra and Dennis Rodman. Birmingham City and Cristophe Duggary. Sometimes a short-term relationship can leave the deepest of impressions.

A reciprocated romance, where an expiry date is common knowledge, goes against society’s conventional yearning for a happy-ever-after. They can leave somebody feeling more alive than they ever thought possible.

Erling Haaland and Jadon Sancho must be experiencing something similar right now.

Two of the hottest young players in world football have been the staple of gossip columns for months now.

Not about their budding bromance but with rumours that the game’s richest clubs are interested in their services.

Manchester United want both players, which stands about as much chance of success as me asking Maya Jama out for a drink.

With Barcelona, Real Madrid and Chelsea among those sniffing around Haaland, there seems little hope of the two playing for Borussia Dortmund next season.

With this in mind, the pair decided to treat the German Cup Final against RB Leipzig as their last opportunity to enjoy playing with each other. A final flash of youthful promise before the all-consuming nature of superclub football takes over.

The Olympiastadion in Berlin was a fitting stage for such talent. It’s a place of astonishing beauty, with a storied history from Jesse Owens to Zinedine Zidane and a sense of grandeur few venues can match.

And Borussia Dortmund seized the occasion and tore into their opponents.

It only took five minutes for Sancho to open the scoring with a beautiful curling shot that left Leipzig goalkeeper Peter Gulacsi helpless. It would be a night of torment for the Hungarian shot-stopper.

Haaland felt obliged to get in on the act and only had to wait a further 20 minutes before doing so.

Dayot Upamecano is rightly considered one of the most promising defenders in the world but Haaland decided to rag-doll him simply because he could.

After collecting possession, the Norway striker brushed him aside with the ease of Nelson Muntz swatting aside Milhouse van Houten and powered towards goal. Upamecano was left prone on the turf for his problems.

The finish was deceptively tricky; Haaland’s run took him to the right of the penalty area and Gulacsi was well-placed to stop any effort. Yet this already supreme goalscorer had the answer and flicked a deft effort into the bottom corner.

Just look at Haaland here. Makes Upamecano look like a U15 player pic.twitter.com/zGDbzvPNdB

By now, Leipzig already had the air of opponents begging for mercy and were unable to cope with the speed and power of Dortmund’s play.

Sancho would show them no mercy and doubled his own goal tally on the stroke of half-time.

Marco Reus was released and could have completed War & Peace in the time it took for any Leipzig defender to scramble back and challenge.

Unfortunately for them, this simply left Sancho unmarked. Reus picked the precise moment to square the ball, leaving the England winger to apply the finishing touch.

Of course, it wouldn’t be Jadon Sancho if he didn’t leave a poor defender on his arse before tucking home the ball.

Dortmund went on to secure a serene 4-1 victory to decorate their sometimes difficult season with some silverware. After the game, the bromance between their two-star players was apparent for all to see.

Sancho gave an indication of the mentality that should see him bestride elite football for a decade. Speaking on the Berlin pitch, he said: “I’ll look back at this and I am going to be very disappointed for not scoring a hat-trick.

“We knew it was going tough but it was a long time coming. We should be winning trophies season after season.”

Sancho, and Haaland too, will no doubt spend their careers collecting trophies in a frankly indecent manner.

But Thursday night’s final was probably the last we’ll see of the two friends playing together for some time. The memories they’ve created will insulate the hearts of many who saw them together in the years to come

Their short-lived and productive relationship will never be forgotten by them or the Borussia Dortmund fans.